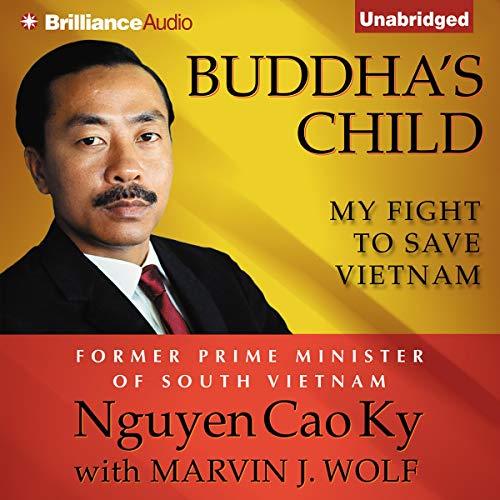 Even after 25 years in America, former South Vietnamese Prime Minister Nguyen Cao Ky is regarded as a national hero by three million fellow expatriots. He travels widely in the US and abroad, and is recognized and applauded by former US servicemen, to whom he remains a charismatic and admirable figure.

Buddha's Child will flood the shadowy corners of South Vietnam's Byzantine political world with the bright light of truth. Ky will describe the Americans and their activities from the perspective of the Vietnamese patriot.

Condemned by US Defense Secretary Robert McNamara as "the absolute bottom of the barrel," Ky was not expected to survive a week in the office into which he was thrust. Instead, he lasted three years, until he wrote himself out of office by penning the country's first constitution.

What listeners say about Buddha's Child

Amazing insight about the Vietnam War from a former Vietnamese leader

Ky’s book was eye opening. I have read many books and studied a lot about the Vietnam War, but his book really helped me understand why South Vietnam struggled and eventually collapsed.

Ky is able to identify specific problems, but is also willing to acknowledge where he made mistakes as a leader, and provides suggestions as to what could have been done better.

Overall I found the book to be entertaining and and informative, though he does come off as a bit cocky on a few occasions. Nonetheless, I think the lessons he provides are invaluable to a new generation of American military and political leaders.

Many of the issues he encountered as a leader are the same problems that America has been experiencing in Iraq and Afghanistan. Fortunately, Ky provides suggestions and insight on how to solve these problems. It would be a great read for anyone involved in working with nation-building or foreign ally support.