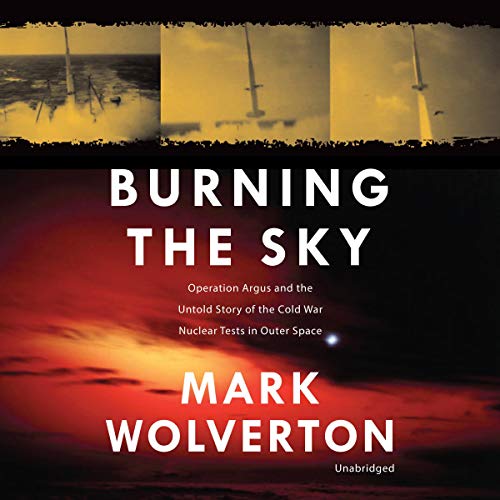 Written by: Mark Wolverton
Narrated by: John Lescault
Try for $0.00

After the Soviet Union proved to the United States that it possessed an operational intercontinental ballistic missile with the launch of Sputnik in October 1957, the world watched anxiously as the two superpowers engaged in a game of nuclear one-upmanship. Amid this rising tension, eccentric physicist Nicholas Christofilos brought forth an outlandish, albeit ingenious, idea to defend the US from a Soviet attack: detonating nuclear warheads in space to create an artificial radiation belt that would fry incoming ICBMs. Known as Operation Argus, this plan is the most secret and riskiest experiment in history, and classified details of these nuclear tests have been long obscured.

Combining his investigation of recently declassified documents with more than a decade of experience in researching and writing about the science of the Cold War, Mark Wolverton tells the unknown and controversial story of this scheme, chronicling Christofilos' unconventional idea from inception to execution, and examines the scientific, political, and environmental implications of Argus, as well as that of the atmospheric tests that followed.

Burning the Sky is an engrossing audiobook that will intrigue any lover of scientific or military history and will remind listeners why Project Argus remains frighteningly relevant nearly 60 years later.

What listeners say about Burning the Sky

For the science minded, those that worked as Cold War Worrier's, those who are interested in the Nuclear Age and how we got to where we are today....This is one book I'd certainly recommend.

I listened only because it was briefly free

I'm a cold war historian to the depth of my being, it is--i s you not--the third thing I would say about me and human kind of goes without saying (I hope... maybe?) so second thing and, real spit I would only cop to number two around people I respect so! in an internet/dating/bs getting to know you jive that cold war bit would be #1. that said this book is long on science that I couldn't care less about, really they go boom huh? big boom? k, and short on social and political factors that are actually fascinating to me. so science people with mild historical concerns dive in, history buffs don't waste ya time...

I mean I'm sure dude knows what he's talking about and it's read well just wasn't for me.

Really important work regarding nuclear testing and whispers of issues in the future. Really great information on an important subject.

For me as interested in history of science and history of atom bombs, and more this was just a gem.
Most of it I just did not know....
* Wide historical background given
* Very well read

Liked it, and didn't

I really enjoyed the first couple chapters, about Christofilos, but then this book took a strange turn. Kind-of all-over-the-map, like a bunch of historical facts in search of a story-line requiring me to figure out what was important. By the end, felt like a sausage grinder loaded with facts.

Story was interesting but the reading by what seemed like a robot put me to sleep.

If you enjoy historical science and Cold War era secretive operations this is a must. I had never heard of these military operations. Amazing trails and tribulations of the success and failures of these operations will keep the listener engaged.

Very interesting, but not very entertaining

This was not a bad read. The story was very interesting and it is one that I had never heard before. I thought that the author was much like Stephen King, another author I like a lot, but who I think must get paid by the word. In other words, it might have been a better book overall if it had been about half as long. The narrator was not very interesting to listen to either. Not bad, but not great. But for the story alone, it's a good read.

Hard to listen to!

Story is very interesting. But the narrator’s staccato manner is horribly annoying! He sounds like a computer voice reading new words.

THE DETAILS IN THIS BOOK WITH RESPECT TO THE EVOLUTION OF THE ARMS RACE IN NUCLEAR CAPABILITY TO THE SPACE RACE ARE SIMPLY OUTSTANDING. THE BOOK FLOWS METHODICALLY AND THE AUTHOR PORTRAYS THE ESSENCE OF ITS THEME IN A MOST ELOQUENT FASHION. IT IS READ IN A SUPERB FASHION. GREAT BOOK!