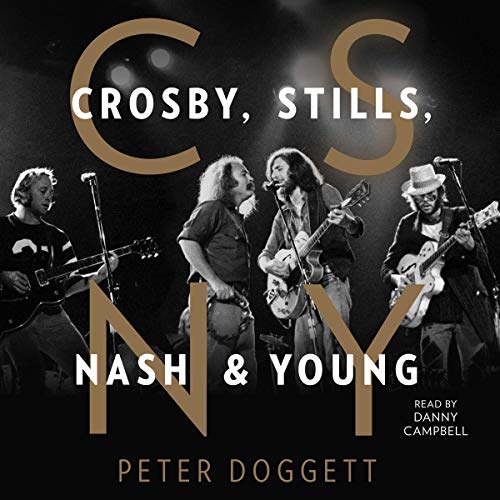 The first ever biography focused on the formative and highly influential early years of “rock’s first supergroup” (Rolling Stone) Crosby, Stills, Nash, and Young - when they were the most successful, influential, and politically potent band in America - in honor of the 50th anniversary of Woodstock and the formation of the band itself.

The years from 1969 to 1974 were true golden years of rock 'n’ roll, bookmarking an era of arguably unparalleled musical power and innovation. But even more than any of their eminent peers, David Crosby, Stephen Stills, Graham Nash, and Neil Young channeled and broadcast all the radical anger, romantic idealism, and generational angst of their time. Each of the members had already made their marks in huge bands (The Hollies, Buffalo Springfield, The Byrds), but together, their harmonies were transcendent.

The vast emotional range of their music, from delicate acoustic confessionals to raucous counterculture anthems, was mirrored in the turbulence of their personal lives. Their trademark may have been vocal harmony, but few - if any - of their contemporaries could match the recklessness of their hedonistic and often combative lifestyles, when the four tenacious, volatile, and prodigal songwriters pursued chemical and sexual pleasure to life-threatening extremes.

CSNY chronicles these four iconic musicians and the movement they came to represent, concentrating on their prime as a collective unit and a cultural force: the years between 1969, when Woodstock telegraphed their arrival to the world, and 1974, when their archenemy Richard Nixon was driven from office, and the band (to quote Graham Nash himself) “lost it on the highway”.

Even 50 years later, there are plenty of stories left to be told about Crosby, Stills, Nash, and Young - and music historian Peter Doggett is here to bring them to light in the meticulously researched CSNY, a quintessential and illuminative account of rock’s first supergroup in their golden hour for die-hard fans, nostalgic flower children, and music history aficionados alike.

Peter Doggett and David Browne, experienced rock journalists, have both published histories of the group Crosby, Stills, and Nash (and Young). "Group" isn't quite the right word — the three musicians were clear from the beginning, even if the rest of us weren't, that their albums would be the result of a loose coalition rather than the product of a "band." Each would continue making solo albums or playing for other groups, coming together whenever the time was right.

Of the two books, I prefer Doggett's, at least as a starting point. Doggett seems to have a better feel for the music: at any rate, I found myself firing up my MP3 player to listen to the songs he discussed, something that I did far less often when listening to Browne's account. (I don't always agree with Doggett; he dismisses the later album "American Dream" as an inferior effort, but I enjoyed it.)

Stephen Stills comes across as one of the more interesting characters in the book: prodigiously talented, unstoppable in the studio, and afflicted with crippling self-doubt. Doggett describes a party in England that Stills attended, along with three of the Beatles and a host of other music luminaries: Stills sounds like a high school kid, desperate to be accepted as one of the in-crowd and wretchedly ill at ease. "But you're STEPHEN STILLS!" I wanted to shout into the audiobook. His vulnerability is as surprising as it is appealing, and in later interviews, he shows an equally surprising level of self-awareness. Yeah, he says at several points in the book, I was really being a jerk, I wish I'd handled that better.

One of the surprises is Neil Young. To me he's always seemed like a giant in the rock world, but according to a Doggett, he originally came into the group as a junior member and owed some of his later stardom to his participation on CSNY albums. Invited into the group as an equal participant, Young showed up when he wanted to show up and left when it wasn't working for him anymore. He was often seen as a divisive influence, sometimes abandoning the group without notice in the middle of a tour.

The narrative ends in 1974 with a shambolic tour that crossed America and ended with a concert at Wembley in England. They had been pushed by record executives into playing in stadiums rather than the more intimate settings they preferred. Unable to hear themselves play, their harmonies — one of their most defining qualities — often wandered embarrassingly off track. The Wembley concert was filmed, and when they saw a rough cut of the footage, they were aghast at how awful they sounded. According to Doggett, Nash left the room in tears.

Doggett concludes the book with a 45 minute postscript that quickly summarizes events since 1974. The book left me grateful, once again, for the beauty these four people created, and sad that so many possibilities were sacrificed to drugs and alcohol. Ego was always going to be a problem in CSNY, partly because all had established careers before the group came together; but the problem was made significantly worse by chemicals. In Doggett's account, all were heavy users throughout most of their joint careers, Crosby having the worst cocaine problem (although Stills sustained his marathon studio sessions — days long at times — with cocaine). Tables were often set up behind the stage with various drugs, and the musicians would stop by for a "refresher" during the performance. Several people on the periphery of the group — friends, roadies, other musicians — died of an overdose, often of heroin (something Neil Young responded to with "The Needle and the Damage Done").

The narrator, Danny Campbell, delivers the entire book in a declaratory, eyes-agape style, hardly pausing to differentiate the epigrams that mark breaks in the narrative from the surrounding text. And yet I kept turning to this audiobook over six or seven others I was listening to and sitting in rapt pleasure as the story unfolded. So even though that style of narration usually puts me off, in this case I have to say it wasn't a problem; it may even have helped the forward-moving propulsion of the narrative.

Enjoyable bio but a touch too melodramatic in tone for me. The reader's style reinforced this. The content was interesting though.