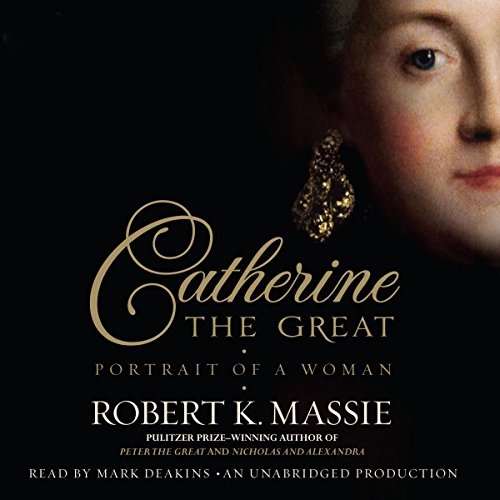 The Pulitzer Prize–winning author of Peter the Great, Nicholas and Alexandra, and The Romanovs returns with another masterpiece of narrative biography, the extraordinary story of an obscure young German princess who traveled to Russia at fourteen and rose to become one of the most remarkable, powerful, and captivating women in history.

Born into a minor noble family, Catherine transformed herself into Empress of Russia by sheer determination. Possessing a brilliant mind and an insatiable curiosity as a young woman, she devoured the works of Enlightenment philosophers and, when she reached the throne, attempted to use their principles to guide her rule of the vast and backward Russian empire. She knew or corresponded with the preeminent historical figures of her time: Voltaire, Diderot, Frederick the Great, Empress Maria Theresa of Austria, Marie Antoinette, and, surprisingly, the American naval hero, John Paul Jones.

Reaching the throne fired by Enlightenment philosophy and determined to become the embodiment of the “benevolent despot” idealized by Montesquieu, she found herself always contending with the deeply ingrained realities of Russian life, including serfdom. She persevered, and for thirty-four years the government, foreign policy, cultural development, and welfare of the Russian people were in her hands. She dealt with domestic rebellion, foreign wars, and the tidal wave of political change and violence churned up by the French Revolution that swept across Europe. Her reputation depended entirely on the perspective of the speaker. She was praised by Voltaire as the equal of the greatest of classical philosophers; she was condemned by her enemies, mostly foreign, as “the Messalina of the north.”

What listeners say about Catherine the Great

Well organised. Great pace. Enjoyed the narration. Every chapter was fascinating in its own right. Thoroughly enjoyed.

A most excellent book. Exceptionally well written, well read, and fascinating. If you have any interest in history especially Russian history, this is a must read.
David

This book is a must read/listen for anybody who likes history. I found it very inspiring.

If you could sum up Catherine the Great in three words, what would they be?

In any telling of the life of Catherine the Great, Catherine must be the central character. Nobody but Catherine herself could have invented her.

It is clear that the narrator is simply reading words (which he does quite well) but has no deeper connection to the subject. Constant and consistent mispronunciation of Russian German and French words and names (and not just the difficult ones) are distracting and make one think he did no preparation. This may seem like a trivial point, but a good reading is one where one feels like the narrator knows what he/she is talking about and that is not the case here.

There are genuinely amusing, genuinely moving and genuinely horrifying moments.

This is a well paced and lively telling of a great story. It does not dig very deep into the history of the period, the mind of the protagonist or the culture of the period. But presents the information that it does provide in a manner that is clear and understandable for anyone with no background on the subject and that is no small accomplishment

Robert Massie did an excellent job telling this incredible story of Catherine the Great. The narration was equally excellent. I should make a note that I was a little concerned about buying this book in audible form. I find that stories about royal families and their subjects can get a bit confusing when it comes to lineage, who did what…etc so I typically buy hardcopy books so I can refresh my memory by looking at previous chapters. I clearly didn't need to worry about that with this audible version. The story was well organized and the author takes the time to refresh the readers’ memory from time to time. I was disappointed to reach the end. Now I am going to purchase Peter the Great from the same author. I can't wait!

I had an opportunity to visit St. Petersburg, Catherine’s Palace in Pushkin, and the Hermitage this summer. During the trip we heard much about Catherine the Great, including this book recommendation. It did not disappoint. Massie does an excellent job of making 18th Century European history come alive. It is an improbable story: a princess from a small German principality and minor noble family emerges as the Czarina of Russia after the abdication and death of her husband, Peter III. Not only Czarina, but a most hard-working, capable, patriotic, and winsome head of Russia, known for her enlightened views and very able administrative and leadership qualities. For that reason she became known after her death as Catherine "the Great."

The book sets forth Catherine’s story in very personal terms, depicting her ambitions, hopes, loves, sufferings, frustrations, fears, and triumphs. As a story it makes the history and events of the time much more memorable and real, particularly as compared to the chronologies in which history is more typically presented. I found the book very enriching and greatly expanded my understanding of the era and the history of Russia.

It's hard to believe this woman accomplished so much in her life without Internet, computers, or modern transportation. This is an excellent book, and I loved the fact that so much of it was obtained from Catherine's own writings. Excellent book!

This is in no way a dry historical rendition, just the opposite! It is by far the best book ever written, by Pulitzer prize-winning author Robert K. Massie, of the life of Catherine The Great. It is also excellently narrated by Mark Deakins, best narrator I've ever had the pleasure of listening to! It starts when she is 14 and on her way from Germany to Russia. It is presented in such a way that she, and the events in her life, come alive and you understand her completely. It is meticulously researched. I enjoyed it completely, so much so, that I'm sad it's finished. You learn about every aspect of her life. The author used her own correspondence, writings and the writings of others about her, her work and what was happening in Russia along with other European courts and the courtiers of both to receive an incredible rounded understanding of the times in which she lived along with who Catherine was as a person, herself. The contrasts between the two are amazing! She and Queen Elizabeth I, are the two greatest monarchs who ever lived! I'm a huge fan and devotee of Elisabeth I, she is an amazing woman and was an equally amazing monarch. I've read less about Catherine, but this book has shown me more of Catherine than any other I've read, and puts her in the same level as Elizabeth, they are equally amazing woman when looking at them, their reins and the times in which each takes place (Catherine was born aprox. 100 years AFTER Elizabeth died). Read/listen for yourself and form your own opinion, I promise, this one is worth your time and attention. The details and descriptions are fantastic! YOU'RE TURN, ENJOY! UPDATE: I enjoyed this book, the style of writing and the excellent narration so much I listened to it for a second time & enjoyed it just as much if not more than the first time! OVERALL ALL PURE EXCELLENCE!

Any person that is frightened of history books should listen to this. You will be fascinated by this woman and the story is easy to listen to. Not like a Dostoyevsky novel at all so don't worry about being confused by the number and sound of names.

I have recommednded to this book to many freinds.

What was one of the most memorable moments of Catherine the Great?

The 1762 coup, when Catherine and the Orlov brothers overthrew Catherine's husband Peter.

Have you listened to any of Mark Deakins’s other performances before? How does this one compare?

I have not listened to any other books read by Mark Deakins, but I will watch out for him in the future.

I was moved by the love affair of Catherine and Grigory Potempkin.

The book was fast paced and interesting.

What did you love best about Catherine the Great?

The story overall. Some parts are repeated to keep you familiar with the timeline associated with the big events in Catherine's life.

Between tabloid and history

This book is not meant for history lovers. There are snippets of great historical events but most of it is just court drama and gossips from Catherine time. It's not a terrible book but it could have been so much more.

Solid performance by the narrator.

I knew nothing about Catherine The Great, and now just wept from her death at the end of the book. Her incredible life was exquisitely written and beautifully narrated.
it has been a true gift to have been able to listen to this book.