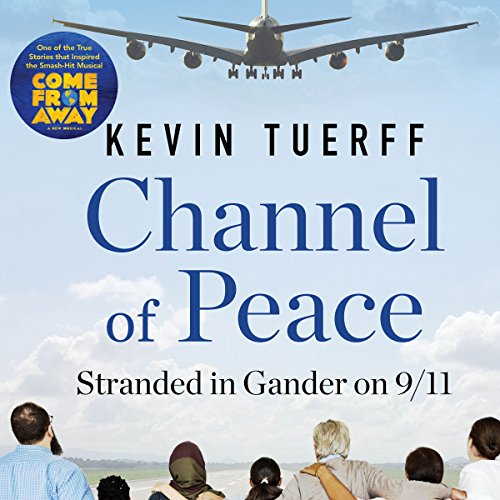 When Kevin Tuerff and his partner boarded their flight from France to New York City on September 11, 2001, they had no idea that a few hours later the world - and their lives - would change forever. After US airspace closed following the terrorist attacks, Kevin, who had been experiencing doubts about organized religion, found himself in the small town of Gander, Newfoundland, with thousands of other refugees or “come from aways”.

Channel of Peace is a beautiful account of how the people of Gander rallied with boundless acts of generosity and compassion for the “plane people”, renewing Kevin’s spirituality and inspiring him to organize an annual and growing “giving back” day. His story, along with others, has reached thousands of people when it was incorporated into the Broadway musical Come from Away.

In Channel of Peace: Stranded in Gander on 9/11, you will find an unforgettable, uplifting tale of goodwill, the strength of the human spirit and hope.

What listeners say about Channel of Peace

For those who do not know the story, Come from Away is based on true events of the stranded airplanes on 9/11 who had to make emergency landings anywhere but the USA. I’m disappointed at the low quality of this book. The story is poorly written and the narrator sounds as though he is just reading the script for the first time. It’s choppy and incredibly awkward to listen to. I desperately want to finish the book because I want to hear the specific details of how the community in Gander welcomed the thousands of strangers into their homes and lives. But sadly, because of the horrible—in my opinion—narration, I don’t know if I will be able to...

a story of hope

We were on a close-of-business deadline for preparing the first grassroots state water plan when the first plane hit. This happened before smartphones and the hyperactive interwebs we have today, so I heard about it in the hallway as I was coordinating various aspects of my group’s responsibilities on the plan. I knew there had been a small plane that had hit the World Trade Center once before and shrugged it off. Word then crept through the offices that it had been a jumbo jet. The folks in computing had hooked up a television, so I walked down to see what looked like a Hollywood movie because it was so unbelievable. Some grumbled of terrorists, but I thought that was premature. After the second jet exploded into the second tower, it was clear what was going on.

Kevin Tuerff, author and narrator, notes in this book that folks of a certain age remember exactly where they were on 9-11, and that is undoubtedly true. Kevin’s experience was life-changing in that on a day that showed the worse of humanity, he experienced the best in Newfoundland. His story isn’t so much that he was stranded in Gander from a trip to Paris; instead, it's about how inspiring those rural Canadians were to him and some 6,000 other stranded plane people.

The Gander story arcs through the book, but the longer arc is Tuerff's relationship with religion as a gay man and how 9-11 and a town good souls brought him back to the folds of the altar cloth. After he finishes telling much of the Gander story, there's a long Moses-in-the-desert-for-forty-years passage about finding his purpose in life that, just when I was wondering where he was taking me, he pulls it all together nicely. There's a sense of wonder and awe at what happened in Gander and what has happened since with Pay It Forward 9-11, interviews, a Broadway play, and now a movie.

This book is a story of helping people and helping you to help people. It's a humanist response to terrorism as well as the temptation of soullessness--and the lack of humanity--that can permeate this modern world. It's a story that can re-ground you and give you hope.

On September 11, 2001 the town of Gander, Newfoundland showed the people from all over the world who were suddenly marooned in a place not of their choice that they had integrity and selflessness as well. Events in the US caused an emergency order for all planes in or headed to the US to land immediately. This meant that the town of Gander, Newfoundland pop. 9000 were suddenly hosting 67 planes and nearly 7000 stunned travelers for 5 days. This is the story of a select few and the development of a grand musical COME FROM AWAY that is even now on Broadway.
I loved that the audio is narrated by THE AUTHOR!

This was a very interesting book, but it felt really brief. I feel like it could have had a lot more detail, though I did quite enjoy it.

Welcoming strangers is a principle every human should abide with, Kevin story is a story of hope.
I encourage everyone to grab a copy.

Not what I expected, but still great

Based on the title, I expected to only go on one journey with Kevin T. I was wrong, and usually that would bother me, but not this time. For the last couple of days, I've been listening to Channel of Peace during my commute. I've laughed and even teared up in places. This was a story less about 9/11 and more about the positive effects that day had on a man from Texas.

I have to admit that I'm not very comfortable with religion and this book has more than its fair share. I appreciate the way Kevin brings his faith into the book in explaining who he was and who he is now after everything he went through.

It's an excellent book and for anyone interested in paying it forward, a great guide on how to begin to do so.