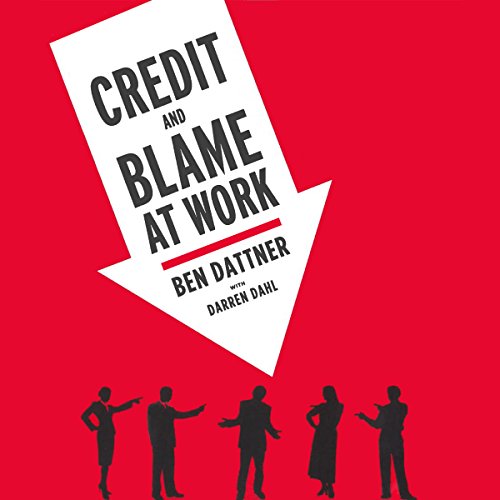 Credit and Blame at Work

From his years of experience consulting to leading companies, psychologist Ben Dattner has discovered that at the root of the worst problems we confront at work is the skewed allocation of blame and credit. In so many workplaces, people feel they're playing a high-stakes game of "blame or be blamed", which can be disastrous for the individuals who get caught up in it and can sink teams and afflict whole companies. Dattner presents compelling evidence that whether we fall into the trap of playing the blame game or learn to avoid the pitfalls is a major determinant of how successful we will be.

The problem is that so many workplaces foster a blaming culture. Maybe you have a constantly blaming boss, or a colleague who is always taking credit for others' work. All too often, individuals are scapegoated, teams fall apart, projects get derailed, and people become disengaged because fear and resentment have taken root. And what's worse, the more emotionally charged a workplace is - maybe our jobs are threatened or we're facing a particularly difficult challenge - the more emphatically people play the game, just when trust and collaboration are most needed. What can we do? We can learn to understand the hidden dynamics of human psychology that lead to this bad behavior so that we can inoculate ourselves against it and defuse the tensions in our own workplace.

In lively prose that is as engaging as it is illuminating, Dattner tells a host of true stories of those he has worked with - from the woman who was so scapegoated by her colleagues that she decided to quit, to the clueless boss who was too quick to blame his staff. He shares a wealth of insight from the study of human evolution and psychology to reveal the underlying reasons why people are so prone to blaming and credit-grabbing; it's not only human nature, it's found throughout the animal kingdom. Even bats do it.

What listeners say about Credit and Blame at Work

Would you listen to Credit and Blame at Work again? Why?

What other book might you compare Credit and Blame at Work to and why?

What does Todd Gaddy bring to the story that you wouldn’t experience if you just read the book?

This will most-likely not be a film, however... "The Blame-Game" is a great title.

I would recommend this book for any corporate team and especially the C-Suite. The book demonstrates that even if a person or a business has no other goal for take responsibility than increased profit, it works. Altruism is not necessary to stop the "Blame-Game"- but... it helps if you have it.

I really enjoyed learning about well researched psychological phenomena and the greater understanding, empathy and opportunity to work and relate to others this book has enabled.

At best - if I can implement a successful fulfilment structure - this book will enable profound improvements in the achievements and fulfilment of myself and those around me.

At least; Some of this information will stay with me and forever positively impact the outcomes of many credit/blame encounters and general harmony with others.