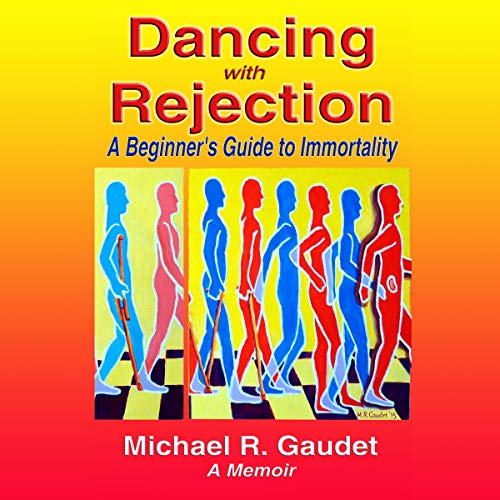 Dancing with Rejection: A Beginner's Guide to Immortality

In 1979, at age 19, Michael Gaudet was diagnosed with end-stage renal failure. Thanks to a kidney transplant from his brother, Michael survived and later rose to prominence as a Canadian painter of monumental murals.

Dancing With Rejection: A Beginner’s Guide to Immortality chronicles the untimely death of Michael’s loving father, our hero’s own near-death experience and his bohemian lifestyle in Canada of the 1970s and ‘80s. A cast of eccentric characters weaves us in and out of lusty tales of romance, gritty medical dramas, and encounters with the paranormal. Written like his murals, in large, bright swaths of sweeping narrative, this is a cosmic joy ride of a listen.

What listeners say about Dancing with Rejection: A Beginner's Guide to Immortality

Before we go on to the review I think there are two things I should say. One is that I've known the author for 5 years. We have never had the pleasure of meeting in person, but I've known him online. The other thing to know is that like him, I too have gone through the entire ordeal from kidney failure, dialysis to kidney transplant.

As someone who, like Michael, has had a kidney transplant, I found the parts of the book touching on these subjects of particular interest. The author has his transplant in the 1970s and what was remarkable was how little the process has changed in the intervening years. Or rather, I should say, how little the experience has changed, because the medical understanding of the process has made enormous strides forwards. But for anyone experiencing this, the experience is what is important because it is deeply personal, frightening, painful and dangerous.
I'm not sure this book would have put my mind to ease before going through the same ordeal myself, but reading about it after having gone through it myself was interesting.

Michael Gaudet is a painter and I couldn't help but notice how he masterfully incorporates the visual in his book. One might be tempted to think that a painter would be overly verbose or dramatic in their description of form, color and texture, but at least for this book, this isn't so. I admire people who can write with economy. So much so that I notice when it is done well, and at least to me, it was striking how he could get me to see what he was describing vividly without wasting a single word. That's an unusual gift and even many seasoned, award-winning authors cannot do this.

I also caught myself wishing that this book had a companion volume of some of his works. Both his works from the time in which the book takes place, and some of his contemporary work. Both to show his development as an artist, but also because Michael uses a very labour intensive painting technique that produces very deep colors and I think it would enrich the text for those not familiar with his paintings.

I know Michael had discussions with his editor about some of the more supernatural parts of the book, and I'm glad he kept them in. They fit. I think his own description of them as magic realism is so spot on because that is exactly what I got from them. They evoked some of the moods that you can find in the works of another great painter: George Tooker. The warm, magic blurring the line between what is real, and what takes place in the mind. Michael is, after all an artist so it works for me.

While reading the book I could easily imagine him being someone I would have appreciated knowing during my youth. In some ways we couldn't have been more different, but in terms of the intensity of passions (both professional and ... otherwise) we were very alike. And I appreciate that in friends.

As a friend i treasured this look into Michael's life immensely. And I chuckled to myself many times while listening to the audio book.

(As for the narrator: he got off to a bit of a rough start, but a few chapters in he got the hang of it. All in all a good performance)