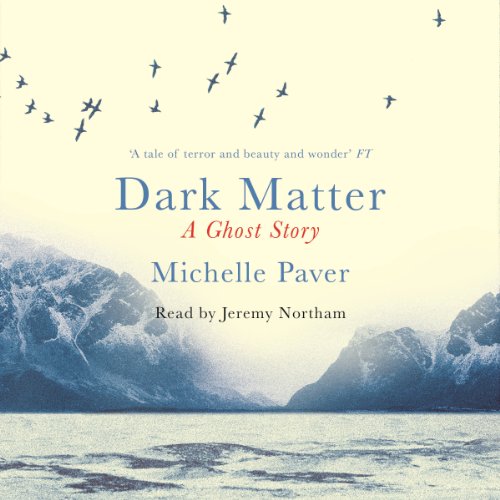 Written by: Michelle Paver
Narrated by: Jeremy Northam
Try for $0.00

January 1937. Jack Miller has just about run out of options. His shoes have worn through, he can't afford to heat his rented room in Tooting, and he longs to use his training as a specialist wireless operator instead of working in his dead-end job. When he is given the chance to join an arctic expedition, as communications expert, by a group of elite Oxbridge graduates, he brushes off his apprehensions and convinces himself to join them.

As the young men set sail from a gloomy Britain on the verge of war, Jack feels the overwhelming excitement of not knowing what lies ahead. Little can he imagine the horrors that await him in their destination, Gruhuken, a place that cannot escape the savage echo of its past.

What listeners say about Dark Matter

Although the author skims over the ghostly aspects of this story, she does produce an excellent melodrama that captures the desolation, isolation, desperation of a man alone in the cold, dark arctic. So, even though this is not a particularly scary ghost story as suggested in the description, it is hauntingly eerie and fascinating. Michelle Paver is an excellent writer and Jeremy Northam is her equal as a narrator.

Terrifying slow burning story with a powerful atmosphere.
My only thought is that the protagonist could have have explored compassion or understanding towards the haunting a bit more. I felt things that never seemed to occur to the character and was a bit frustrated.

My favourite Audible book so far

This book may not be nearly as good if read on paper but as an audible performance was captivating. #Audible1

Dark Matter is in the best tradition of the 'creeping dread' British horror genre, in the manner of M.R. James. The first person narrative is nuanced and very compelling. The novel is a well-researched fictional history of an expedition in the 1930s to a haunted Norwegian bay, far above the arctic circle. Beyond the main stories are themes of poverty, class and hero worship which give the story incredible depth.

The narration by Jeremy Northam is flawless.

This is a grand and at the same time deeply claustrophobic adventure. The setting, between the great wars, is perfect for the precise and scientific exploration of haunting and horrid, menacing presence.

Dark Matter succeeds as an intelligent, evocative and visceral ghost story and its central metaphor remains strong and intact, evolving and gaining depth as the deeply personal narrative unfolds.

Jeremy Northam is superb and reveals how great and majestic a craft narration can be.

An Exhibition to the high artic seems fated to end poorly even before it starts. An uneasy Norwegian captain who knows more than he will acknowledge; all but three of the team struck down before even landing; and gruesome artifacts of other unsuccessful enterprises found on the bay shore at which the team plans to overwinter, all seem to point at the reality that nobody wants to acknowledge: this place is haunted. Shortly after the team arrives uneasiness sets in and through some unfortunate circumstances Jack is to be left for a short time alone to man the station. This is in October 1937 and the sun has already set for the last time of the season. Events are told through the entries in Jack's journal and slowly we watch Jack lose control as terror seeps into every action and every perception. How long can he hold the fort until the others come and save him? He has a radio, dogs and even has a visitor but ultimately the winter is setting in and the ice will soon settle the question of his rescue. Meanwhile every month comes the moonless sky and the nothingness that threatens to consume him.

This is a wonderful piece of horror fiction that slowly ratchets up the tension and uneasiness. It is unsettling yet compelling and was a true “page turner” that I almost listened to completely in one sitting. As I read I wondered: “which is more horrifying: the ghost we see or the ghost we create in our minds?”, “How much of our sanity is linked to the things we call reality – light, color, other people, sound?”, and “Are their things that we don’t understand or want to acknowledge that exist beyond this reality?” Jack must balance these questions with other forces pulling on him, such as rationality, duty, loyalty, honor, and love.

I felt the length and the pacing of the story were perfect. In these days where every novel is part of a trilogy or massive in length, it was refreshing to encounter a tight little story as complete and satisfying as this one. I highly recommend this for fans of horror or psychological thrillers. To me this story had elements of “The Shining”, “The Thing”, and “The Turn of the Screw.”

Jeremy Northam is superb in his narration. Most of the text is in the main character's mind, rather than spoken aloud. Northam's take on this book really brought to light the idea that the character is speaking to himself. The narration brought this book to life.

Would you listen to Dark Matter again? Why?

YES.YES.YES. If you are looking for a creepy, atmospheric haunting with strong character development and an engaging, original story then grab this one!!! This author KNOWS scary. Her ability to write had me absorb every word, the atmosphere she creates is incredible and the fear that accompanies isolation and darkness is executed perfectly in her writing.

Jack is a reclusive, defensive ass...yet I bet anyone could relate on some level, I did.

The bear post.....oh God and the window checking. I don't want to spoil anything!!!

I picked this book based on reviews and I couldn't be more satisfied. I even loved the ending----how many horror writers can successfully pull those off??? I'm a big critic that way. This author has just made it to my top #2 and trust me I read a LOT of horror!!! SO GOOD!

Wonderfully creepy and surprisingly claustrophobic tale. Narration is superb. Very well written. I highly recommend this book to anyone with a love of ghost stories.

I have never read anything by Michelle Paver before so this was a pleasent surprise. A chillng ghost-story set in the most desolate and isolated enviroment imaginable and with characters that really feels alive. I'm usually not very fond of novels written in diary-form but Michelle Paver's prose pulls it through all the way to the ghastly ending.

I recommend the book to anyone interested in good ghost-stories and will certainly look up her other works as well.

This was a pretty good ghost story. Not a ton of action, but the plot builds up nicely to the end. Story is well written with plenty of details and flow to keep you listening well after you stop your car. Recommended.

Would you listen to Dark Matter again? Why?

Yes, years from now when I've forgotten enough details to be scared again. I love books that are well written and truly frightening. It is such a hard thing to find. Dark Matter was nearly perfect. The cold, isolated setting, the blurring of the lines between the supernatural and insanity, made it just believable enough to be truly creepy. It was very well imagined, never rushed or overly fanciful, and not very predictable (as far too many horror and mystery novels are).

Not as good as it could have been

Great idea, great characters, good narrator, slow story, I kept wanting to jump ahead. It held my attention well at first but I struggled to pay attention to the narrator about half way through.