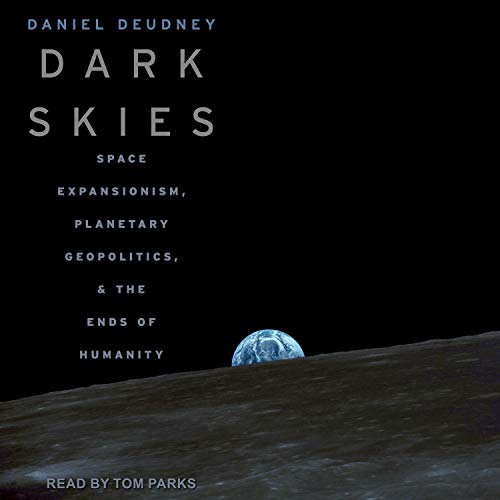 Written by: Daniel Deudney
Narrated by: Tom Parks
Try for $0.00

Would-be asteroid collision diverters, space solar energy collectors, asteroid miners, and space geo-engineers insistently promote their Earth-changing mega-projects. Given our many looming planetary catastrophes (from extreme climate change to runaway artificial superintelligence), looking beyond the earth for solutions might seem like a sound strategy for humanity. And indeed, bolstered by a global network of fervent space advocates - and seemingly rendered plausible, even inevitable, by oceans of science fiction and the wizardly of modern cinema - space beckons as a fully hopeful path for human survival and flourishing, a positive future in increasingly dark times.

But despite even basic questions of feasibility, will these many space ventures really have desirable effects, as their advocates insist? In the first book to critically assess the major consequences of space activities from their origins in the 1940s to the present and beyond, Daniel Deudney argues in Dark Skies that the major result of the "Space Age" has been to increase the likelihood of global nuclear war, a fact conveniently obscured by the failure of recognize that nuclear-armed ballistic missiles are inherently space weapons.

What listeners say about Dark Skies

Heavy on claims, light on evidence

Take this with a grain of salt, as I am what the author so derisively refers to as a "Promethean Optimist", and "Libertarian".
One good thing about the book was a fair warning about ensuring individual freedom on off-Earth colonies.
The rest of the book was just claim after claim that nuclear weapons are space weapons (ok, we get it), and if asteroid orbits can be modified, the Earth will be destroyed. To top it off, if we expand into space, the trans-human boogeymen will come back to eliminate humanity.
The fatal flaw to the author's arguments are that for humanity to be a stay-at-home civilization, *everyone* needs to stay at home. China has already proven that they will not stay at home, even at the cost of dumping spent rocket stages on their own people. If we cede the ultimate high ground to a state that has demonstrated such disregard for individual rights and freedoms as the communist party, then we are already doomed.

While the prose can be a bit stilted, the arguments here are fascinating, novel, and incredibly well argued.