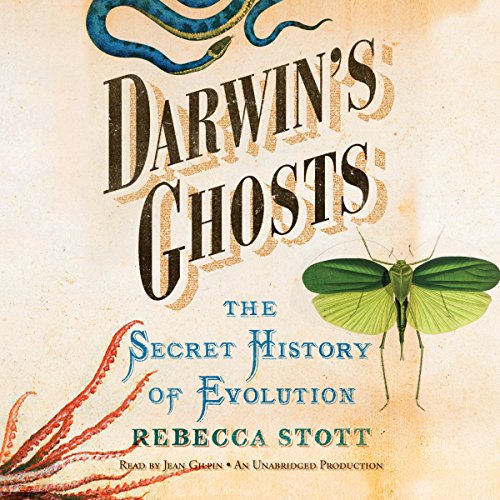 Written by: Rebecca Stott
Narrated by: Jean Gilpin
Try for $0.00

Christmas, 1859. Just one month after the publication of On the Origin of Species, Charles Darwin received an unsettling letter. He had expected criticism; in fact, letters were arriving daily, most expressing outrage and accusations of heresy. But this letter was different. It accused him of failing to acknowledge his predecessors, of taking credit for a theory that had already been discovered by others. Darwin realized that he had made an error in omitting from Origin of Species any mention of his intellectual forebears. Yet when he tried to trace all of the natural philosophers who had laid the groundwork for his theory, he found that history had already forgotten many of them.

Darwin's Ghosts tells the story of the collective discovery of evolution, from Aristotle, walking the shores of Lesbos with his pupils, to Al-Jahiz, an Arab writer in the first century, from Leonardo da Vinci, searching for fossils in the mine shafts of the Tuscan hills, to Denis Diderot in Paris, exploring the origins of species while under the surveillance of the secret police, and the brilliant naturalists of the Jardin de Plantes, finding evidence for evolutionary change in the natural history collections stolen during the Napoleonic wars. Evolution was not discovered single-handedly, Rebecca Stott argues, contrary to what has become standard lore, but is an idea that emerged over many centuries, advanced by daring individuals across the globe who had the imagination to speculate on nature's extraordinary ways, and who had the courage to articulate such speculations at a time when to do so was often considered heresy.

With each chapter focusing on an early evolutionary thinker, Darwin's Ghosts is a fascinating account of a diverse group of individuals who, despite the very real dangers of challenging a system in which everything was presumed to have been created perfectly by God, felt compelled to understand where we came from. Ultimately, Stott demonstrates, ideas - including evolution itself - evolve just as animals and plants do, by intermingling, toppling weaker notions, and developing over stretches of time. Darwin's Ghosts presents a groundbreaking new theory of an idea that has changed our very understanding of who we are.

"Charles Darwin provided the mechanism for the evolution of the exquisite adaptations found in plants and animals, but the awareness that species can change had been growing long before him. With wonderful clarity Rebecca Stott traces how ideas about biological evolution themselves evolved in the minds of great biologists from Aristotle onward. Darwin would have loved this brilliant book - and so do I." (Sir Patrick Bateson, president of the Zoological Society of London)
"Clever, compassionate, and compellingly written, Darwin's Ghosts interweaves history and science to enchanting effect. The evolution of the theory of evolution is a brilliant idea for a book, and Rebecca Stott has realized it wonderfully." (Tom Holland, author of Rubicon: The Triumph and Tragedy of the Roman Republic)
"From Aristotle onward, evolutionists have - thank God - always been a quarrelsome lot, and not much has changed. Rebecca Stott shows how dispute, prejudice, and rage have accompanied their science from the very beginning. Darwin's Ghosts is a gripping history of the history of life and of those who have studied it, with plenty of lessons for today - perhaps for today's biologists most of all." (Steve Jones, author of Darwin's Ghost: The Origin of Species Updated)

What listeners say about Darwin's Ghosts

What would have made Darwin's Ghosts better?

The intellectual history of Evolution of Charles Darwin's forebears is a largely untold story in need of telling. Unfortunately what Rebecca Stott has written is tarnished by her biases and pretentious prose.

This book would have been better served by less pretentious prose, venting of bitter childhood memories, historical revision, and better research into the actual history of Evolutionary thought.

What was most disappointing about Rebecca Stott’s story?

1) In an attempt to make it seem Evolution has a far more ancient history and deeper intellectual roots than what it actually has, Rebecca Stott revises history to include many thinkers who have no contribution to Evolution (Leonardo da Vinci, Al-Jahiz, etc), while excluding many other thinkers, the contemporaries of Darwin, who had actual influence on the development of Evolution. It is far from an accurate history of Evolutionary thought.

2) Stott makes it clear in her preface that she has childhood bone to pick with religion, or rather Christianity, and takes every opportunity to paint religion as a boogeyman (strangely, Islam is treated almost positively on the chapter dealing with Al-Jahiz). Many of the evidence she uses as support is cherry picked and contribute nothing to the topic, while glossing or ignoring the wealth of contradicting evidence. I take no issue with Stott's freedom to express disagreement with religion, but her bitterness comes through from preface through the entirety of the book, distracting from the actual topic. Often it is as if the book is little more than a backdrop for her to vent pent-up childhood anger.

3) She is a overly critical of those who sought recognition for their contributions to Evolution, while forever apologizing for Darwin's obvious failure to recognize his intellectual forbears. In the preface, Powell is portrayed as an envious and bitter man riding on the coattails of Darwin, rather than an intellectual contributor whose work precedes Darwin. Meanwhile, Darwin, who took ~5 years to write the origin, but somehow could not find the time to mention the contributions of others until years later, is given a large list of excuses from poor health to being under too much pressure. Perhaps the most amusing of such excuses is the argument that Darwin simply was not a good historian and thus cannot be blamed for forgetting to recognize the earlier works of others, even though he had created a list of such people before he ever published The Origin.

4) Finally there is the prose. This book often is more historical fiction in line with the bad reenactments one sees on History Channel programs. The book often meanders into lengthy descriptions of the scenery, while replaying fictional descriptions of what Darwin, Aristotle, Al-Jahiz, etc thought, were doing, feeling, etc. Meanwhile the key ideas that each person contributed or didn't contribute is lost and one is left wondering what this has to do with Evolution.

What does Jean Gilpin bring to the story that you wouldn’t experience if you just read the book?

She does an excellent job, no complaints

Other than the subject matter, which is deserving of a good book, no.

What made the experience of listening to Darwin's Ghosts the most enjoyable?

It's an extremely fascinating story. We all know the Darwin narrative, but I didn't know anything about 90% of what's in this wonderful book.

Extremely affected British accent PLUS she turns final "d" into final "t" (I mean, she fairly *spits* those d's), leading to my misunderstanding of several names and terms that had been unfamiliar to me. In fact, believe it or not, this is the sole reason I broke down and bought the Kindle version, so I could figure out what she was saying.

If you could give Darwin's Ghosts a new subtitle, what would it be?

Well, I'm not much of one for glitzy, sexy, cutesy, say-something-so-people-will-buy-the-book titles and/or subtitles. My subtitle for this book would probably just be something like "Darwin's Forerunners" or "Predecessors Who Had Worked Out Most of How Evolution Worked" or some other thing to the point and non-misleading. (Actually, I'd probably choose my first example as the *title,* and my second as the subtitle.) But that's just me, I guess.

The book is WELL worth reading, despite the less-than-ideal narrator.

This book really brings to life the history of evolutionary thought and theory. Another good book is Darwin's Armada

The book did an excellent job of showing the evolution of great thought. It is a portrait of how only free thinking and a rejection of superstition can reveal the true beauty and grandeur of nature. This is a story of people of courage who pursued scientific enquiry, sometimes at the cost of their lives.

Every human should read the chapter on Aristotle.

If you are already familiar with the subject, this book will be a delightful romp through history. it ties together ideas and individuals and shows how memes travel from generation to generation. I could see parts of it dragging if you aren't already a fan of the history of evolution, but I think every human should read the chapter on Aristotle, which describes the birth of empiricism in the most lovely and informative way.

This book not only provides an excellent history of evolution but as well a fascinating perspective on historical facts dating all the way back to Aristotle.
History itself can become so much more interesting when tracking a particular subject through time.
The author has created a historical masterpiece.
The audio version is excellently performed.