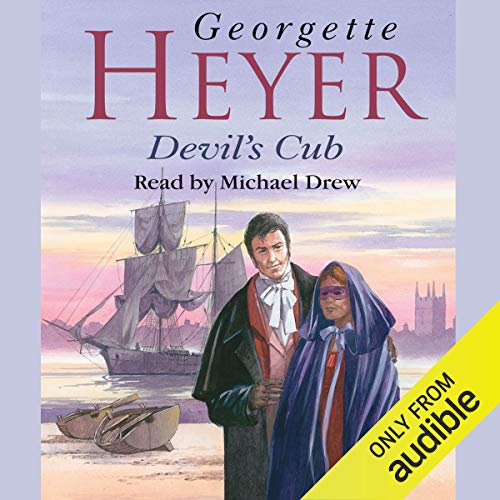 Written by: Georgette Heyer
Narrated by: Michael Drew
Try for $0.00

The excesses of the young Marquis of Vidal are even wilder than his father's before him. Not for nothing is the reckless duellist and gamester called "the Devil's Cub". But when he is forced to leave the country, Mary Challoner discovers his fiendish plan to abduct her sister. Any only by daring to impersonate her can Mary save her sibling from certain ruin.
©2003 Georgette Heyer (P)2014 Audible, Inc.

What listeners say about Devil's Cub

Georgette Heyer was the original Regency romance author. This book was written in 1932 and, when you listen to it, you will know that this is not a 21st century woman plunked down in the late 1700s. Ms. Heyer did a great deal of research on the clothing, vehicles, food, dialogue, manners and language of the time, so her romances are true period pieces.

The dialogue is witty, our heroine spirited, our hero an over-indulged but handsome marquis, and the plot is silly beyond belief and altogether delightful.

I suggest listening to 'These Old Shades' first to find out about the adventures of the marquis' parents.

Note: if you are a strong feminist you either need to compartmentalize, taking into account not only when the book was set but also when it was written (almost 100 years ago) or don't bother reading it. There are some casual lines about women 'of a certain class' that will jar unpleasantly.

The narrator does a terrific job with the different voices and the British and French accents.

Devil's Cub is one of my favorite Heyer books and I anticipated with pleasure the audio version. However, it felt like the narrator didn't grasp the humor, period or characterizations as he should. Humorous comments were misinterpreted and historical insights and characterizations undermined by his rendering. At one point I wondered if he had read the book before recording -- or perhaps the genre just didn't click for him.

Production values were excellent and the narrator is easy to listen to, but the interpretation left a lot to be desired. You can't miss with Heyer and this is a fun book, but it deserved a better narration.

Would you consider the audio edition of Devil's Cub to be better than the print version?

Voices were overly dramatic and don't seem to correspond to the characters. Especially grating is Vidal, who sounds like an old man instead of a 24 year old.

This is a great book that deserves to be re-recorded by a different narrator who truly understands it.

This was a very well done narration of Devil's Cub. I first discovered Georgette Heyer's novels over 20 years ago and have read most of them. This was the first time I had ever listened to one and it was very enjoyable. My two quibbles: 1) The narrator's choice of Vidal's voice (as was noted by a previous reviewer). I thought that the voice he used sounded much too old. More like a world weary man in his 40's or 50's rather than a young man in his 20's.
2) The accent of Mary Challoner's mother was also a bit of a stretch. It seemed too broad and coarse an accent. If Mary's father was a nobleman how could he have possibly married let alone meet a woman so far beneath his social status? But the other charecters were "spot on"!
Well done indeed!

Not as good as "TOS"

Narrator not as good as one for "TOS." Avon sounds petulant, not purring. And Vidal sounds angry, not sinister. But still a good listen.

Like all Georgette Heyer's work, this book is LOTS of fun, but unlike many, it brings up issues that the modern world considers seriously un-funny. Heyer's hero starts the book as somone who drives (horses) too fast and plays too hard, and since he is wealthy & athletic & has a high social position, he gets away with it. Heyer, though, never excuses his behavior. She shows you characters, and their behavior, from their own view-points, and in their own settings. It is up to the reader to decide whether their behavior can be excused (completely, somewhat, or not at all). So, although her hero's behavior, when he assumes that the heroine is a "lightskirt" who (he assumes - incorrectly) is trying to trap him into making her his mistress, is inexcusable by modern standards, it was all too acceptable by the standards of the mid-late 18th century. He does not actually assault the heroine, but not through lack of intent. Heyer does not excuse, and she doesn't, when brought to the point, shy away from telling you a few ugly truths, either.

I enjoyed this book, which is a delightful mix of outright farce and romance novel cliche. It works because Heyer never gets too arch or over-the-top about it, and always plays it straight. My only quibble is with the narration. The reader's own voice is fine, but the vocal characterization he chose for Vidal is distinctly grating - and unfortunately, not in a good way.

#2 in the Allistair trilogy and one of her best

What did you love best about Devil's Cub?

My 14th Heyer (I'm consuming them at a gallop), with an abundance of classic elements, including: adventure, abduction, elopement, two duels(one with pistols, one with swords), a classic rake (actually 2 including the father), a level-headed heroine, humor, and farce. Leonie and the Duke are back, but mostly in the background, as parents. It's the duke's son Dominic now who's the center-stage rake, to be tamed this time by a sensible bourgoise, Mary.Very well-plotted, light, and complete fun!

What other book might you compare Devil's Cub to and why?

All Heyer's books seem to be of a piece, really, despite different plots. They are simply delicious fantasy-romances, and it hardly matters what they're about, though Heyer takes time over the plotting, however light. Our hero Dominic resembles many of her classic nobleman-rakes, including notably his father, Justin, Duke of Avon, Heyer's "uber-rake" of These Old Shades. Once you start reading Heyer it's hard to stop--it's addicting escapism that leaves you feeling quite satisfied and rushing back for more. You're propelled along by the clever dialogue and the interesting period details. For example,I find I now know how to distinguish a curricle from a phaeton from a barouche. Though what good that may do me, I'm sure I don't know. And I am not "queer in my attic!" as her characters are wont to say...

Have you listened to any of Michael Drew’s other performances before? How does this one compare?

I've listened to several other narrators of Heyer's books, and I do think Michael Drew does very well indeed with this unabridged version.--He is actually quite good at capturing a sort of nasty, nasal drawl you might expect of our rakes-both-father and son. He is also very adept in his handling of all the women characters. He has several fine narrative moments; one of the funniest bits is the valet's discourse on the marquis's fashionable figure. Drew clearly milks this little scene for maximum laughs. Simply not to be missed!

Read and listen to as many as you can get your hands on--a healthy way to revive good spirits! I've heard it called mannerpunk; I'd say regency-crack.

Again in this sequel, the narrator has spoiled the hero, Vidal, with a voice which is nasal, sometimes almost whining. None of the charm which is implicit in the character; he sounds unpleasant and repulsive. When Avon appears near then end, thank goodness his voice is not the absolutely awful voice the same narrator used for him in the preceding novel (These Old Shades), but still lacks the charm and depth such a character requires. He does many other characters and voices well, mixes French and English together fluently, and shows considerable skill. But why does he make the heroes of these two novels so thin and unlikable?

One of my favourite Heyer romances this book translates quite well into an audio format. Stars one of Heyer's typical heros - handsome, dangerous, and cynical - with a smart, courageous, ladylike heroine. This is the sequel to 'These Old Shades' and although it stands very well on its own, one needs to read the prequel in order to fully appreciate some of the characters - in particular the characters of Avon and Leonie. The only slight quibble I have concerns the narrator's voicing of some of the male characters. There is a decided lisp given to many of the more dandyish of the male characters which can become a little distracting. It is rather unlikely that all Georgian dandies lisp when they speak so I think this particular style of voicing was a little overdone in this audiobook.

Don't listen to the reviewers!!

I didn't get this book for the longest time because of all the negative reviews about violence, etc. I'm so glad I finally got it! One of my favorites!