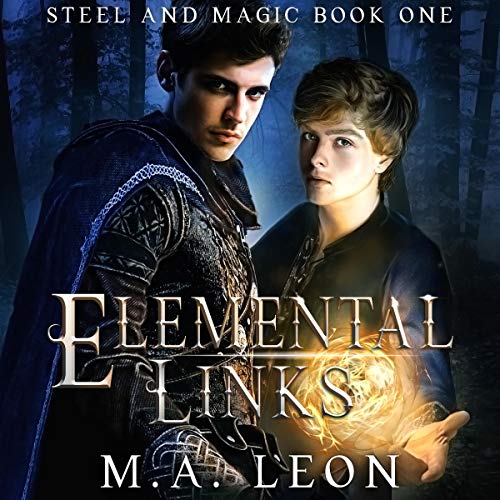 Written by: M. A. Leon
Narrated by: Ryan Haugen

"There are times when Leon’s writing style reminds me of Tolkien. If you’re a fan of medieval fantasy with a full cast of characters, you have to read Elemental Links." (N. N. Light's Book Heaven)

“Take him and run.” The last words of Jake’s mother urged him to save his brother, Louie. Jake and Louie get thrown into the outside world, where Jake learns his skill with a sword can save their lives, and Louie, gifted with elemental magic, soon learns his magic is part of something much bigger: a world of spirits that wage a war of their own.

The necrom are after Louie. They only way the necrom can increase their numbers is to capture and possess more adepts. After centuries of the necrom pillaging, adepts are scarce. The necrom want Louie and won’t stop until they capture him.

Along their way, they meet Cassie; a fiery brunette with more secrets than Jake and Louie signed on for. The boys' unlikely friendship with her turns their run-and-hide strategy on its heels.

Their journey is fraught with unexpected creatures, friends, and new allies. Aside from tournaments and drakons, Jake and Louie are tested as they've never been before. Can they defeat the force that threatens not just Louie, but every adept in Elabrium? Will their allies stand with them against the horde of necrom, whose mere presence threatens not just themselves, but their newfound friends as well?

What listeners say about Elemental Links

I enjoyed this, can't wait for book 2 to be on audible! I recommend this book !

Dad: I read and enjoyed the book. I've been a fan of fantasy my whole life and the story was a pleasure to read. When I saw it was on Audible, I picked it up there as well to broaden its appeal to the rest of the family. The narrator does a great job of bringing the characters and scenes to life.

Daughter (11): This book is really nice. I love how it's fantasy and has adventures and adepts and Cassie, Louie, and Jake. I could not stop playing it on Audible and I loooooved it and the adepts and the different types of spirits. I also think that it should be turned into a movie.

Even better than expected!

I already knew this was a good book, having read it in eBook format, but the narration of this audiobook made it absolutely a pleasure to "read." Haugen brings to life Leon's characters' sassy personalities and witty banter.
It was Amazon reviews of this book that convinced me to try the audiobook and they were right: M. A. Leon does an excellent job developing her characters throughout the book. I'm looking forward to listening to book two when it's released.