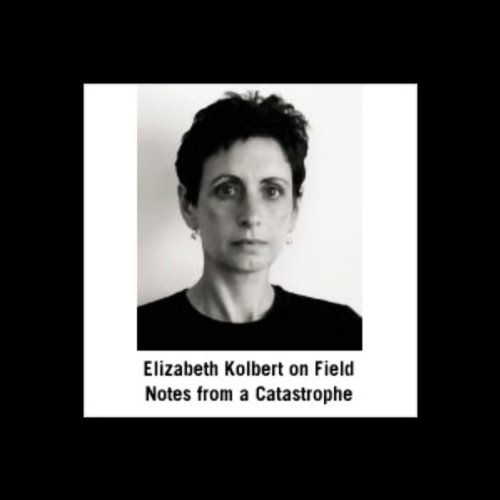 Elizabeth Kolbert on Field Notes from a Catastrophe

Author Elizabeth Kolbert talks about how global warming is not a theory, but a fact. She speaks of the deep concern the scientific community has, and how other countries have begun to take steps to address this growing problem while America lags far behind. Field Notes from a Catastrophe is a compelling audiobook you'll want to listen to and share with others.

About Field Notes from a Catastrophe:
Americans have been warned since the late 1970s that the buildup of carbon dioxide in our atmosphere threatens to melt the polar ice sheets and irreversibly change our climate. With little done since then to alter this dangerous path, the world has reached a critical threshold. By the end of the century, it will likely be hotter than at any point in the last two million years, and the sweeping consequences of this change will determine the future of life on earth for generations to come.

Taking listeners from the melting Alaskan permafrost to storm-torn New Orleans, acclaimed journalist Elizabeth Kolbert approaches this monumental problem from every angle. She interviews researchers and environmentalists, explains the science, draws frightening parallels to lost civilizations, and presents the moving tales of people who are watching their worlds disappear. Growing out of an award-winning three-part series for The New Yorker, Field Notes from a Catastrophe brings the environment into the consciousness of the American people and asks what, if anything, can be done to save our planet.

"Kolbert's calmly persuasive reporting stands out for its sobering clarity....Kolbert lets facts rather than polemics tell the story....This unbiased overview is a model for writing about an urgent environmental crisis." (Publishers Weekly)

Climate is an angry beast

I would raise some issues with Kolbert's over attribution of global warming to various climatic events and regional changes. The increase in global average temperatures due to human produced greenhouse gasses (and other actions like deforestation), is in the order of 0.2C per decade. This will produce changes in the climate outside our standard experience. While the overall trend of weather patterns and changes in regional variations should be detectable over a good chunk of time, the attribution of singular events such as Katrina to global warming is a large stretch. People spreading the call to action should walk the rigid scientific line otherwise you open yourself up to attacks of denial from the various sources of disinformation. So while Kolbert's message may be valid, many of her facts are quite fuzzy. I love the quote "Climate is an angry beast and we are poking it with a stick."

Here is another Chicken Little 'The sky is falling' warning on global warming. This is a hands in the air crying and pleading book on what some (I repeat SOME) self-serving climatologists say is going to happen. 20 years ago 'climatologists’ were warning us of another ice age. Does anyone bring up the FACT that temperature fluctuation is a natural occurrence? Or the FACT that temperatures are about the same as they were 150 years ago? Or the FACT that temperatures are still below the recorded temperatures from 70 years ago? Reactionary knee jerk environmentalists jump from one emergency to another warning us about the next crisis that is going to kill us. What about the ‘hole in the ozone layer? Wasn’t that going to kill us? Did the ban on cfc’s stop it ? Well, when it was shown that they ‘hole ‘ isn’t getting bigger and the reason there is a ‘hole’ to begin with is centripetal force, the chicken little group went to global cooling. That didn't fly. So the next crisis became ‘Global Warming’. (Next in the pipeline is 'Extreme Weather')
Watch the news, the sheep that report the news never say that ‘global warming’ is a theory, it is reported as fact. It is sad that the ‘Global Warming’ band wagon is full. Maybe a little less hot air from these thoughtless-mind nummbed robots will move us on to the next crisis.