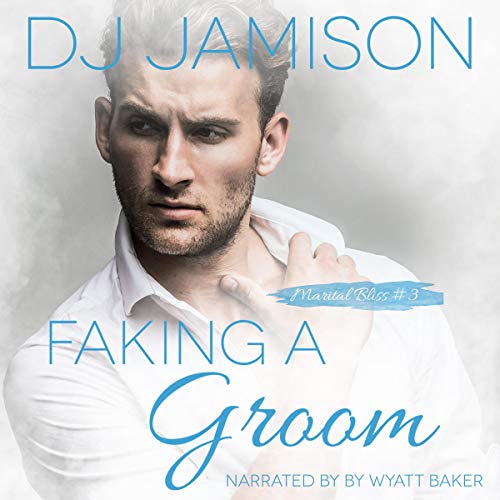 Written by: DJ Jamison
Narrated by: Wyatt Baker
Try for $0.00

Can two men fake an engagement for the greater good?

Avery Kinkaid has been bowing to his father's will far too long. But when his dad supports anti-LGBTQ legislation, he's had enough. Sen. Kinkaid says things would be different if Avery had a fiancé in the wings. Well, fine: He'll just have to get one.

Rory Fisher is an activist with a heart of gold and nerves of steel. He's not afraid to call Avery on his BS, and that's why Avery knows Rory is the perfect fake fiancé to help him take a stand. If he still feels a little too much for his ex, well, he can shove that down and suck it up to beat his dad at his own game.

Until Rory encourages his most hidden desires. Until he makes Avery feel stronger, braver, and freer than he's ever been.

Loving Rory is easy, but Avery's father won't just sit back and let them have their happily ever after. They will have to fight: for their love, for justice, for a future together.

This is one power struggle they can't afford to lose.

What listeners say about Faking a Groom

A sweet second chances, opposites attract romance.
I adored how Avery and Rory's relationship grew and progressed.
The characters were relatable, likeable and well fleshed out.
I enjoyed every minute of listening to this book.
Wyatt Baker has performed quite an exceptional audio delivery on this one.

I am voluntarily reviewing an ARC of the audiobook.

Pros: watching Avery grow in confidence and stand up to his father, Rory's kindness (and his family's kindness).

Avery's desire to wear makeup and pretty clothes clashes with his (father's) idea of what is manly and it's lovely to see how this changes over time. Also, often characters that wear makeup or lacy/flowery clothes are depicted as smaller in build, with finer features so it is refreshing to have a character with a "Jock" build expressing these desires. Diversity rules.

Cons: The "father as villain" trope felt uncomfortably similar to book 1 in this series.

The situation between Avery and his father is well written, you believe that Avery wants to give his Dad all the chances and the Dad character is the right side of the villain scale (not too overdone, not too cartoony). The political father forcing his son to stay in the closet bit has just been done a lot and I'm not sure anything new is achieved with Faking a Groom.


The audio is clear and read in a traditional narrative style; the narrators voice fit the characters. There isn't a lot of differentiation between the character voices though, which was a negative for me.

OMG! I loved every second of this book! A villain, a fake engagement and learning to love...it has it all! And then the laughs! so much fun!

Back to the series with frills

I liked that this third book in the series came back around to the same geography and sensibility. Love both characters, especially the jock who wanted to find an outlet for his desire for frills. The way he is torn about what he wants and how he hates himself for wanting it read very authentic. I also enjoyed the activist Rory and his extended family. When his stepfather shared that a family member likely killed himself while struggling with being transgender and black, that was hard and real. We lose too many people every year to violence against our trans brothers and sisters, and that is exponential among communities of color. Off my soapbox and back to the novel, I loved how the two men made each other stronger and better. The evil father is back from book one, only the name and profession have been changed. Other than that, very worth the listen.

Thoroughly enjoyed this new audio book from DJ Jamison! I liked the ebook version but Wyatt Baker brought this story to life for me! Great job!

One of the best fake engagement stories ever!

Fake engagements are one of my favorite tropes and I thoroughly enjoyed this audiobook. The story was so engaging, right from the start and I easily connected with the characters. This is the third book in the series. It was the first that I read, and I didn’t feel like I was floundering at all with not reading the other ones first (although I’m going to immediately rectify that and catch up with the first and second books).

My heart went out to Avery. I’m a sucker for a broken character and Avery is so beautifully written. He’s a character that I think many of us can identify with in our own way, hiding the true parts of himself in order to make other people more comfortable. He’s been groomed for a life in politics and follows his father’s lead even when it isn’t his heart’s desire... until he once again crosses paths with Rory and has to confront the past they shared in secret.

Rory is one of those guys that you just want to know and be friends with because you know they won’t let you down. I was rooting for these two from the start. And let me tell you, I wasn’t sure how they were ever going to get their HEA.

DJ Jamison did a fantastic job of keeping up the suspense. I’ve only read one other book by this author but I’m a solid fan now and it won’t be my last. Their writing style is effortless to read and perfectly descriptive. I felt like a part of the story instead of someone looking at it from the outside.

I want to take a minute to mention Wyatt Baker, who is a new to me narrator. I think he might be one of the best narrators I’ve ever listened to. He did a brilliant job with these characters and I can't wait to listen to him again.

A beautiful story about learning to love oneself

Avery is a man coerced into staying in the closet by his manipulative father. Rory is his first love... with Rory’s support Avery finds his true self and learns that it’s truly ok to be himself. I loved this book and Wyatt Baker did a wonderful job with the narration. 5 stars!

This is a great second chance romance with a wonderful fake engagement. Avery needs a fiance to fight against his father so he turns to Rory, his high school ex. I really enjoyed watching them rebuild their relationship as their fake relationship turns to real feelings. It was great to see Avery's self confidence grow throughout the story. The narrator did a great job with the story and with all of the character voices. I'm looking forward to the next one in this series. I voluntarily reviewed a gifted copy of this audio book.

Fairly good story. The narration is pretty typical for an audiobook.
Glad everything ended happily. It was nice to see some cameo appearances from Caleb and Julien.
I recommend if you’ve read and liked the other books in the series or are curious about this one.

I received a free copy of this audiobook from the author via Neon Rainbow ARC reviews and am voluntarily leaving a review.

Fake relationship with a dash of politics

Wyatt Baker is a new-to-me narrator, and it usually takes a few books for me to get accustomed to a voice. At times it was difficult to distinguish which MC was speaking as both characters were voiced the same. For me, it's easier to follow along with a story when a narrator uses a different tone or inflection for each main character. Having said that, the narration was more than acceptable. Baker's performance was enjoyable and I would listen to another of book narrated by him.

As for the story, one of my favorite tropes--fake relationship--is the main plot point and is what drew me to this book. Though the writing felt repetitive at times, I thoroughly enjoyed Avery and Rory and the evolution of their relationship. It was sweet how they reconnected years after their high school fling. Avery's dad was an excellent villain. Other minor characters were fleshed out and complimented Avery and Rory's story. I especially loved Rory's family.

Although part of a series, I didn't feel lost at any point during this story. Faking the Groom can absolutely be read as a stand-alone.

In all, I'd recommended this book for anyone who loves fake relationships, found family, and second chances.