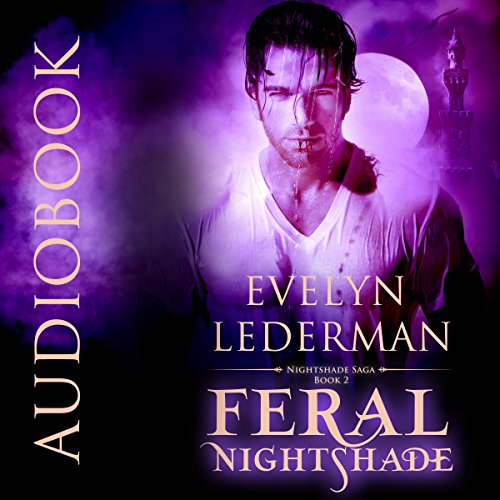 Written by: Evelyn Lederman
Narrated by: David Brenin
Try for $0.00

Devastated by her mother's death, Emma Thorton inked her body with protection and eternity tattoos. Years later, after being pulled through a portal into the Nightshade universe, these markings brought her to the attention of a powerful and deadly vampire. Her only hope is to turn to another vampire who she is unexplainably drawn to.

Frazour lived by the sword when he was mortal and it was the reason he was converted to a vampire. He lived to kill his adversary and shied away from vampires and humans alike. Frazour is finally about to meet the enemy for a final battle when his focus is distracted by a woman he senses is his mate.

Although Emma was claimed by another vampire, Frazour will sacrifice his life to be with her. Their only hope is that they are true soul mates and will gain the powers to overcome the dangers inherent in the Nightshade universe.

What listeners say about Feral Nightshade


Feral Nightshade is a captivating story from the dark, and dangerous universe know as Nightshade which sucked me in, and held my attention. It picks up where book one leaves off, introduces new and interesting characters, has an intriguing plot that's full of betrayal, romance, and lots of twists, and turns.

Emma, who was captured and brought to the Nightshade universe, has suffered at the hands of the vampires; however, she cannot deny the attraction she feels towards Frazour, a vampire. Frazour never believed in Soul Mate's until he met Emma, but after meeting her, he knows she is his Soul Mate. As they spend time together, their attraction for each other grows, and Emma's character transitioned into something better as she merges and comes into her powers with her element. She goes from a frail human to a very powerful force!

David Brenin is an AWESOME narrator! He's got a great voice, and narrates with such a passion! You can clearly hear the passion in each story, and can't help but to be swept away!

Overall, a really good story that has a great balance between dark and dangerous moments, and steamy romantic scenes.

have loved both the first and second book..

I loved both the first and second book in this series. the stories are full of romance, action and generally a great story.
the narrator is fantastic and is one of the few male narrators who doesn't make the female characters sound all whiney and high pitched

Love this series! Need books 3-5 on Audible, too.

Thoroughly enjoyed books 1 and 2 of this 5 book series. Love Ms Lederman's story telling talents. But, now need more of her books on Audible.

I found this audio book while looking for other books done by David Brenin and I'm glad I did. I love his narration style.

Kudos to both author and narrator!

The Power of Tattoo's

Another well written story from the Nightshade universe
Just as good as the first book, if not better.

There is no starting off slow here, you are immediately pulled back into the twisted, dark and dangerous Nightshade world again. This is the story of Frazour (great name) and Emma. Emma has escaped from the Bertram vampire hive and sought refuge in Lorenz's keep. After not believing in a soulmate Frazour's mind is immediately changed the moment he see's Emma. As soulmates they will gain new powers/abilities that will aid them in the dangerous world they live in. Enemies old and new plot against them, only together will they have the power to defeat them.

David Brenin did another really good job with the narration. Male and female character voices both were great. He Conveys the emotions of each character. He is the perfect voice for this series.

This Audiobook was provided by the author, narrator or publisher at no cost in exchange for an unbiased review.

Where does Feral Nightshade rank among all the audiobooks you’ve listened to so far?

On a scale of 1-10, I would say an 8, only because "otherworld" is not my favorite genre. I enjoyed this 2nd book better than the first because I understand the story line better, even though both were well written.

What was one of the most memorable moments of Feral Nightshade?

Probably near the end when Emma was betrayed and stabbed. I was very upset because I forgot that Emma was now an immortal

What does David Brenin bring to the story that you wouldn’t experience if you just read the book?

I love movies and books so when I listen to an audio book, the narrator, if good, brings the book to my mind like a movie does. David did a great performance, he has a extraordinary voice.

Would be interested in the next books, I assume there will be stories of the other brothers.