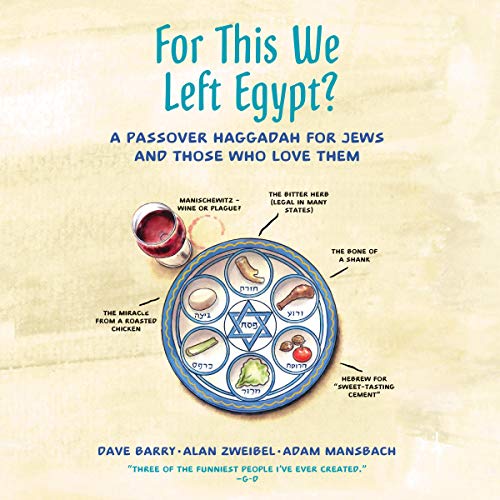 For This We Left Egypt?

If you've ever suffered through a Passover Seder, you're well aware of the fact that the entire evening can feel like we're still in bondage. There are endless stories, frequent hand washing, and not enough eating. The book you hold before you is no ordinary Haggadah. For This We Left Egypt? is a hilarious and entertaining parody from the comedic minds of Dave Barry, Alan Zweibel, and Adam Mansbach. These award-winning comedy writers take you through every step of the Seder, from getting rid of all the chametz in your house by setting it on fire with a standard blowtorch (preferably outdoors), to breaking the middle matzah - that is, if you can find a piece that isn't already broken, to a hilariously absurd retelling of the Passover story featuring Pharaoh Schmuck, a burning bush that sounds kind of like Morgan Freeman, and the Promised Land which turned out not to be a land of milk and honey but rather one of rocks and venomous scorpions the size of Yorkshire terriers. Also included are useless commentary and thought-provoking discussion questions throughout such as: Is Manischewitz considered a plague? Publishing just in time for Passover, this book will be the perfect gift book from G-d that you'll want to share and laugh over with friends and family.

What listeners say about For This We Left Egypt?

While the book is narrated well, and genuinely funny at some points, I would not recommend this book to someone who is new to leading a passover seder. There are jokes that are presented in the context of real information, and if one is already well versed in the exodus story, and the symbols and rituals of the seder the jokes are funny. If one is new to leading a seder, one will likely mistake a significant handful of the jokes in this book for real information.

Their performances are as brilliant as their insights. Among the authors is at least one national treasure. I'm looking at you Alan Zweibel!

Now this explains it!

This was truly a breath of life for the Hagada I spent 2 nights a year with for over 50 years. I actually understand some of it. Thanks.