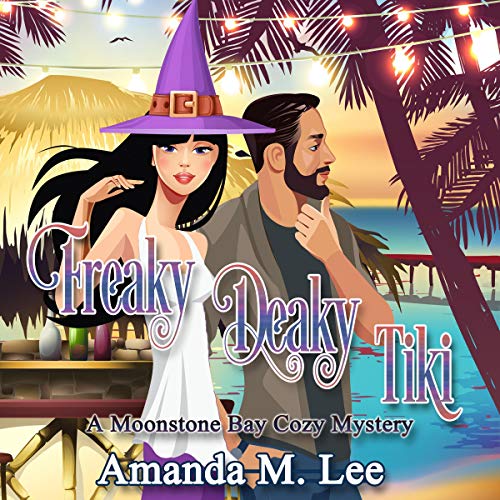 Hadley Hunter is learning about life, love...and being a witch. She has a hot and hunky boyfriend, new friends, and family she didn’t know existed until recently. Her plate is full. Life gets even busier when a Detroit grim reaper named Aisling Grimlock hits Moonstone Bay for her honeymoon.

Aisling is loud, brash...and pregnant. Unfortunately, she’s not one of those women who gets happy and develops a glow at the notion of a new baby. When a body turns up on the docks, Hadley decides to help her boyfriend Galen investigate. All she knows for certain is that the murder looks ritual thanks to the tiki mask left behind...and the gaping wound in his chest.

Since she’s bored and limited, Aisling latches on to Hadley and volunteers to help. That means zipping around the island and investigating the local cult that lives in the forest. Aisling has specific ideas about what should be done. Hadley has her own ideas. And Galen wants them both to steer clear of his investigation.

Things are bound to collide...and they do in spectacular fashion.

What happens when Detroit’s mouthiest reaper and Moonstone Bay’s newest witch collide? You’re about to find out.

The stakes are high, death is in the air...and a few more secrets are about to be unveiled. Strap in, because things are about to get freaky.

GET A DIFFERENT NARRATOR!!!

This narrator is horrible!!!! If I could have given the performance zero, heck negative stars, I would have, but you have to give at least one. I cannot stress this enough. It’s absolute torture to have to listen to her. It’s like listening to a sarcastic 8 year old for hours on end. She has no idea how to speak naturally. She doesn’t know where to put inflection in a sentence, so she just stresses random words! ABSOLUTE TORTURE!!!!
The story is great, otherwise I would have asked for my money back.
PLEASE PLEASE PLEASE GET A DIFFERENT NARRATOR!

The story may be good, but reader is awful

When I read Amanda M. Lee's books on the Kindle they are wonderful, but the reader Angel Clark makes them childish and painful listen to. Completely ruins a "possibly" good story with horrible narration.

Just say no to anything narrated by Angel Clark and save your money.

A good story so easily ruined...

Amanda M. Lee is one of my favorite authors. Her writing style is kind of simple but her stories and characters are fun. However, it is so sad that, once again, the fun is ruined by the narrator.

Angel Clark is certainly a prolific narrator, but that doesn't make her a good one. She continually emphasizes the wrong words and disrupts the flow of the narrative. When I have to keep stopping to repeat a phrase or sentence in my mind in order for it to make sense, it really pulls me out of the story for a moment. Also, her pronunciations are sometimes very off and her characterizations are weird and offputting. She makes no effort to try to bring voice qualities already set up by narrators of the stories the characters are drawn from in series crossovers. In this story, the way she does Jerry and Corwin are especially distressing.

Honestly, after listening to her narration of "Witch Out of Water", I had decided to forgo this particular series. I only bought this one because it touched on the arc of the Grimlock family stories. I had to listen to it at a very fast speed (for me) to get through it.

I have complained before but was unheard.This time, it is my hope that someone with the power to change things is reading this review and does something to replace Ms. Clark before she strikes again. If so, I might give Moonstone Bay another chance.

love the intermixing of the Grimlock newlyweds=)

the only thing i didn't like is that, after listening to all the previous Grimlock books, Karen Krause is Aisling, and it's hard to get that out of your head. other than that, 💗

I love angel Clark’s narration for the snarky female characters. She does a great job with the male characters too. The stories are fluffy romance with murder to boot, classic mindless chic-lit, which i consume like an addict. I have a stressful depressing scientific job and need a refreshing reliably pleasant escape in my audiobooks!!!

I have read these books previously and I love listening to them also. Hadley is growing in her magic and it is fun to experience.

Read or listen to the Grimlock series first.

Read or listen to the Grimlock series first. This book has spoilers for that series.

Now I have definitely fallen for this series. This book is 10/10. I liked the first two but loved this one! Aisling Grimlock is my favorite Amanda M Lee character.

I was not aware when I started this book that it was a cross-over with her Aisling Grimlock series. if you are not up to date on that series or intend to listen to it then this will tell you too many facts That give away things in the series. Also, if you are an Aisling fan, it's odd hearing the perception of her through Hadley's eyes.

I have to say this book was the funniest. So in part to the two new friends that were made.