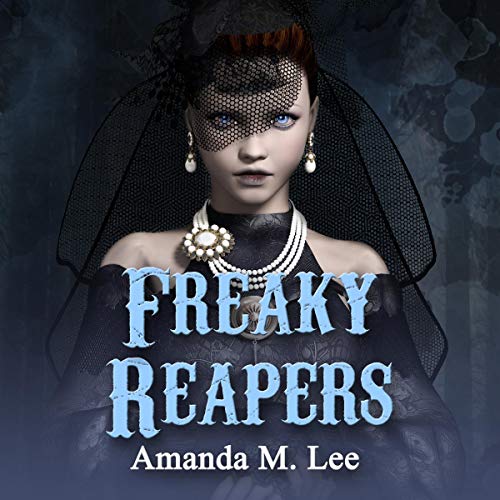 Poet Parker put the past behind her. At least she thought she did.

Life on the streets wasn’t what she had in mind for her forever, and she jumped at the chance of joining Mystic Caravan Circus when an invitation was extended. She didn’t look back.

That was 10 years ago, and now Poet is going back to the exact area she used to haunt, and she’s nervous. The friends she left behind are scattered. Some are dead. Some have moved on to other things. Some turned out to be something else entirely. Others simply disappeared into the wind.

Unfortunately for Parker, forgetting isn’t easy...especially when a group of banshees start infringing on Mystic Caravan’s territory, and the creatures seemingly have ties to the people Poet left behind.

Between the reapers also working on the case, a crazy family called the Grimlocks who can’t stay out of trouble, and the guilt weighing Poet down given the way she fled, she has her hands full.

Someone is controlling the banshees, stealing girls from the streets, and creating a merry band of monsters. It’s up to Poet to find out who its is and protect two street girls who remind her of herself.

Poet doesn’t want to look back but she has no choice...what she finds might be more evil than she ever imagined.

What listeners say about Freaky Reapers

the Grimlock's are my absolute Favourite AML family, so any crossover featuring Them makes my day! they're a great addition to the Mystic Caravan family, as well!
loved it!!
💗💗💗

I love how the author is pulling in other characters from her different series'. It's so much fun seeing all these characters get together.

As if Poet, Cade, Luke, Raven and the rest of the gang weren’t enough ... add in the Grimlocks and Izzy!! This book was so fun to listen to.

I had no doubt I would love this book. I love Amanda M. Lee and all her books. Poet and Aisling are two of my favorite characters and it was awesome having them together. This book is just as great as all the rest. Caitlin Kelly did a great job with narration as always.

I do love the Mystic caravan series. However I've said this before not one person wrote all the series in lee/heart books/ series and it shows. This book was not as good as the first 4. Poet was very whiny and kade he was just PW. The sassy snark were gone from the characters. Not a fan of this book. Hope it changes back or I won't be getting any more of this series. Really hope Avery Shaw hasn't taken a about face I really like that one. The narration was just meh did not like how some of the voices were done at all and I won't be getting any more audio I'll just read it if I decide to continue this series. Sorry but I feel being truthfull is best. Read/listen at your own risk.

A Detroit reunion - Grimlocks and Izzy are here

I got so tired of the homeless spiel in this story. It is always mentioned about Poet in the other novels. Now since Poet is on her home turf, it was reiterated ceaselessly. Everyone especially Kade and Luke bemoaned the fact that she was homeless, had hungry days and cold nights. Ok we got the message it did not have to be repeated as often.

Poet’s actions were motivated by her guilt of getting off the streets while others did not. She hits the town like a hailstorm and is determined to solve a murder that has no connection to the circus. It is inferred that the girls are homeless, which is enough for Poet to become involved.

Even though she lived on the streets, twelve years ago, and knew the neighborhood at that time that makes no reason for her hubris in her skills now. What should have been her take away was when you go into a bad neighborhood always go with a buddy. As in the other novels, her and Kade do there thing about Poet going off alone. To give credit, Kade did show a little understanding. But points were deducted with the annoying way Poet and Kade were keeping track of who is ahead in telling the other I love you. Grow up guys.

She comes back 12 years later and wants to hold people accountable for what happen at that time. Her conceit that she can vouch for the integrity of people that lived or still living on the streets 12 years later is astoundingly arrogant.

Her suspicions at the Grimlocks pissed me off. Does she think that Mystic Circus is the only organization that fights paranormal evil? It was a unique touch that Amanda Lee, the author, bring in all her Detroit characters, the Grimlocks and Izzy from Death Gate Grim Reapers series. She gives us an opportunity to keep up with the Grimlock family. Poet did not win points from me for reading baby Lily Grimlock’s mind. The nerve to tell them that Lily is manipulating her parents.

I could not get past the guilt being passed around about poor homeless Poet, the enviousness others had for her leaving or the need for Poet to interfere in others life. This was mostly a pity party for poor Poet and an opportunity to help those she left behind. That is why I gave the story ok.

To many of the male voices sounded the same. That is why I did not rate that higher.

I was so excited for this crossover, and it didn't disappoint!
We go back to Poet's "home town" in this book, and get to learn more about her. I loved getting some more background info.
lots of big personalities in this book, and I thought they were blended perfectly.
The narrator did an excellent job bringing the story to life.

Loved this addition to series. It's always good to catch up in the Grimlocks andntheir brand of crazy. Poet heads back to Detroit, to the area she used to call home while on the streets. she struggles with her decisions back then, though she didn't have a choice. The while circus is super supportive. Banshees on the loose and memories to fight. Poet is pit to task in this one.

It is always fun to spend time with the Grimlocks but this book gave us so much more. Lots of closure for Poet and setting up a new character that I am guessing we will. e seeing soon in one of Amanda's new series A must read.

This book was GREAT! I love when this author combines characters from my favorite series!!