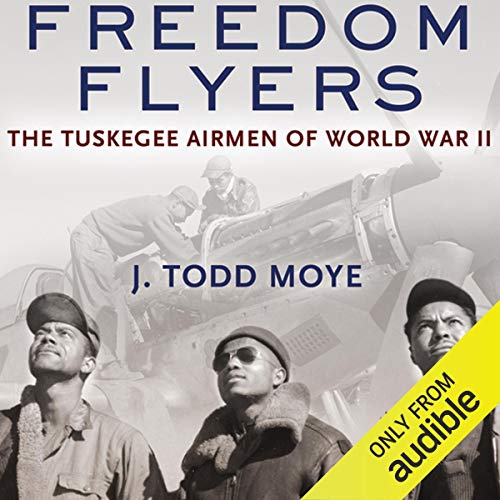 In this inspiring account of the Tuskegee Airmen - the country's first African American military pilots - historian J. Todd Moye captures the challenges and triumphs of these brave aviators in their own words, drawing on more than 800 interviews recorded for the National Park Service's Tuskegee Airmen Oral History Project.

Denied the right to fully participate in the U.S. war effort alongside whites at the beginning of World War II, African Americans - spurred on by black newspapers and civil rights organizations such as the NAACP - compelled the prestigious Army Air Corps to open its training programs to black pilots, despite the objections of its top generals. Thousands of young men came from every part of the country to Tuskegee, Alabama, in the heart of the segregated South, to enter the program, which expanded in 1943 to train multi-engine bomber pilots in addition to fighter pilots. By the end of the war, Tuskegee Airfield had become a small city populated by black mechanics, parachute packers, doctors, and nurses. Together, they helped prove that racial segregation of the fighting forces was so inefficient as to be counterproductive to the nation's defense.

Freedom Flyers brings to life the legacy of a determined, visionary cadre of African American airmen who proved their capabilities and patriotism beyond question, transformed the armed forces - formerly the nation's most racially polarized institution - and jump-started the modern struggle for racial equality.

What listeners say about Freedom Flyers

PICK ANY OF THE FIRST THREE CHAPTERS and it will put you to sleep. I was looking good for a book along the lines on the movie RED TAILS, this was far from it. Very boring

Once you get past all the dry facts and dates you have a rich narrative of perseverance, grit and courage. The story of how black men in America fought for the right to fight in the air is only half of this fascinating and entertaining book. Well worth the listen, chances are you will learn something new.

Not much for action stories but a good history lesson. The book focuses mainly on the build up to, and aftermath of, the combat.

I loved the topic and the historical accounts, but I had a hard time finishing. After a certain point, it jumped around too much. Maybe on paper the story and topic switching was easier to follow. I think there should've been a break in the narration when topics changed, or focus changed.

The efforts and accomplishments of these courageous pilots and ground crews, before, during, and after WWII, represent one of the finest moments in US history. Every American needs to know their story. This superbly researched and written book beautifully delivers that story—and the audio version was very well done. (I also highly recommend a visit to Moton Field at Tuskegee. The Tuskegee Airmen National Historic Site is fascinating.)

If you could sum up Freedom Flyers in three words, what would they be?

The storyline follows pre-war through post war events, incredible but true events. Not as much of the exploits of the flyers during the war, very little compare to the rest of the book. The only bad part is the reading, is dry and monotonic. Could have been a lot better.

too much politics and not enough flying

What would have made Freedom Flyers better?

What could J. Todd Moye have done to make this a more enjoyable book for you?

If you could play editor, what scene or scenes would you have cut from Freedom Flyers?