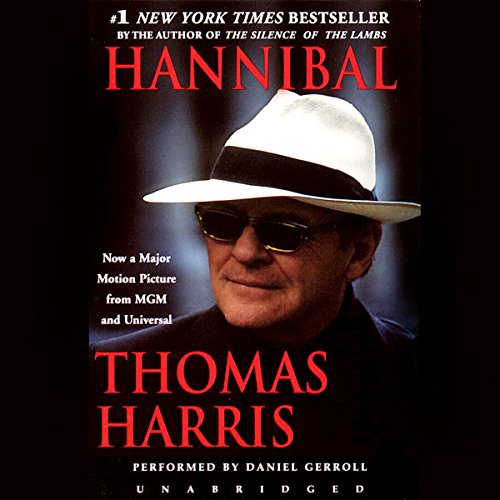 Written by: Thomas Harris
Narrated by: Daniel Gerroll
Try for $0.00

Invite Hannibal Lecter into the palace of your mind and be invited into his mind palace in turn. Note the similarities in yours and his, the high vaulted chambers of your dreams, the shadowed halls, the locked storerooms where you dare not go, the scrap of half-forgotten music, the muffled cries from behind a wall.

In one of the most eagerly anticipated literary events of the decade, Thomas Harris takes us once again into the mind of a killer, crafting a chilling portrait of insidiously evolving evil - a tour de force of psychological suspense. Seven years have passed since Dr. Hannibal Lecter escaped from custody, seven years since FBI Special Agent Clarice Starling interviewed him in a maximum security hospital for the criminally insane. The doctor is still at large, pursuing his own ineffable interests, savoring the scents, the essences of an unguarded world. But Starling has never forgotten her encounters with Dr. Lecter, and the metallic rasp of his seldom-used voice still sounds in her dreams. Mason Verger remembers Dr. Lecter, too, and is obsessed with revenge. He was Dr. Lecter's sixth victim, and he has survived to rule his own butcher's empire. From his respirator, Verger monitors every twitch in his worldwide web. Soon he sees that to draw the doctor, he must have the most exquisite and innocent-appearing bait; he must have what Dr. Lecter likes best. Powerful, hypnotic, utterly original, Hannibal is a dazzling feast for the imagination. Prepare to travel to hell and beyond as a master storyteller permanently alters the world you thought you knew.

"Strap yourself in for one heck of a ride - it'll scare your socks off." ( Denver Post)
"Relentless - endlessly terrifying." ( Los Angeles Times)
"Interested in getting the hell scared out of you? Buy this book on a Friday...lock all doors and windows. And by Monday, you might just be able to sleep without a night-light." ( Newsday)

What listeners say about Hannibal

Best performance out of all the Hannibal books

Fantastic narration by Daniel Gerroll. The accents, varying tonality and inflections of the characters were convincing and immersed my listening. I could easily have listened to the whole book in one sitting. Truly a captivating and attentive performance that elavated the storyline.

As a treat for myself I finished Tomas Harris's, Hannibal. Of all the Lecter books this one is the most different from the movie adaptation. It also is the most enjoyable.

In this book there is a lot more attention to detail behind the charter of Hannibal Lecter. There was also a lot of references to all 3 of the previous books and Dante's Divine Comedy and Alexandre Dumas writings. Which for me was a nice gravy on the lamb.😉😉

Harris also brought back a charter form, The Silence Of the Lamb, Barney. Who once again his role was very different for the movie adaptation.

There are so many great moments in this book that never made it on screen. I am sure that if you are a fan of the series you will eat them as I did. 😉

The only drawback, for me, was Daniel Gerrolls weather mondain performance. It felt like he was not trying to emulate different characters. Other than a loose attempt on accents it was read as one person. Not a person performing many charters.

The best part of this book was the ending. Which completely differs from the movie adaptation. One that I fully recommend you find out for yourself. I hope it sachets your appetite. 😉😉😉

As ever and always I want to thank everyone involved in the creation, publication, production, distribution, and supporting both the written and audiobook format. Fill the world with good stories.


P.S
Disclaimer
I am not an author of any book that I review. I have no affiliation with any organization responsible for the production and the distribution of any book I review. I am not a promoter in any way.

I am Dyslexic a disability that makes the enjoyment of reading and writing taxing. However I do believe in facing your challenges. Thus I mainly listen to Audiobooks as I work. My review's are me exercising my comprehension of the book I just listened to. In putting my thoughts in words I am attempting to better myself.

My reviews are not meant to offend. I realise that everyone has their own opinions. I will not get into dog fights over my statement.

Understand and expect spelling errors, poor grammar, and I may sometimes misuse a phrase. Pointing my mistakes can be educational. I only ask you do it with kindness.

The narration was amazing!

I knew that the book was going to be great but wow! That narrator was amazing. He got into it and was acting!

Everything about the Hannibal Lechter series fascinates me. Not to mention that I'm a huge fan of Anthony Hopkins...

I am always inspired reviewing any aspect of this work. However this was really the most unexpected ending.

Hannibal ranks as one of my favorite books. It is fascinating how Thomas Harris successfully created an admirable villain, but in a weird ironic way, Hannibal makes the world a better, because he only attacks/eats those who are vile. I think there is a quote in the book where Barney (former orderly in Silence of the Lambs) says, "Dr. Lecter said he only ate 'the free-range rude.'"

Mason Verger is one of Hannibal's earlier victims who wants revenge, and he will stop at nothing to repay Dr. Lecter with a similar fate as his.

As I listened to the book, I didn't know who was the sickest: Verger; Dr. Lecter; Harris for creating these characters; or me for enjoying them.

What I particularly enjoyed about the book was how brilliant Lecter was; from his knowledge of Medieval literature, to his nearly perfect Italian, to his quick wit, to Hannibal's memory palace.

I loved the book; however, since I have listened to the unabridged version of the book numerous times, I was dissappointed to discover that this book really lies somewhere in that Purgatory between abridged and unabridged: certain quotes and lines were left out and the book abruptly ends with about 25 pages left. These 25 pages are crucial, because they demonstrate the consequence of greed, which is a major theme in the book. Despite the lack of quality control from Audible on this one, I still gave it a 4-stars out of 5. It is definitely worth listening to, and who knows? by the time new listeners download the book, this problem may be corrected. If not, go to the local library and check out the book and read the final 25 pages, because it is definitely worth the time. Sorry!

I really wanted to listen to this book but had to return it because of the narrator! First of all he spoke too fast and then when the victim was speaking his words were SO slurred that I could Not understand ANY of it!! Guess I have to READ it!!

Excellent story but not unabridged

This is one of my favorite books. Hannibal Lecter is one of the classiest characters I've run across. This book takes you into the parts of his mind that make him brilliant. The book is not all about him but it is great reading. This is not a horror book. Silence of the Lambs was much more visually disturbing. This is more of a Suspense book. It can also be read independently of the others.

It says that this is an unabridged book but it is not. It is missing the last few chapters and in my opinion, the most important ones. They just ended a chapter and spiced in "This... is Audible". Either the recording needs to be revisited so that it can be presented in it's entirety or it should be marked "Abridged".

All that being said, this is an excellent book and I found excuses to spend extra time with it.

It’s been updated, it’s all there!

I was initially turned away from this because of previous reviews that said it was missing the last 25 pages, ITS NOT, I checked the book and everything! Great performance, and one hell of an ending!

Taken by itself, Hannibal is an intriguing, if somewhat unrealistic crime thriller. Compared to its predecessors, though, it is underwhelming and odd. It is not as carefully plotted or grounded as the previous books, and Dr. Lecter is nearly superhuman. I have always enjoyed Harris' realism and journalistic style, but these are lacking in this novel.

Gerroll's narration takes some getting used to. He is competent, but often reads too quickly. Some of his character voices are irritating (esp. his Barney) and his Mason Verger is nearly impossible to understand (Verger has severe vocal impediments, and Gerroll imitates them exactly).

I wish Frank Muller could have read this book. His narration of "The Silence of the Lambs" was flawless. His Lecter is particularly chilling and rivals Anthony Hopkins Oscar-winning performance.

I could barely understand Mason Verger. I know he was severely disformed but the narrative for his lines could have been clearer. I only finished the book because I love the written book so much.

Would you try another book from Thomas Harris and/or Daniel Gerroll?

Yes, I look forward to Hannibal Rising. I don't think I could stand another Daniel Garroll narration unless the book is slapstick comedy.

The narrator creates absurd caricatures of the various characters, especially Mason Verger. The Mason and Barney voices are ridiculously overdone and Barney sounds like Woodhouse from Archer and I absolutely hated it. He should have pulled back on the Verger character, it was annoyingly absurd. I get the missing lips but but Gary Oldman really found the right balance in limited speech and getting the communication across.

You're better off reading it

I understand that there are reasons for the book to be read as it was-I agree with other reviews-I could not understand Mason Verger at all in the reading-making me miss entire chapters of the storyline. I also understand that a great part of the plot takes place in Italy-but it's very hard to listen to Italian and not understand a word of it-I'd be much better reading it in text so I can recognize locations or go back if I needed to. I can't even review the storyline or book because the narration is so hard to understand. I got half way through and don't even know what's happening.

As I write this in December 2016, I find that some of the older reviews are unfair. This unabridged recording is the complete book. Nothing is lacking. Also the narrator is totally understandable throughout. I suspect previous listeners were listening at accelerated speeds, and the distinct voice of lipless Mason Verger would then be difficult, but not at all impossible, to understand. Have no fear purchasing this book. It is great!