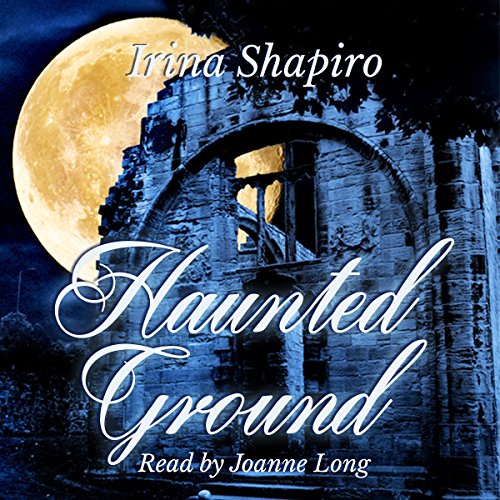 Written by: Irina Shapiro
Narrated by: Joanne Long
Try for $0.00

When American Lexi Maxwell buys a derelict mansion in a quaint English village and sets about turning it into a manor-house hotel, it’s a dream come true. But events take a turn for the bizarre, as a heartbroken ghost makes a nightly appearance and kneels beneath a tree next to a centuries-old ruin, and people in the village keep commenting on Lexi’s resemblance to a woman who’s been dead for a quarter of a century.

As Lexi tries to find out more about the man in the ruin, she unexpectedly stumbles upon secrets from her own past - secrets that threaten to destroy everything she’s come to believe and hold dear. As Lexi struggles to put the pieces of the puzzle together, she’s drawn deeper into the mystery and can only rely on the man she’s come to have deep feelings for - a man who’s battling his own demons.

What listeners say about Haunted Ground

This Narrator and Accents - No, Just No

Whoever thought that Joanne Long could manage English and Scottish accents was completely out to lunch. While her general narration was fine, her accents are the worst I've ever heard. The quality of the audio is subpar as well, and it sounds like the narrator is reading in a tin can.

The story line is interesting but has some weird overly sexual parts with an assault scene that minimises the gravity of the crime. Part interesting mix of historical fiction, time slip and ghost story, part train wreck. I wouldn't recommend.

Another wonderful story from Irina Shapiro

I loved this book and the narrator was very good. if you love Outlander (Diana Gabaldon)and Susanna Kearsley's books then in my opinion you will love Irina Shapiro's books!

Love all her books and this is no exception. She tells the story of two separate times that are somehow connected. Worth the read or listen ;)

This was a fascinating story that follows two couples, really. In the story taking place in the past, we meet Brendan who is ultimately betrayed by his own brother. Along the way, he finds love but, without giving anything away, this is a sad story. In the present, a woman, Lexi, purchases a home that she wants to convert to a hotel and she sees a ghost. She and her contractor try to get the to bottom of certain mysteries and finds that her present and the mansion's past are intertwined. Overall, this is a story of hope and forgiveness. There were a few difficult scenes with violence and heartbreak but definitely worth the journey to get to a happy ending (sort of). It felt a little long, with a lot of characters so ultimately there were times I felt a bit lost.

i received the audiobook for free for an honest review. I have to say that I really liked the narrator. She did a great job differentiating the different characters and adopting different accents. Admittedly, I did get a little confused with the timelines but this happens especially when multitasking while listening! It helped that I also borrowed the book via KU so I was able to read some parts along with listening to the audio!

couldn't get through this book because the narrator. she just didnt capture my attention. I really tried to stick with it because I like the author. better luck next time

I enjoyed this Gothic romance. The story is solid, if somewhat predictable, the kind of predicatable lovers of Gothics appreciate. The main character was well developed and likable. The narrator’s voice is pleasant though her Scottish and English dialects need work. The accents didn’t spoil the audiobook for me, but they were distracting and shook me out of the story from time to time. All in all, this was a nice listen, and I look forward to more by this author.

Good story... horrible narration! Forced, false & off timed:( Onkt made it thru a few chapters then quit. I don't recommend wasting your time:(

I’ve had this in my library for awhile. Tried to listen when I first got it but just couldn’t get into it for whatever reason. Pulled it back up day before yesterday and COULD NOT PUT IT DOWN. I love this story. ♥️

I was riveted as I walked through this story. She left me on the edge of my seat in a beautiful way so often as she moved b/w the 2 time lines. The characters had me fully engaged in their story from the moment I met them. Another great story by Irina Shapiro.

Worth adding to your listening library

Irina has woven a wonderful story that mixes the present with a time in history, that at first does not seem to be related , but the artistry of Irina melds the two stories and make them fit together in a surprising way. As with all audiobooks the reader can either bring the story to life or get the book turned off. Joanne started the read a bit stilted, but don't give up listening. She opens up to the story and the three accent within the book making it a great read.

You can’t go wrong with this book or any of Irina Shapiro’s books. I loved the twist and turns of the story. It’s a must listen to. You won’t regret listening to it!