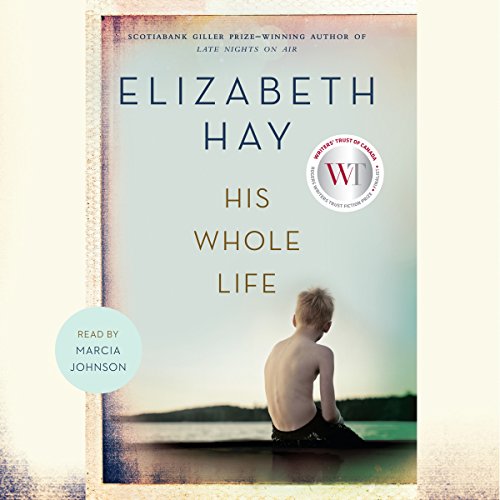 Starting with something as simple as a boy who wants a dog, His Whole Life takes us into a richly intimate world where everything that matters is at risk: family, nature, country, home.

At the outset, 10-year-old Jim and his Canadian mother and American father are on a journey from New York City to a lake in eastern Ontario during the last hot days of August. What unfolds is an enveloping story that spans a few pivotal years of Jim's youth and sets out competing claims on everyone's love: for Canada over New York; for a mother over a father; a friend over a husband; one son over another. With her trademark honesty, wisdom, vivid sense of place, and nuanced characters, Hay deftly charts the deepening bond between mother and son even as the family threatens to come apart.

Set in the mid-1990s, when Quebec was on the verge of leaving Canada, this captivating novel is an unconventional coming-of-age story as only Elizabeth Hay could tell it. With grace and power, she explores the mystery of how members of a family can hurt each other so deeply, and remember those hurts in such detail, yet find openings that shock them with love and forgiveness. This is vintage Elizabeth Hay at the height of her powers.

"Hay is a wise and astute observer of adolescence...His Whole Life is a moving reflection on nationhood and the evolution of an unbreakable mother-son bond." (The Globe and Mail)

"[She has an] evocative grace that brings to mind Annie Proulx." (Washington Post)

What listeners say about His Whole Life