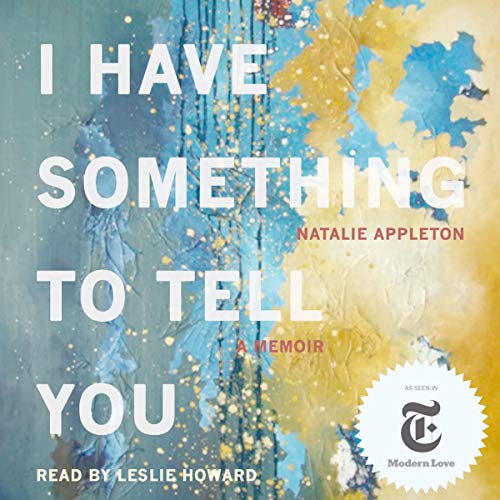 I Have Something to Tell You

On the eve of Christmas and a proposal, Natalie Appleton discovers she doesn't want to settle for sevens and starts over. So, she abandons everything in Alberta for Bangkok. Along the way, with startling illumination, honesty, and humor, Natalie unpacks the past that caused her to flee: cheating hearts, small-town suffocation, a tattered family, and a genetic disposition to madness. In Bangkok, Natalie kills an albino gecko, crawls into bed with a lamp seller, and nearly calls off her quest when she's almost attacked by a leather vendor. And then, at a grimy guesthouse one year after arriving in Thailand, everything changes.

I Have Something to Tell You is a lyrical, vulnerable exploration of the meaning of love, family, home, and the magic of the universe. It's also a captivating window into two equally exotic worlds - the oil-patch-laden prairies and the resplendent Thailand.

“Natalie Appleton’s memoir is both travel account and love story, gritty and graceful. A totally clear, honest and generous story of losing and finding oneself, and an indelible read.” (Alix Hawley, author of All True Not a Lie in It)

“Natalie Appleton writes beautifully and in the confiding voice of your very best friend. Anyone who’s ever felt the need to go far away to find home will surely see themselves in the lovely and compulsively readable pages of I Have Something to Tell You.” (Theo Pauline Nestor, author Writing Is My Drink)

“A gifted travel writer, Natalie Appleton writes about Bangkok with a journalist’s eye for detail and a poet’s turn of phrase. In short, sparkling chapters, she tells the tale of losing herself to find herself in an original voice with a 21st century spin. I Have Something to Tell You beckons irresistibly for readers to follow from small-town Canada to big-city Asia and back again.” (Elisabeth Eaves, author of Wanderlust and Bare)

A Story For the Young and Adrift

This is a love story. A love story with a country, an experience, and finding yourself. From the beginning, I understood Natalie. She's young. She's bright. She knows there's got to be something more to her life than having re same conversations with the same people for the next forty years. And so she goes off to find herself and teach English in Thailand. I went off to do disaster relief. Like I said, I get her. Sometimes, you feel a tub and you have to leave.

I enjoyed this memoir. I got to 'see' a place I'll probably never visit. Meet all sorts of people. That isn't to say I always liked Natalie. She does stupid things at times. Sometimes she was unbelievably naive. But it was like the people I volunteered with, you get close and you find yourself fondly shaking your head of laughing with them or occasionally gasping in horror. And the epilogue. The epilogue nailed this story from a memoir I enjoyed to something I will relisten to and suggest to others. A reminder that there are things that are meant to be and that sometimes we simply have to follow and wait.

The narrator was great. She WAS Natalie.She made it go from a book to a story being told to me by a friend.


I was given this book for free at my request in exchange for a fair review.