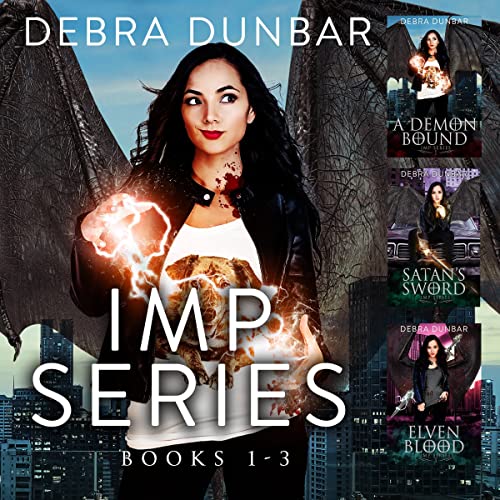 Written by: Debra Dunbar
Narrated by: Angela Rysk
Try for $0.00

Books 1-3 of the bestselling Imp Series all in one package!

A Demon Bound - All Samantha Martin wants to do is drink beer by the pool, play mischievous pranks on the humans, and get her hot neighbor in the sack - oh, and avoid the angels who won’t hesitate to execute her on sight. But when her naughty hellhound lands her in trouble and she’s blackmailed into catching a killer, Sam finds herself in the crosshairs of the very beings that want her dead.

Run to Hel and give up all the earthly pleasures she’s learned to love? Stay and face a certain death? Or use her impish wiles to and hope to survive? Satan's Sword - Bound by an angel, Sam is the only demon allowed to walk among the humans and live - if she follows the rules. But when Sam’s brother, Dar, finds himself in hot water, following the rules becomes impossible.

Retrieve an artifact from the vampires. Save Dar from centuries of enslavement and torture. All it takes is for her to perform a simple courier job, but with demons nothing is simple - especially when Sam must comply with the restrictions her angel has placed on her or face a punishment worse than death Elven Blood - Samantha Martin is an imp, a lesser demon from Hel. She has been living under the radar, posing as a human for the last 40 years, but now that she’s bound to an angel and holds the title of Iblis her life is...complicated.

Sam has become buried in angelic bureaucracy, saddled with a succubus house guest, and is fighting off a never-ending slew of demon hit-men. The powerful demon, Haagenti, won’t rest until she’s dragged back to Hel for “punishment”, and he has put a substantial price on her head – a price that threatens not only her, but the human she’s grown to love. When an elven lord offers to take care of Haagenti in return for tracking down and killing a demon half-breed, Sam thinks she’s found the solution to her most pressing problem. But finding and retrieving this hybrid monster isn't proving easy and time is running out

Speed up narration for best listening

Love these books. Narrator takes a bit of getting used to. Speed narration up to 1.5x and its much better to listen to.

I LOVE Debra Dunbar. I LOVE the Imp Series! I’ve read it at least a dozen times - and always restart it when a new novel or novella comes out. I feel bad for giving this audiobook a 3 star overall rating but it wasn’t because of the story.
I was SOOO excited to get this audiobook. Then, I hit play.
Angela Rysk reads like she’s standing in front of a classroom reading out loud from a text book. It’s stunted with many, many awkward pauses. There is absolutely zero inflection, no changes in tone when Sam is fighting vs when Sam is doing nothing. She makes no effort to make the story come to life which is what’s expected when one is listening to a FANTASY novel with demons and action and angels etc. Seriously, she reads this like she’s reading a shopping list. I will say that she makes sure to sound out every letter of every word.
I am so disappointed and so sad. Also a little peeved because I will not be able to finish this audiobook that cost me a pretty penny. It’s a waste.
I’ll go back to reading my Imp Series, with emotion and texture.

the books are good, this audiobook? Not so much!

First, the narrator is horrible. She sounds like a highschool chearleader and not a 40 yr old, smoking hot woman. Its like a child trying to imitate her mother. It is irritating!!!
Second, what are they teaching these kids in school now days?? Do they still teach the english language and how to correctly pronouce the words??? HaSatan is NOT pronounced as ha-saytan. It is pronounced HaSuhtahn! The word Iblis is not pronounced ib-bliss. It is pronounced Eeh-blees. Im not gonna list anymore of her shortcomings other than she needs to take her work SERIOUSLY!!!
Now for the author. She writes a great story. Though she needs to do more research into firearms. A "CLIP" does not feed rounds into the firing chamber of a pistol or rifle. That device is called a "MAGAZINE"! A clip is a vertical, metal strip holding a row of usually 10 rounds of ammunition. It is designed to rapidly force feed rounds into an empty or dry magazine. The author has other misconceptions about firearm use and operations. Nevertheless, she writes an interesting storyline and addictive characters. This audiobook borderlines between tolerable and a waste of money. By the Kindle version and read it. Its SOOO much better. It would be good if Kristine Hvam was the narrator.

Thank you so much for this very light and entertaining series. the characters were well developed and they story line was fun and exciting. What a naughty little imp. I hope to hear more from her.

Could have been great

The issue with this book isn't the story but the performance. It's awful. Awkward pauses and weak voice acting make it almost impossible to get into the book. I won't be buying the remaining books with this narrator.

I'm reading it a second time. I loved the books for the story, suspense and romance

I really loved this series so far. I find myself listening every chance I get. You really fall in love with our little Imp main character Sam. Even though she is a demon you find that she has for demon qualities and you root for her And want her to succeed. There is a lot of humor, an awesome human side kick, vivid sex, a great plot, and a broody angel we haven't quite figured out yet and still love. All in all what is it to love? I highly recommend

entertaining and a little comedic

I loved the narrator’s voice it made it really easy to get through all three books. super awesome read if you like fantasy with a little humor!

Sam doesn’t thrive to be most liked, but that’s what’s so appealing about her. She’s funny and selfish, but also loyal to her friends and family. She gets into way too much trouble trying to avoid trouble. It’s a hoot. Her character development is super fun to follow. I did however had to speed up the reading pace in order for me to be able to enjoy the listen. I’m about as impatient as Sam, so there’s that haha

I listened to the first 3 of the Imp Series together and rate them fabulous. I laughed, cringed and felt at moments so into the story I didn't want to go back through my own gate home. Angela Rysk did a superb job bringing the characters alive in audio.

Im returning this audio book because I absolutely cannot stand the narrator. I like this author and I love the character Sam from what I've heard in the Half-Breed series, but I can't pay attention to the story because of the narration. sticking to the physical book on this series.