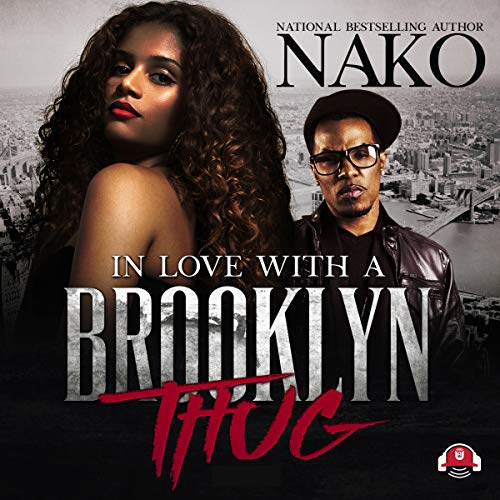 In Love with a Brooklyn Thug

Written by: Nako
Narrated by: Mishi LaChappelle
Try for $0.00

When what was supposed to be a fun date night opens Pandora's box, Nia is left feeling betrayed. In this suspenseful and romantic series from Nako, love has been put to the ultimate test. Can the past be forgiven?

Nia Hudson, fashion powerhouse and philanthropist, swore love wasn't for her because she was too busy chasing after her dreams. The quiet girl from Brooklyn refused to go back to the projects. Being raised by her selfish aunt was the push she needed to run far away and never return. But when a blast from the past resurfaces and refuses to take "no" for an answer, Nia decides to give him one hour of her time. Surprisingly, one hour turns into a week, a week transpires into months, and before she knows it, the two have become a couple.

Together, East and Nia don't paint the perfect picture. They have nothing in common, and in fact, he's the complete opposite of everything for which she stands. Dangerous, thrilling, edgy, and secretive describe her current beau. East is definitely living life in the fast lane, selling everything he can get his hands on and not knowing when the Feds - or friends disguised as enemies - might come after him.

What listeners say about In Love with a Brooklyn Thug

This book would have been good...

This book had a lot of unnecessary rambling, how many ways can you say BIG is dead and been dead. We get IT!!! he gone luv stop stretching it to make the story longer. You keep repeating yourself. She can’t tie her shoe cause big is dead, she can’t butter the toast because big is dead... please do not bring him up in book 2. Guest what Big is DEAD!!!!!!

Loved it, Such a great book. I can not wait for part 2. Great Author

This book was ok.... a great love story but not enough action. It seem like it got better the last 2 min of the book

The book had its moments , i feel like it was dragging on and in something wish it could have gotten more to the the point.

It was TOO well-developed. No action, no shocking secrets, just a slow love tale. I thought there’d be some excitement but it’s like a boring day to day story of a busy successful woman and her man-that’s all! Nothing more than that. I’m angry I listened to over 6 hrs of nothing. 3/10! Narrator was amazing!

love the book but pissed that there are 3 other books that are not on audible. guess I have to get the actual book.😪

Great book. I love love stories, it took a while for the secrets to be exposed in this book. Everybody had their secrets in this book and they keep you guessing and wondering what is going on. Hate the ending, I have so many questions. When is part 2 coming out, Can we get a release date please?

love everything about it!!!

cant wait 4 pt 2 this book was everything, it even dropped some true life nuggets to live by!

The book was good and cut. Although I did not like how they played me in thw end and ended the book the way they did smh... Need to read that second book ASAP