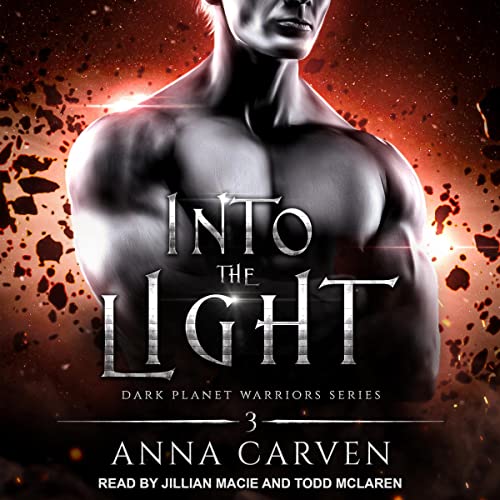 When your mate is a Kordolian General who's betrayed the most vicious Empire in the Universe, things tend to get a little heavy from time to time. For the last six months, Tarak's had to divide his time between Earth and space, dealing with various...problems.

But he's home now, and he tells me he's not going anywhere.

That's good news, because our baby's on the way, and I'm dying to get out of this boring, stifling limbo they call the Diplomatic Zone.

Now that Earth is surrounded by my warships and the Kordolian Empire has been held at bay, I can give my full, undivided attention to my mate.

Pregnancy has made Abbey even more beautiful, and I am in awe of the growing life she carries inside her.

But I must be ever-vigilant, because the shadow of the Empire lingers, and I must protect what is mine, at all costs.

What listeners say about Into the Light

they are a great couple

seriously this is how you write a lovable apex predator alpha male who will do anything for his woman and have no undertones of potential abuse. he's commanding and domineering but there's no point where you're like this could turn dark over a couple years.

the action in the story is really good the concepts are fun and the overall threat that they're dealing with is a good threat this is a well-written story and a really good time I would highly recommend this one.

I’ve just fallen in love with this series! This audiobook was about General Tarak and Abby from book one, except now they are expecting a baby! Of course, the Big Bad (as Abby calls him) is in overprotective mode. They decide to go to the Outback of Australia where Abby’s aunt lives to get away from humans who are nosey. But the Empire isn’t done with them and when a hugely pregnant Abby is abducted, the General is on his way to rescue her! Great narration and I love the male narrator’s voice!

This series is amazing. I’m so in love with the characters. It’s so refreshing to read an adult series written by an intelligent author. I’d give it more than 5 stars if I could!!!

Abbey’s pregnancy has progressed well, but her obstetrician suddenly refers her to an alien specialist, raising suspicion in both Abbey and Tarak. Too cheer her and offer support, Tarak takes Abbey to visit her aunt on her remote Outback station. The visit feels right and they both choose to make it their new home. Unfortunately, Earth and Kordolian interests follow them from Terra Nova; endangering Abbey and the baby.
Good narration. I really like Macie as the voice of Abbey Kendricks, and McLaren as the voice of General Tarak al Akkadian. I do recommend Macie practice her screaming;);)
I’m happy to finally write the review that Carven deserves for the book and series.
Recommend

Into The Light by Anna Carven

This is an excellent series and the narrators do a fantastic job in their expressions for each character. Highly recommend.

Tarak and Abby have a baby

I loved this story. Abby is kidnapped by an evil corporation who are in cahoots with the evil Kordolians. she never gives up hope that Tarak will rescue her and he does.

I enjoy this particular genre of literature. I look for a perfect balance between romantic adventure and sex scenes. With a perfect balance, the sex scenes just add an exciting flavor to the whole story. However, too many sex scenes becomes like eating too much candy, flavorless and boring. The first two books of this series were perfect in the balance but this particular story was nothing but sex, sex, sex the first half of the book. I got to the point where I was fast forwarding through those scenes. The only reason I gave the story two stars was because it finally, about halfway through the book, got to the point of a romantic adventure. I plan to listen to the next book, but if it’s anything like this one I will end the series at that point.

I love the male narrator, he works so well with the main male character. The story was good but it took a long time to find the plot.

I love to listen to the story it gives it new depth. Can't wait next.

I hate that the heroin is portrayed so naively. There's no way she's grew up the way it's laid out, and not know her mate has logical concern of deceit... this drags the story along. should have been a novella instead a stand alone.

This is the second part of Abby and the General's story. It was nice to see their life taking shape on Earth. Who knew....humans were just as vicious, destructive, power-hungry, and evil like the Kordolians. Shocked....