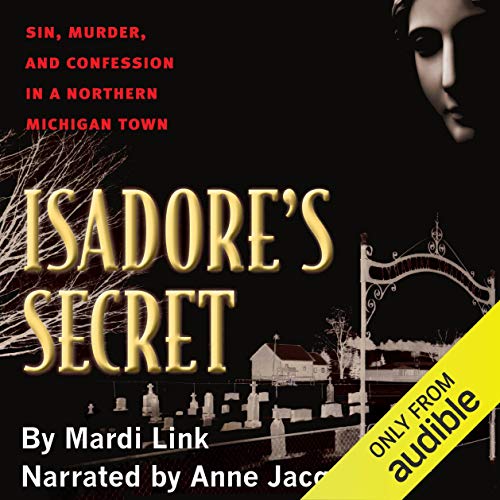 Written by: Mardi Link
Narrated by: Anne Jacques
Try for $0.00

A gripping account of the mysterious disappearance of a young nun in a northern Michigan town and the national controversy that followed when she turned up dead and buried in the basement of the church.

Says New York Times best-selling true crime author Gregg Olsen: "An astonishing story told with beautiful, lyrical prose that never overshadows the facts. Mardi Link's achievement with Isadore's Secret is nothing short of stellar." This true story was the basis for the Broadway play, The Runner Stumbles, and the movie of the same name. In 1907, a Felician nun disappeared from her rural convent. When her bones were found buried in the dirt-floored basement of the remote, Gothic church she served, it caused a national sensation. Who killed her? The handsome priest? The jealous housekeeper? And, what other secret was uncovered along with her bones?

What listeners say about Isadore's Secret

Link proves not only a thorough researcher in this elegant piece of true crime literature but also a considerably graceful writer as well. The murder of a nun, suspicions of sex, jealousy and corruption. A complex and complicated tale told masterfully by this accomplished writer.

This is a "page turner". I plan to buy it in print. I'm not a true crime reader, but I found this case interesting, so I thought I'd give this book a try. I mostly read fiction, but this book definitely opened my mind to the true crime non fiction genre. This book details so much more than just the murder and trial. It paints a picture of how this case was received by the early 20th century public, press, church, and people directly involved with it. It shows how this mystery effected an entire community, and how they moved forward after it concluded. It examines the victim and people involved with the victim, crime, investigation and trial as flesh and blood human beings, and not caricatures of a sensational tabloid worthy story. I am not from Michigan, and I don't know much about early 1900's Michigan, but this book did not just suffice my curiosity, it was also very educational. I saw this case on Deadly Women, and it peaked my interest, so I googled it and found this book. I am so glad I did. I love that show, but this book really makes the Deadly Women retelling look like an amateur YouTube documentary with terrible lighting and bad camera angles.

Had to give this 5stars , even though I became bored with some of the repetition of characters stories.It's so much better than a lot of true crime. The writing is straightforward and clear. One is introduced to the time and place as well as the people of the area, without drawn out descriptions.My credit was well spent on this one.Very interesting story.

Like a Christie cozy in an English village & true

like a Christie cozy but it's true. well crafted mystery, we'll told, and interesting to the end.

What made the experience of listening to Isadore's Secret the most enjoyable?

That it was true crime in my native state.

What does Anne Jacques bring to the story that you wouldn’t experience if you just read the book?

At first I wasn't to sure I wanted to listen to the book because it seemed slow but once it drew me in I could tell her voice was right for the story.

When the nuns encircled Isadora's bones, very moving for me and I am not Catholic but I am a Christian. I found their love towards their sister very moving and Godly.

secrets of a little rural church

loved this story of betrayal broken vows cover up did she do it did she cover for some one . did she change after conviction.. the church has been caught in other cover ups

Do Not Judge A "Book" By Its Crap Cover

Beautifully written and researched. If it was done any other way this story might of dull.

I mean it's about old timey Catholics, but the way the author weaves in personal letter and descriptions frames each participation in a fascinating light.

She even managed to make the details about Catholic laws and rituals interesting.

On par with Starvation Heights

Story okay but I struggled to pay attention at times due to the sheer amount of repetition of the facts presented in the story.

Interesting story but a bit difficult to follow. I caught myself zoning a little too often with this one but I was able to get the gist of what was going on. Still a good story line as most true stories are.

OK but skips in the beginning

It was OK but should have moved the story along alot quicker. Why did the clergyman Edward move so much after and before Isadore. I did fall asleep a few times but I don't think that was explained, but was certainly was discussed enough. Its OK I just shouldn't have gotten a book about religion.