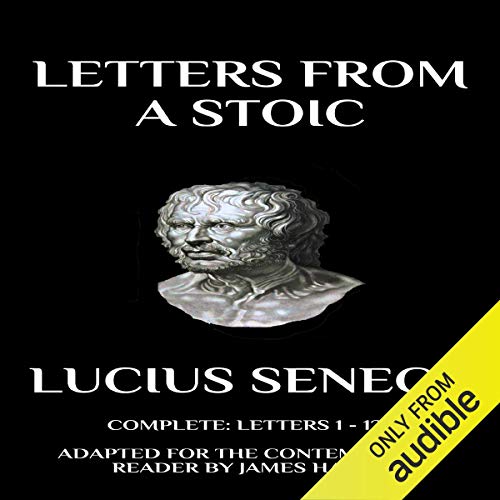 Letters from a Stoic: Complete (Letters 1 - 124) Adapted for the Contemporary Reader (Seneca)

Letters from a Stoic is collection of 124 letters which were written by Seneca at the end of his life, during his retirement, and written after he had worked for the Emperor Nero for 15 years. They are addressed to Lucilius, the then procurator of Sicily.

The letters highlight many moral and ethical ways to live, and address many of the issues known to man, about life and death.

Each letter has been carefully adapted into modern English to allow for easy listening and understanding.

This is the complete volume containing all 124 letters.

What listeners say about Letters from a Stoic: Complete (Letters 1 - 124) Adapted for the Contemporary Reader (Seneca)

A couple of the chapters are recorded badly

Brilliant and a great read. But some of the chapters are garbled. Two of them. I even deleted the book and redownloaded it... still garbled.

Outside of those two short parts the content is amazing and life changing. I wish they taught this stuff in school.

I really don't like the young man's (?) narration as it sounds like he is looking at a big tome and thinking 'got to get through this.' And slowing it down doesn't quite work.

The letters by the famous Stoic to his friends is full of mature life advice. I find it most enjoyable listening to one to three letters per day when I start my day, go for a walk or have my breakfast. It takes some attention -- don't try to do anything that requires distracting attention while listening. It's serious although not stiff. I won't do a sit-through read - not just because of its length but so I can cogitate on the contents piece by piece.

I enjoyed this book as receiving wise words from a caring friend.
Overall I found it calming and soothing.
What I get from it as a general idea is to gain control of our actions and being. Also, it is to make the focus of our life the learning of how to live and die (stoic philosophy) as a means to gain genuine happiness. Stoic philosophy is about gaining control over our emotions and our life overall, rather than having our emotions, desires or anything else, control our being.
The idea is of not wanting more than what is necessary. It is of being "want free" so to stay free and in control, not controlled by your wants.

For example, he mentions wealth is evil because it is wanting more than is needed. He describes the rich around him over-indulging in food and exposing their wealth with lots of luxury, and then would live with the fear of losing what they have and do anything despicable to prevent this. This description would be the evil. I get that the focus should not be to get the wealth for it's sole purpose, to then be controlled by it. Furthermore, just having more never satisfies the want. It is not the wealth in itself that is evil. The idea is to focus on what is honorable rather than wealth. Wealth can come but won't control you. What is honorable is to have your spirit and actions in harmony. It is to do the very best with what is given to you, with your capacities, in all matters. Do not entertain grudges for not having more and if wealthy, do not inspire envy from others by your behavior.
Honorable behavior is to live and die with dignity, remaining calm and being consistence in your actions whatever the circumstances. What we cannot control, we should not moan about but accept it as our duty to carry out and perform it with dignity.

He also says that emotions are vices to avoid. This can be confusing but here is how I understand this.
It is to not let our emotions master us but rather have self-control.
To deny our emotions is not the solution. I know from experience that cutting oneself from emotions gives way to having your emotions control you, regardless. This indirect influence makes things even harder to solve because you don't know what is making your life miserable. You live in denial.

The answer I found, and that the author talks about when talking about friendships, is in talking to a trusted person openly, without restraint. Not to everybody and anybody, but a trusted person. It could also be a therapist. At the very least, I would add talking to yourself aloud because by hearing yourself you get aware of your nonsense. Writing can bring the same benefit. The idea is not to be told by someone else what to do but to have accountability and an opportunity to express freely. With expression we have a better chance to sort things out, find solutions and avoid storms of emotions taking control over us. The other person can merely reflect on us what they see and hear and help us gain awareness. They can point things out and help give direction but the idea is to keep control on our lives rather than being shipwrecked by our emotions.
The whole idea of the book is about having self-control, not losing it to circumstances, emotions or anything else.
This is the ultimate virtue and honorable way of living.

Would you consider the audio edition of Letters from a Stoic: Complete (Letters 1 - 124) Adapted for the Contemporary Reader (Seneca) to be better than the print version?

Do not know have only listened to the Audio edition.

He helped to amplify the existing material so that the listener could have a better understanding.

Terrible Oration of a Great Writing

The content is fantastic. 10 stars. Which makes the audio all the more unbearable. The reader drones on, misses key punctuation, does not enunciate, and in no way conveys the import of the words he reads.
The words require thought and reflection, but the pace of the reading leaves barely enough time for basic comprehension.
There is also an early chapter that has more than a dozen editing errors where whole passages of text cut out mid-word. I thought at first it was a data streaming issue, but i played it several times and the skips happened at the exact same words every time.

Buy the book and read it, but don't waste your time with this audio-book.

This should be mandatory listening for everyone over the age of about 15.

The narrator gets the job done admirably, even though the material has the potential to be extremely dry.

Letters from a stoic

A compilation of letters on stoicism.I enjoyed listening to these.Greg Douras was a fine narrator.
I was given this book by the narrator,author or publisher free for an honest review.

Sentences were cut off and the reader would be cut off constantly and then start in the middle of another sentence.

Chapter 20 has some short skips, a word or two sporadically not being spoken. Looking to get a replacement.

Not only is the reading fast with strange word emphasis, the recording skips quite a bit, missing words (how many I have no clue). Going to find a different version because I just can’t get through this one. Save your credits, folks.

This book offered thoughtful insight to human behavior however, it was poorly performed to the extent where I stopped listening. I will likely read the book myself.