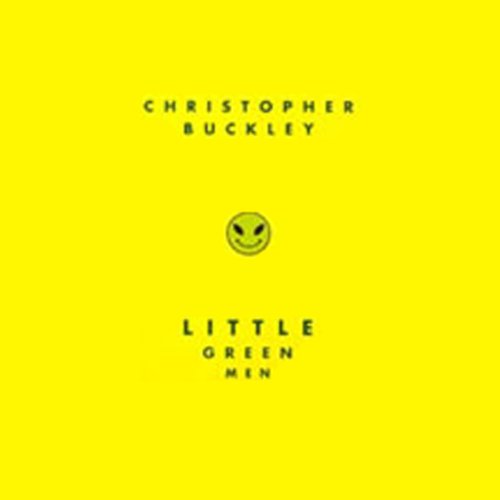 Written by: Christopher Buckley
Narrated by: Mark Linn-Baker
Try for $0.00

In 1994, Christopher Buckley published one of the most acclaimed and successful comic novels of the decade, Thank You for Smoking. Now, Buckley returns to the strange land of Washington, DC, in Little Green Men, a millennial comedy of manners about aliens and pundits...and how much they have in common.

The reluctant hero of this hilarious novel is John Oliver Banion, a stuffy Washington talk-show host, whose privileged life is thrown into upheaval when aliens abduct him from his exclusive country-club golf course.

But were his gray-skinned captors aliens...or something far more sinister? After Banion is abducted again - this time in Palm Springs - he believes he has been chosen by the extraterrestrials to champion the most important cause of the millennium, and he embarks on a crusade, appearing before a convention of UFO believers and demanding that Congress and the White House seriously investigate UFOs. His friends and family suspect that Banion is having some kind of manic-depressive midlife crisis and urge him to seek therapy before his credibility as a pillar of the punditocracy is ruined.

So, John Oliver Banion must choose: keep his establishment status or become the leader of millions of impassioned and somewhat scruffy new friends who want to expose the government's secret alien agenda.

Little Green Men proves once and for all that the truth is out there. Way out there. And it reaffirms Christopher Buckley's status as the funniest humanoid writer in the universe.

Coming soon from Christopher Buckley: One of Our Whales Is Missing

"Little Green Men is a delicious, ingenious treat. Christopher Buckley is an author of many talents, with a range of abilities that includes a penetrating comic intelligence and a deft flair for storytelling that makes this novel a truly joyous page-turner." (Joseph Heller)

In Buckley's Little Green Men government "baggers" go around snatching overweight women and thereby ensuring continuing funding for space and defense research. Then in a moment of drunken inspiration, they kidnap John O. Banion, and things get interesting. If you've read Thank You For Smoking or No Way To Treat A First Lady, you already know that Buckley can make you laugh. What you may not know is that no matter what the subject matter, Buckley has a way with words and an insider's view of Washington that will make you snicker at first, and later roll with laughter. Instead of wincing at the "conspiracy theory" adopted in the book, you'll find yourself nodding along, captivated with the world Buckley creates. This one is a five star triumph!

I have listened to this book over and over and over again after first renting a cassette copy of it at a Cracker Barrel restaurant. I bought the cassette version until the cassette broke, then I found it on audible and had to buy it again. Christopher Buckley has a way with weaving high brow words with slap stick comedy. Mark Lin Baker reads the story and brings all of the characters to life. This is an incredible "theater of the mind" comedy that will have you laughing so hard at the wild analogies and references that are made. I always think of this story as a "What if Rush Limbaugh were abducted by aliens and how would he handle it". With his credibility on the line and the search for the truth. Obviously it's not Rush, but Oliver Banyon, a pompous political interviewer on television rather than radio.

I strongly recommend this to anyone who wants to laugh themselves silly on a long drive or just to escape. I have listened to many audio books, but this is by far the best in entertainment. Great job Mark Lin Baker!

What an audio book should be!

This is my first Buckley book and what a treat. I was hooked early and stayed all the way. And you can't help but wonder "could this really be the way and reason abductions might be happening...?!?" Most of all though, the narration is an absolute joy. This is the way an audio book should be read - it brought all the characters alive for me and made it very tough to put my iPod away when I got back from my lunch hours.

What a riot!!!! Stuffy politicians watch out.

This book does for politicians what "Thank You for Smoking" did for the tobacco industry. Buckley keeps you chuckling through the entire book.Great entertainment.Wish Buckley had more of these!!!

After all the great reviews I was expecting a really great audiobook, you know, a couple witty jabs at politicians, the US. Government, and of course lots of fun stuff about aliens. The main running joke about the government was that it was filled with stuffy, pompous, fat cats who only cared about their careers. That?s not sidesplitting humor. That?s not even that funny, its just truth. The characters in the book were all one-dimensional clich?s, the sexy blond, the loony UFO fans, and the nerdy government recluse. The only exception to this might have been Banion, the main character, who had two one-dimensional personalities that appeared in different scenes and contradicted each other. One moment he was a politically savvy pundit, the next moment he was a raving lunatic. Admittedly Rush Limbaugh, who Banion is possibly modeled after, possesses both these character traits, however it just wasn?t funny in the book. I think the problem was that Christopher Buckley did such a good job making Banion look like a stuffy jerk, that I was honestly hoping he would be assassinated by the end of the book. Then there is the plot. Yes, a humorous book should have a ridiculous plot, but the plot of Banion immediately rising to power over a politically persuasive mass of UFO nuts seemed, to me, to be unbelievable, not in that, ?Oh that?s so off the wall!? laugh out loud way, but in that ?Gosh that?s so dumb.? way. Finally, the ending looks as if the author just got bored with writing and tried to end the book in five pages or less.
The one good thing I will say is that this was an excellent production. The musical cues were well placed, and the narrator, Mark Linn-Baker, did a wonderful job.

Buckley's endgame is very poor in this book

But this one, like the other two, peters out at the end.

In fact, this one peters out even worse than the other two.

The author knows how to set up the situation, but once having written himself into a corner, doesn't know how to get out.

It's as if he suddenly realized that the manuscript is due and so he ends if without any of the cleverness and care taken in the beginning of the book.

But as pure ear-candy, it's not that bad. And the narrator of this book is quite good.

and more of the same. This book is in many ways similar to Buckley's Thank You For Smoking. Except instead of big tobacco it takes on politicians, the talking heads on tv, and the Washington political establishment as a whole.
Unfortunately, it's not nearly as clever as "Thank You..." and many of the jokes, instead of being witty, appeal to the lowest common denominator. Still, a good listen overall.

I selected this book on a whim to listen to during a car ride - boy am I glad I did. This wonderful book is hilarious, satirical and suprisingly incisive. While it's by no means Tolstoy, 'Little Green Men' is a perfectly entertaining listen that acerbically sends up American media culture and mass-pop-hysteria.

Plus, the narrator (yale-educated thespian Mark Linn-Baker, who you may remember as "Cousin Larry" on 'Perfect Strangers') is brilliant, providing the necessary energy to fuel a plethora of campy voices.

Pick this one up immediately!

One of Buckley’s best

I love this authors work and although this is an an old book I found it to be very funny. I laughed out loud many times. The only weird part was knowing that there was an actual violent March and attack on Washington 20 years later that could not even have been conceived when this book was written. So clever and well written!

Did they record this over the phone?

The audio is so bad on this book that I stopped listening. It sounds like the narrator left this on someone’s voicemail. Awful.