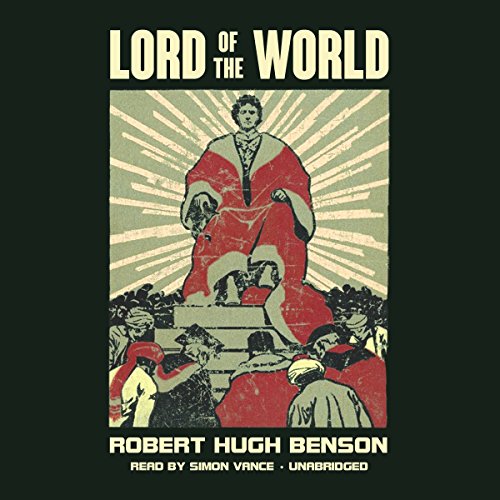 Lord of the World

Secular humanism has triumphed. Everything the late Victorians and Edwardians believed would bring human happiness has been achieved: Technology has made it so no one needs to work for a living, the social sciences ensure a smooth-running social order, and, in the name of tolerance, religious beliefs have been uprooted and eliminated except for a single holdout - a largely discredited and rapidly shrinking Catholic Church. Yet people are unhappy.

What has been created is a sterile world of crass materialism, a world without spiritual dimension, a world where people daily choose legalized euthanasia over the emptiness of existence. Out of this culture of despair, there arises a charismatic leader: Julian Felsenburgh. Soon the masses are in Felsenburgh's thrall, and he becomes leader of the world. But in their eagerness for change, have the citizens of the world embraced the Antichrist and hastened the end of days?

Father Percy Franklin remains a bastion of stability, even as the Catholic Church disintegrates around him. Finally outlawed and driven underground, it is only this small and shrinking church that stands against the "Lord of the World".

What listeners say about Lord of the World

While written in 1907 this book is surprisingly prophetic, more so than Brave New World or even 1984.
There are a few niggles though. The use of Latin, especially in the final chapter, is untranslated and I had to google for the English translations.
Overall though a pertinent and interesting take on the rise of a humanistic society.

Though some of the depth this book would be lost on anyone who is not Catholic, it stands as one of the great apocalyptic novels of the twentieth century. The performance was excellent with captivating passion that assists the listener in immersing himself in the story. A great read for all and a must read for all Catholics.

Benson in 1907 crafted the dystopian tale 'Lord of the World.' Too bad for us that this master died at 43. Many of hIs descriptions vividly set forth in this book are now fleshed in and can be experienced in our own neighborhood!

The narrator is great, except for his Latin

What did you love best about Lord of the World?

Mabel realizes the lie she had been sold

What aspect of Simon Vance’s performance would you have changed?

No, the various bits require some time to sink in

A little spooky considering our times.

It’s like a current event book for our times. Masonry ideas rule the day, the Church is dealing with corruption, sexual scandal, changes on liturgy and doctrine and is rapidly on the decline. The stage is almost set, time for the main event.

The wordiness of the book made what could have been half the length.... sort of like. Atlas Shrugged it definite is foretelling the future..... too fast and too long

worth a second, third read!

I read the book a 2-3 years ago and got more out of it this 2nd time around. I'll read it again and probably again. Maranatha!

Interesting and ominous parallels to the current day. Noticed that apostates actually left the Church in the story, as opposed to staying in and making a mess ("¡Hagan Lio!").

Pope Francis recommends this book. I can see why. A memorable cautionary tale about the current view of morality in many societies, i.e. that the ends justify the means. This view leads to "isms" like Nazism, racism, etc.

Prophetic with clear and refreshing Theology

Aside from an interesting view of the future of technology from 100 years ago, political and social predictions seem frighteningly believable. The theological insights are clear, insightful, and have a refreshing perspective.

the future is now

this is almost creepy in its depiction of the end time. great book through and through. keep praying and watching