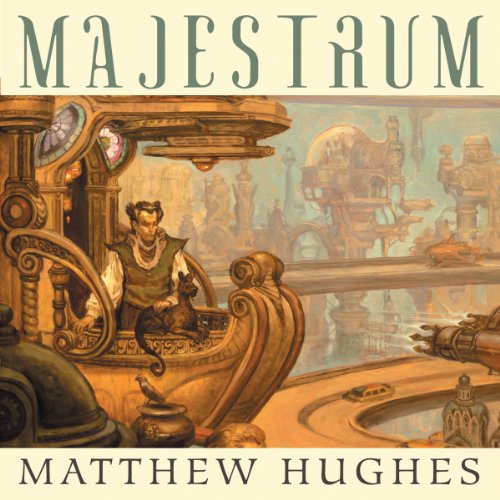 Henghis Hapthorn is the foremost penetrator of mysteries and uncoverer of secrets in a decadent, far-future Old Earth, one age before Jack Vance's Dying Earth. A superb rationalist, he has long disdained the notion that the universe has an alternative organizing principle: Magic. But now a new age is dawning, overturning the very foundations of Hapthorn's existence, and he must struggle to survive in a world where all the rules are changing.

In Majestrum, Hapthorn is on the trail of an unknown killer who collects body parts from his victims. The search leads him off-planet, into the Ten Thousand Worlds of The Spray, then turns in an unexpected direction as the freelance discriminator learns that an ancient and evil power is plotting to reassert its dominion over Old Earth.

What listeners say about Majestrum

Good story. Poor narrative performance. Could have been brought to life by a stronger reader. Wish I had experienced it in print.

The story is just ok. But for the last three hours, I was mostly looking forward to being finished. Only because it was mediocre. The writing has a lot of "he said", "he replied", "he spoke", "he wondered aloud", "he thought to himself" etc. but in and of itself, not a particular issue, but when it's noticeable, there may be a problem. (despite the many, many, many ways to say "he said".) More of a problem for me - and some of this is probably nit-picky - was the narrator. Some things bother me a lot and one of them is reading a book with unintentional grammatical errors, another is a narrator that mispronounces reasonably common English words, presumably because he (or she) simply did not bother to make sure he knew how to pronounce the words in the book. Maybe he thought someone would fix it in post-production? They did not. "Sir, I need examples", say you. Very well. What do you call a raised platform on which a speaker or leader addresses a group or accepts fealty from others? Why that is a "Dais" you say. It sure is. "DAY-ISS". This narrator repeatedly calls it a "DIE-ESS". Ugh. Like 8 times in the same chapter, I think. Never once did he actually look at the word and say, "hmmm. I wonder why the "A" is before the "I". Perhaps I should consult a dictionary." The next one is third grade level reading from a professional (paid) narrator... Ready? Picture this: Up on the dais << notice the continuity of theme >> there is a Big-chief-ruler-of-everyone. Girl approaches and does a small bent knee bow, while holding out her skirt and lowering her eyes in respect. What do you call that? Ah, yes. A Curtsy. Curtsy. Anyone that reads knows that, yes? Unfortunately, our narrator says something like "so-and-so approached the Chief-Ruler and..." (do you want to guess?... Come on! What do you think she does? Say it. Out loud. ... WRONG!) In this version she gave him a "small courtesy". I had to go back a couple times (thanks for the "back 30 seconds" button, Audible.) to make sure he really gave the word three syllables. He did. Any of you that think this is petty is welcome to your opinion, and in general I know it is. But again: There were other examples in the reading. And honestly, someone who gets paid to read into a microphone, ought to know how to read at least common words. Selling yourself as a narrator demands it. I'm done. Did I mention there were other mispronunciations besides DAIS and CURTSY? I did. Good. Because there were.

An homage to Jack Vance

Majestrum is a relatively short science fantasy set in our own far-future universe which has been colonized far and wide by humans from Old Earth. The protagonist, Henghis Hapthorn, is a “discriminator” (“he unravels conundrums, picks apart puzzles, uncovers enigmas”) who uses his keen logical skills to solve mysteries.

But some strange stuff is going on: Mr Hapthorn’s integrator (a sentient computer which assists him in his work) has recently donned flesh and blood and become more like a familiar than a computer. Also, the small intuitive part of Henghis’s psyche has suddenly asserted itself as a separate personality which shares Henghis’s brain and body. These occurrences seem to indicate that sympathetic association (magic), which waxes and wanes across the eons, is now rising again. And soon Henghis Hapthorn’s double personality and his familiar find themselves hunting an ancient evil force which is trying to resurface.

Majestrum is a fast-paced novel which reads much like a crime thriller (Matthew Hughes writes those under the name Matt Hughes) with a heavy dose of sarcasm, irony, and dry humor. Hughes is known to be a Jack Vance fan (read his appreciation of Jack Vance which he wrote for us upon that author’s death), and this influence is obvious. The novel reads much like an homage to Vance. Even the cover art was created by Tom Kidd who does much of Vance’s cover art. Majestrum and Hughes’ other ARCHONATE novels are set in a Dying Earth universe that’s very similar to Vance’s famous setting. The writing style is purposely magniloquent with numerous ten-dollar words (e.g., peregrinations, transmogrification, pansophical, ratiocination) and the characters “ascend” rather than go up, “peruse” instead of read, and “ascertain” instead of figure out. As in a Vance novel, all of the characters speak this way, not just the upper crust.

Hughes imitates Vance’s droll humor and absurd plotting perfectly, and there are many laugh-out-loud moments such as when Henghis has to put on upper-class ornamentation so that the nobles can perceive him, when his integrator/familiar falls asleep at crucial moments, and when hardened criminals are given to the Corps of Buffoons, fitted with coercion suits, and compelled to publicly act in bawdy plays. Even the character names are funny and noticeably Vancian: Glam Botch, Bristal Baxandall, Vhobald Hammis.

Despite the obvious mimicry, Hughes’ characters, ideas, and plot are original, making Majestrum an inventive and entertaining novel in its own right, and a perfect read for a Vance fan who has tragically run out of Vance to read. Fortunately, there are several more books in Hughes’ ARCHONATE universe.

I listened to Audible Frontiers’ recent version which was read by David Marantz. It took me a little while to warm up to Marantz, but I soon decided that his voice, which lacked much inflection or enthusiasm, fit Hughes’ droll style and Henghis Hapthorn’s personality nicely. I recommend Majestrum on audio, but if you don’t like it immediately, give it a few chapters and I think you’ll change your mind.