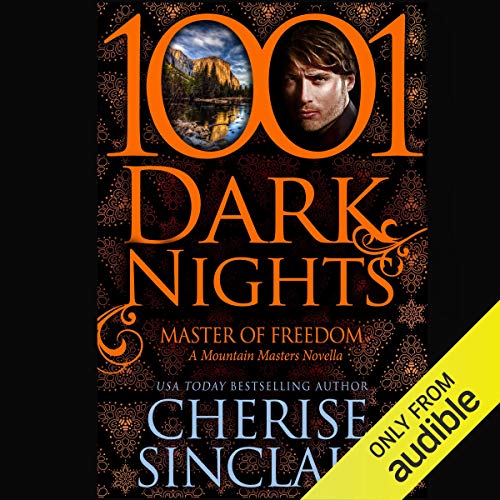 Written by: Cherise Sinclair
Narrated by: Paul Boehmer
Try for $0.00

Detective Atticus Ware gave up Idaho to start again in the California mountains, close to his imprisoned brother. Although he's found good friends, the experienced Dominant wants more than the "do me" submissives flocking around him. He needs a woman to give her heart, as well as her body.

Finally, Atticus has found the woman he wants in his life. In his bed. In his cuffs. Only she keeps backing away. Well...if he has to help a little counselor get her head on straight, he's just the Dom for the job.

What listeners say about Master of Freedom

I have all of Cherise Sinclair's audio books. I truly enjoy the stories with their mature themes. This one was very difficult to listen to because the narrator was so bad. It is the first book I have listened to of his and I will strive to avoid listening to any others. His cadence and badly timed phrasing was distracting.

This book was pretty decent. Not Cherise’s best work but still pretty good if it weren’t for the horrible narrator. Sorry, Paul. Romance and southern accents aren’t your thing.

🌻Not quite as entertaining as, The Shadowlands 🌻

I enjoyed the story overall, however, I like the characters of the Shadowlands more, than in this series. Perhaps if I had started at the beginning, I’d feel different.

This particular Novel is less graphic, sexually, than the Shadowlands books, also. That may be appealing to listeners that find that series a bit too much.

With that being says said, I would be interested in exploring this series more. It was definitely a credit worthy listen.

He didn't have any emotion as he read the book. A couple of times I started to fall asleep.

I love the author and the story line of this book but the person that read it left A LOT to be desired.

Still love the story but not the reading of it

I didn't truly enjoy the narrator's reading of this story. He didn't sound like a dom at all and it was truly bothersome with the misspeaking of his liege's name as Javier and not Xavier. Still enjoyed the story but won't be listening to it as often as other of the books in the series by this author.

Love the story...reader not so much

I really enjoyed the book and story. I have read the story prior to listening so I was able to get past the poor performance of the reader.

The reader changed Xavier to Javier which was disappointing. He has an odd cadence in his reading and was not very good in infusing his voice with the emotions of the characters or scenes.

they said Javier not Xavier. other than that I thought the book was very entertaining. I will probably continue to listen to it over and over again.

The narration of this book was terrible. It completely ruined the book for me.

Read the book instead

I have read the book and enjoyed it. I have not heard this narrator before and he did nothing for the story. Apparently, he doesn't speak Dom. Give it a pass and read the book.

Ugh.. What a horrible narrator!

I love Cherish Sinclair’s stories, but I can’t enjoy this one! This narrator is atrocious! All his voices sound the same and he is horrible at figuring out where to put emphasis and his pacing is terrible. Just no.