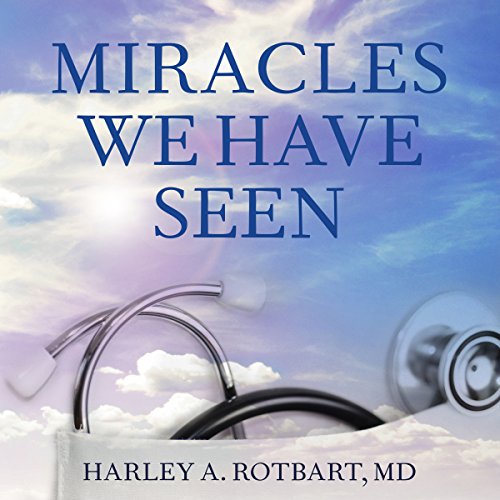 Miracles We Have Seen

This is a book of miracles - medical events witnessed by leading physicians for which there is no reasonable medical explanation, or, if there is, the explanation itself is extraordinary. These dramatic first-person essays detail spectacular serendipities, impossible cures, breathtaking resuscitations, extraordinary awakenings, and recovery from unimaginable disasters.

Among the extraordinary cases poignantly recounted by the physicians witnessing them:

A priest visiting a hospitalized patient went into cardiac arrest on the elevator, which opened up on the cardiac floor, right at the foot of the cardiac specialist, at just the right moment.

A tiny premature baby dying from irreversible lung disease who recovered almost immediately after being taken from his hospital bed and placed on his mother's chest.

President John F. Kennedy's son Patrick, who died shortly after birth, and whose disease eventually led to research that saved generations of babies.

Miracles We Have Seen is a book of inspiration and optimism, and a compelling glimpse into the lives of physicians.

"A beautifully written collection from physicians witnessing the mystery and power of the human body and spirit in the most extreme circumstances. This is a unique contribution that will inspire and edify." (Jerome Groopman, MD, Recanati Professor, Harvard Medical School)

What listeners say about Miracles We Have Seen

Excellent in every respect

A VERY encouraging book capturing a wide variety of experiences from serendipitous to outright miraculous. Down to earth for novices but enough details for professionals to understand. READ IT!

Well narrated, good explanations, told from a kind doctor's perspective, who himself had health challenges.

Entertaining, but a little too Gody at times

I have been enjoying the stories here and it's a must for some of you looking for positive stories in a world full of negative ones. I primarily got this book for the medical aspects, but still enjoyed the general positive vibe it portrayed. My only complaint is God and religion were brought up a little too much for liking. Probably not a big deal for those with faith so this maybe a positive for you. For those of you getting this for the medical science aspect you maybe disappointed. I for one think doctors and nurses should get the credit for these miracles and I would of liked to hear more about how they did it.

All that said I'm still happy with this title and enjoyed it.

Not so much. It is good to hear positive stories. It isn't all full blown miracles some stories being the natural happening in a very divine way (ie this person just happened to be there). But there were also some unexplained transitional idea of miracle stories.


I do think it has changed my prayers a little for the sick in that I feel more encourage that one can pray for all the stages of a persons healing to go smooth if they must go through the process.