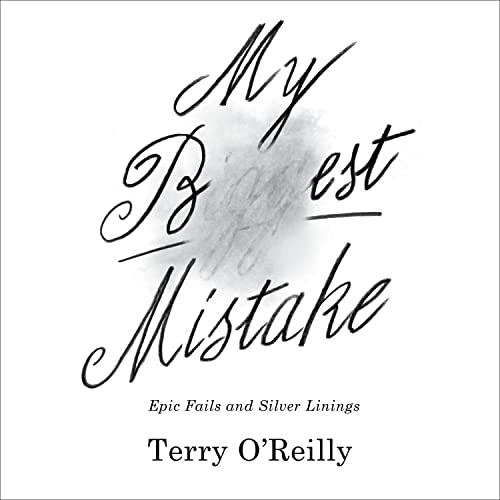 The host of CBC Radio’s Under the Influence, Terry O’Reilly, uncovers the surprising power of screwing up.

The Incredible Hulk was originally supposed to be grey, but a printing glitch led to the superhero’s iconic green color. NHL hall-of-famer Serge Savard’s hockey career nearly ended prematurely, not because of an injury, but because of an oversight. And the invention of a beloved treat, the Popsicle, began with a simple mistake.

In his fascinating and meticulously researched new book, Terry O’Reilly recounts how some of the biggest breakthroughs and best-loved products originated with a mistake. Some people’s “mistakes” led to dramatic life changes - losing their jobs, their companies, and often their credibility - only for them to discover new opportunities on the other shore. Other people’s mistakes seemed minor, almost insignificant - until they led to a famous brand, a legendary band, or a groundbreaking work of art. And in a few instances, a mistake actually saved lives.

The fear of failing often holds us back. My Best Mistake will change how you think about screwing up and will encourage you to accept mistakes and embrace the obstacles that may arise from these errors, leading you to unexpected breakthroughs and silver linings of your own.

What listeners say about My Best Mistake

This is a terrific audiobook read by the book author. If you like O’Reilly’s podcasts and radio shows, then you will love this.

If you're a fan of Terry's podcasts (and spin-off podcast 'We Regret to Inform You"), you'll love My Best Mistake. Well-researched stories told in Terry's classic fun and smart story arc style. I binged it, I love it, and I was totally bummed when it was over. Highly recommended with 5 Stars all the way.

Terry O'Reilly is a great storyteller and narrator. He has another interesting premise with this book. Each chapter features a different person and how they overcame a mistake that might have ruined them. The stories were inspiring and absorbing, even if you've never heard of the person being featured.

Similar to the radio program which makes it great!

Very similar in content to the radio program, but part of the reason that makes this enjoyable. Would defenitely recommend.

I have binge listened to Terry's podcast for many years. I loved listening to this book. the depth of the stories drew you in and kept you there.
loved the history

I absolutely loved this book. I highly recommend it for anyone looking to be entertained and informed!

The stories here are mostly about famous people and companies that most of us would recognize, however we would have no idea what they went through to reach the level of success that they did. So it is very enlightening. The narrator,, the writer himself, made the story even more interesting by the way he was slow and deliberate in his delivery.

The audio version was done very well. I love hearing about how folks got to where they are and, even though they look like superstars in their field, they are really human.
Terry has a voice that is easy to listen to while working or doing other chores. From radio to books to audio books, Terry is a fantastic story teller.
Well worth the investment.
Bruce J

This is an absolutely great audiobook.
Terry O’Reilly continues with his practice of telling an engaging story that lures the listener in and suddenly the listener has learned a lesson. As a bonus some of the stories are heartwarming and most inspirational.
As a performer, he is excellent – not surprising as he has spent much of his fascinating career in radio.
At the risk of making a terrible joke based on the title, it would be a mistake not to listen to this one.

When It's Wrong, It's Right!

Informative and excellent story telling narrated by a fireside voice.

A story grows it's own legend (Brian Williams - newscaster), Rob Lowe's self-deprecating redemption, Anthony Carter's trust in another human, and other stories that spin on a singular facet, and more. Each story is an inspiration in their own unique, yet broadly applicable circumstance.