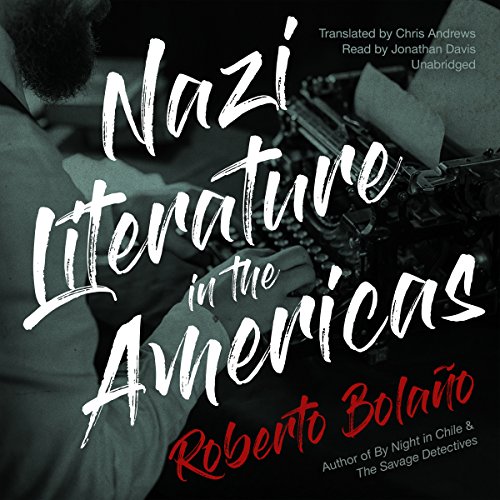 Nazi Literature in the Americas

A tour de force of black humor and imaginary erudition, Nazi Literature in the Americas presents itself as a biographical dictionary of writers who espoused extreme right-wing ideologies in the 20th and 21st centuries.

Comprising short biographies about imaginary writers from Argentina, Brazil, Chile, Cuba, Columbia, Peru, Uruguay, Venezuela, and the United States, Nazi Literature in the Americas includes descriptions of the writers' works, cross-references, a bibliography, and also an "Epilogue for Monsters". All the writers are carefully and credibly situated in real literary worlds. There are 14 thematic sections with titles such as "Forerunners and Figures of the Anti-Enlightenment", "Magicians, Mercenaries, and Miserable Individuals", and "North American Poets".

Brisk and pseudoacademic, Nazi Literature in the Americas delicately balances irony and pathos. Bolaño does not simply use his writers for target practice: he manages to sketch character portraits that are often pathetically funny, sometimes surprisingly moving, and, on occasion, authentically chilling. A remarkably inventive, funny, and disquieting sui generis novel, Nazi Literature in the Americas offers a clear view into the workings of one of the most extraordinarily fecund literary imaginations of our time.

What listeners say about Nazi Literature in the Americas

The most incredible aspect of this fictional history is the fact that much of the artists and works are not always linked directly to nazism. More often it’s a paranoia, a sense of futility, or just outsider status. For example, Edgar Allen Poe’s essay, Philosophy of Furniture, appears on the list at the end of the book. Does that mean that the narrative voice, named Bolaño in the book, qualifies it as an example of American nazism? If so, why? This is a fascinating dive through layers and layers of a profoundly creative mind.

The most Bolaño of all Bolaño

I love all of his work, but this one is one of the most "fun" and structurally interesting than the others, even though it's about, you know, nazis. A strangely enjoyable book, as is all of Bolaño (except The Third Reich).

Not for all tastes or interests

Unless you are very interested or conversant in literary and artsy matters, plus the politics and history of the areas in question, the concept may feel exhausted quite quickly. You can treat this as an anthology and digest it over time because each segment generally stands on its own (with some exceptions).