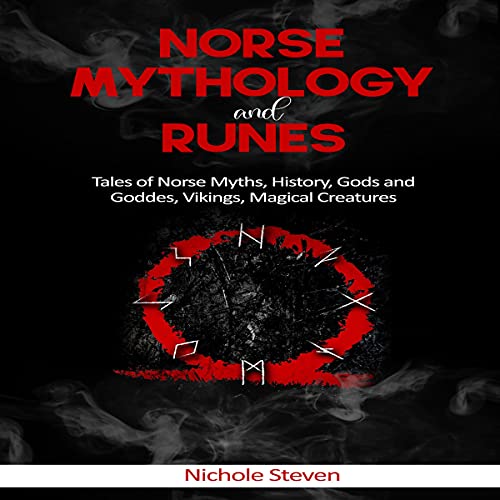 Written by: Nichole Steven
Narrated by: Gareth Richards
Try for $0.00

In Norse Mythology and Runes, this book depicts the main Norse pantheon as follows: Odin, the highest of the mighty, wise, daring, and cunning; Thor, Odin's son, extremely powerful but not the wisest of gods; and Loki, Odin's blood brother and a trickster and unrivalled manipulator.

This book relates the stories in the form of a novelistic arc, beginning with the creation of the mythical nine worlds and progressing through the adventures of deities, dwarfs, and giants. When Thor's hammer is stolen, he must disguise himself as a woman - a difficult task given his beard and voracious appetite - in order to reclaim it. More moving is the story of how the blood of Kvasir, the wisest of gods, is transformed into a mead that infuses drinkers with poetry. Ragnarok, the dusk of the gods and the birth of a new time and people, is the culmination of the job.

What listeners say about Norse Mythology and Runes

I always wanted to learn about Norse mythology but could never find a good enough book or narrator to do so. I saw this book had zero reviews so I was skeptical at first but I decided to buy it anyway considering audibles lax return policy and I am glad I did. The narrator brings the stories to life and they have picked a good selection of them while explaining concepts such as the creation of the world and ragnorock. While it doesn’t contain every myth of the Norse it does give a great intro and fun 5 hours of listening. Definitely would recommend for anyone wanting a fun read or who wants to understand Norse mythology.