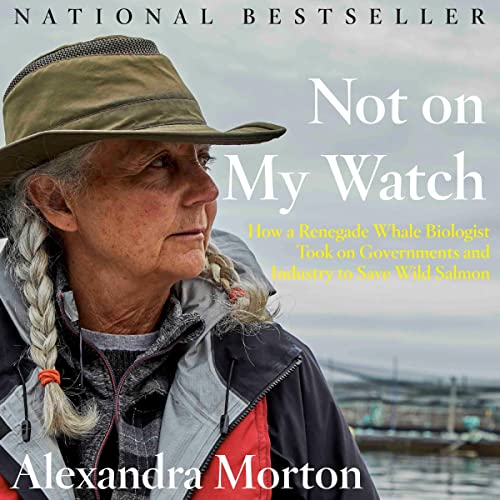 Not on My Watch

Written by: Alexandra Morton
Narrated by: Katie Ryerson
Try for $0.00

Alexandra Morton has been called "the Jane Goodall of Canada" because of her passionate 30-year fight to save British Columbia's wild salmon. Her account of that fight is both inspiring in its own right and a road map of resistance.

Alexandra Morton came north from California in the early 1980s, following her first love - the northern resident orca. In remote Echo Bay, in the Broughton Archipelago, she found the perfect place to settle into all she had ever dreamed of: a lifetime of observing and learning what these big-brained mammals are saying to each other. She was lucky enough to get there just in time to witness a place of true natural abundance and learned how to thrive in the wilderness as a scientist and a single mother.

Then, in 1989, industrial aquaculture moved into the region, chasing the whales away. Her fisherman neighbors asked her if she would write letters on their behalf to government explaining the damage the farms were doing to the fisheries, and one thing led to another. Soon Alex had shifted her scientific focus to documenting the infectious diseases and parasites that pour from the ocean farm pens of Atlantic salmon into the migration routes of wild Pacific salmon, and then to proving their disastrous impact on wild salmon and the entire ecosystem of the coast.

Alex stood against the farms, first representing her community, then alone, and at last as part of an uprising that built around her as ancient Indigenous governance resisted a province and a country that wouldn't obey their own court rulings. She has used her science, many acts of protest and the legal system in her unrelenting efforts to save wild salmon and ultimately the whales - a story that reveals her own doggedness and bravery but also shines a bright light on the ways other humans doggedly resist the truth. Here, she brilliantly calls those humans to account for the sake of us all.

“[O]ne of the most important reads to come out of B.C., if not the country, this year.... It’s a story that’s heartbreaking, infuriating, shocking, suspenseful, and inspiring. And it’s a tale that continues to unfold.” (Stir)

“[Not on My Watch] doesn’t read as an angry polemic. Rather, it’s an outline of a life spent standing up for something.” (Dana Gee, Vancouver Sun)

“Alex Morton’s Not on My Watch, like Silent Spring, should touch off a national debate about rights and obligations, and while we’re at it, about decolonization. If Not on My Watch needs to be peer reviewed, those peers should include ordinary people with a thirst for justice and common sense. And every politician should be judged by their reaction to this book.” (The Tyee)

What listeners say about Not on My Watch

I cannot believe that I haven't heard about A Morton until now! How can such important Canadian news go uncovered? Also, I will NEVER eat farmed salmon again, no matter how "sustainable". What has happened in fish-farming is just disgusting and the government has turned a blind eye so that profits could be made. More of Canada's shameful history revealed.

She writes very matter-of-factly, from the present POV, so I think maybe a lot of the passion, confusion, fear of what she has dedicated her life towards has been lost.

Nevertheless, every Canadian, and everyone who eats salmon should read this book. What a David and Goliath tale of persistence and righteousness. Brava to A Morton!

I am so grateful for all your hard work Alexandra Morton. Thankyou for sharing your story. An amazing read for critical times of wild salmon.

I can honestly say before reading this i knew very little about salmon, salmon farms and the huge effect they have on the environment. After reading, it has changed the way I purchase Salmon and how I view the gov'ts connection with the Department of Fisheries. It's hard to believe that after the collapse of east coast cod stocks that we're nearly there with salmon on the west coast. It's even harder to believe the lengths industry will go to to silence scientific information.

Great story and a true testament that perseverance pays off.

A book that should be read by all Canadians

One of the most gripping, shocking and inspiring books I've read. I had some background on this topic and had no idea the depth of the issue and the politics in fish farming.

I had no idea!

I learned much from this book as it’s contents are compelling, alarming, and appalling. A must-read for all Canadians who are asked to wake up before it is too late. Morton sounds the clarion call. We have been warned. Now do we take action or not?