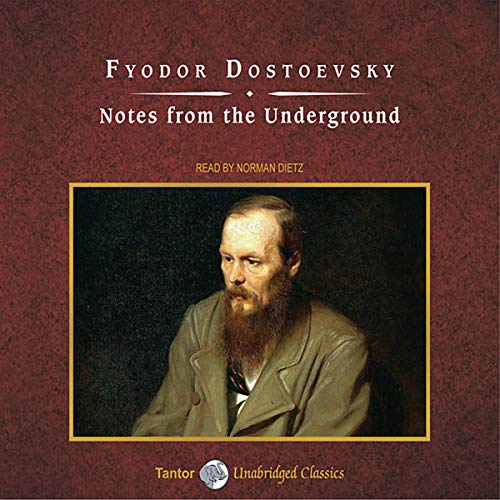 Notes from the Underground

A predecessor to such monumental works as Crime and Punishment and The Brothers Karamazov, Notes from the Underground represents a turning point in Fyodor Dostoevsky's writing toward the more political side. In this work, we follow the unnamed narrator of the story, who, disillusioned by the oppression and corruption of the society in which he lives, withdraws from that society into the underground. This "Underground Man" is one of the first genuine antiheroes in European literature.

The first part of this unusual work is often treated as a philosophical text in its own right; the second part illustrates the theory of the first by means of its own fictional practice. A dark and politically charged novel, Notes from the Underground shows Dostoevsky at his best.

What listeners say about Notes from the Underground

The book begins, "I am a sick man," and we end agreeing. Deep, thought provoking.

an anti-hero story as relevant today as when it was written. a true precursor to modernism and existential ism.

Gross and awful. Don't waste your time.
This book is the Jean-Ralphio wooooooorst.

Read the spark notes instead, ya'll.

For those, who know what is existentialism

If you like philosophy, you will like this book too. There are a lot of thoughts in it. I recommend to read some professional reviews after lissening this book.