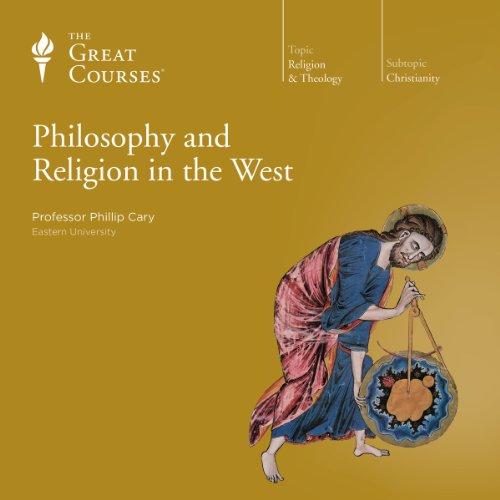 Philosophy and Religion in the West

Professor Cary explores thousands of years of deep reflection and brilliant debate over the nature of God, the human self, and the world in these 32 lectures. It's a debate that serves as a vivid introduction to the rich and complex history shared by the West's central religious and philosophical traditions.

Whether you're a believer, a seeker, or both, you'll find much to spark your deepest ponderings in these talks on the long and rich interplay between faith and reason. You'll join Professor Cary on the fascinating search for answers about the similar questions philosophy and faith ask: What is the ultimate reality? What can we know, or what should we believe about it? To learn how these crucial issues have been discussed over the past three millennia is to enter the core of our intellectual heritage - to find the origin of some of our deepest perplexities and most cherished aspirations. It is a comprehensive journey - intellectually, philosophically, and spiritually - but one which requires no special background. By the end of these lectures, you'll gain a new or sharpened fluency in issues that include the historical interaction between philosophical traditions (such as Platonism) and religious traditions (such as Judaism and Christianity); the synthesis of philosophy and religion that characterized the "classical theism" of the medieval period; the most prominent philosophical criticisms of religion; and the reasons why many religious thinkers of the 20th century are suspicious of the alliances between philosophy and religion.

What listeners say about Philosophy and Religion in the West

This is what I was looking for when I took a philosophy course in University 30 years ago. Better late than never; thank you for such an accurate and succinct romp through Western Philosophy.

How Religion and Philosophy Impact Each Other

Years ago I had the privilege of listening to Prof. Cary speak on Luther and Calvin in regards to the sacraments and salvation. I've been a fan of his ever since. These lectures will make a fan of you also. As a Lutheran pastor I have given a lot of time to the study of both philosophy and religion. I've read Copleston and T.W. Jones on the history of philosophy, as well as diving into original sources. I have spent a good deal of time reading about other religions as well. Yet, I have found few who are able to deliver the content Cary does as clearly and concisely as he does. I mean his study and personal grasp of the subject matter is evident in every lesson, and point. Seriously, if you teach philosophy or religion in any capacity you do yourself a favor to give this lecture series a listen. If you are interested in this subject you will find nothing better that I know of.
This series will better help any listener understand why they personally think the way they do, it will also challenge them to understand why others think the way they think. This will be true of Christians, atheists, Jews and Muslims. Cary, a man of strong convictions himself, is refreshingly respectful of all the positions he covers, whether or not he agrees with them. He is also forthcoming with his own biases.
Cary does buy into "The New Perspective on Paul" as introduced by Sanders and made popular with N.T. Wright. I myself think that this position is a bit flawed. He discuses this position in relation to the Christian concept of legalism and Augustine. Yet, despite this disagreement I find myself compelled to take Cary's advice at the beginning of the lecture series and listen to this one again. I did find his presentation of this position to be the clearest one I've come across. And I'm sure listening to the series as second time will be even more rewarding than it was the first time through. I am also looking forward to listening to his other lecture series.
Cary has a particular gift of exposing how theology and philosophy have impacted each other over the years, and how these developments have changed Islam, Judaism and Christianity over the years, and in turn how these religions have also had impact on philosophy.

I am assuming the listener has a pretty good attention span and pretty good patience with walking through a lot of moderately abstract words and ideas. The person who would not like this is one who would quickly start rolling eyes and glazing over at any description of the details of religious doctrine. I love this lecture set. From days of sitting in Episcopal church as a little boy, I have always scratched my head at its odd (to my boy self) utterances, such as the Nicene Creed. Hey WHAT?! As a little boy with a hunger for vocabulary, I had a hunger to grab those words and phrases and follow them like strings back to whoever and wherever they came from. What does that MEAN? What did those people THINK? How did my "ordinary" neighbors and family members come to reel off all this jargon with apparently little deep understanding of it? How could they say they base their lives on that? As with political matters (where I read just today some impassioned, blustery comment on the Constitution's 14th Amendment, of which the writer was clearly utterly clueless), I have had the same feeling with almost all religious remarks and assertions I hear. How could people seem so ignorant and yet be hurling this stuff at each other and fighting about it? In other words, I am a scholar by temperament. I HAVE to dig into this stuff. And here, I am mightily rewarded. I am swimming in this stuff. And the presentation is ideal. This is as listenable as I could imagine this topic being. As I strive to do as a professor, this professor uses the most clear, plain examples possible to open our minds' eyes to some pretty fancy ideas. This is first-rate. Not only Plato and Aristotle, but inquiring minds might want to know, who was Plotinus? Philo of Alexandria? Maimonedes? Augustine? On and on.

Some Corrections Regarding the Jewish Tradition

Professor Cary mentions the Oven of Aknai story in his discussion of rabbinic Judaism in which Rabbi Eliezer gets God himself to declare that he is right. It is Rabbi Joshua ben Karha, not Rabbi Judah, who argues that the Torah is not in heaven and that, therefore, the rabbis are able to overrule even God himself. On a more serious note, Professor Cary argues that the rationalistic tradition died out after Maimonides in the 13th century. I understand that for the sake of time it makes sense not to get bogged down into late medieval Jewish philosophy and thinkers like Hasdai Crescas and Isaac Abarbanel, but to claim that such a tradition did not exist is false. Yes, the medieval Jewish philosophical tradition lost out to Kabbalah, but that is a complicated story that played out over several centuries. Kabbalah's victory had far more to do with historical circumstances like the expulsion of 1492 and the fact that its debt to non-Jewish sources was less obvious than to anything intrinsic to Judaism.

this is my 3rd time listening to this and it's a great refresher. always gets to the heart of the matter.

Philip Cary does an impressive job waking through Christian, Jewish, and Islamic history (it seems more could have been covered on Islam). I highly recommend this course to anyone interested in keeping up with religious philosophical conversation today.

Impact of the interaction between the two

Phillip Cary was the professor in my favorite Great Courses course, The History of Christian Theology. He is a professor at Eastern University. Philosophy and Religion in the West was nearly as good.

This is a western history of philosophy. I would also like to see an eastern version, but I do not think that exists from Great Courses right now.

The course opens with Plato and Socrates before moving into Jewish and Christian philosophy. Because I have been intentionally trying to work on developing my philosophy background, there were things here that were both repetitive from other Great Courses or reading, but also a number of areas where something finally clicked for me.

The largest overlap in content was the end of this course and the Modern Philosophy course that I listened to earlier this year. This course was particularly focused on religion and philosophy so did not have the breadth of the previous course, but taking a second round within a couple months of the earlier course was helpful.

I also just happened to listen to a podcast interview with Alvin Plantinga, who was mentioned toward the end of the course, which was helpful as well.

Overall, I still feel like I have a long way to go before I really get a basic grasp on philosophy, but this was a good course that was able to add to my understanding of theological develop as philosophical development in the West.

The material was very in depth. The professor covered a massive amount of material in an interesting way.

The content and presentation of the course was excellent. Perhaps he should have spent a small amount of time on liberation and third world Christian theologies and philosophies.

I’m almost three hours in and there has been nothing useful, challenging, and <2.5% new information. This is mostly a vague equivocation with an obvious theological bias. This would appeal to someone who is already religious and even then would probably be very boring and unchallenging. Maybe a random irrelevant Christian pastor could find something useful here?

Amazing and so beautifully structured.

This lecturer has very rare skill to powerfully and simply explain very complex topics. I swallowed this course in several days and I only regret that Phillip Cary doesnt have something not for 16, but for 50 hours.