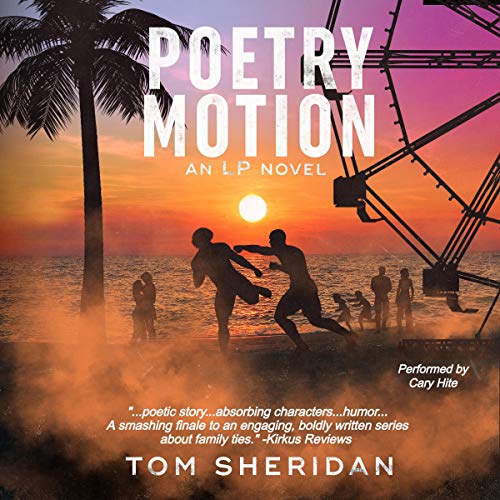 Written by: Tom Sheridan
Narrated by: Cary Hite
Try for $0.00

Franco’s last fight. Forever. One last chance to set an example for his kids. Either fight until the clock is out. Or get knocked the f*** out. One last chance to be there for his best friend Joey. The duo on a cross-country road trip with kickboxer Khloei. A knockout with knockout power. And an affinity for Franco. The married driver at the helm goin psycho. Headed west for a final fight. And. To take someone’s life. His son’s attacker out on early release. Franco carryin a piece.

The Frog’s old gun. Franco’s father figure wouldn’t be needin it anyway. Laid up in the hospital fadin away. His gums flappin away. Revealing past sins. Revealing orphan Franco’s origin.

Franco. Just trying to keep his head. Make a last fight. Where it might...get knocked off anyway. By the biggest star in MMA. “Lightning in a Cage” Lenny Carrera. The electric champ ready to put the final stamp on Franco’s career. Knock him out once and for all in front of his whole family.

Including T. The young rapper both a son to Franco and a friend to Lenny. And dealing with his own fight altogether. His LA label labeling him as an irreverent rapper. And now asking him to sing a song...just flat out wrong. Puttin T to a decision to sell out or walk out. Stick with his A&R lady Sadie or drag his boy Dragon out west. Lay down their musical best. Figure out the rest.

T a rundown mess. And without Kamara. His bae. Months gone from LA. On a research trip. Distancing their relationship.

"Sheridan once again skillfully showcases his "lyrical prose," in which narrative descriptions occasionally boast vibrant rhymes and/or wordplay. Franco, for example, had "an angry young man past where he was more goodfella than good fella." But the poetic story also involves thoroughly absorbing characters. Enhancing the protagonists' main objectives are smaller dilemmas: TJ and Linc are pals; Franco finds himself attracted to Joey's assistant coach, Khloei, while the competitor's wife, Julie, is back home in New Jersey. Notwithstanding the serious drama, this bracing tale has a superb, consistent sense of humor, particularly in the footnotes that are more wisecracking than informational. A smashing finale to an engaging, boldly written series about family ties." (Kirkus Reviews)

What listeners say about Poetry Motion: An LP Novel

This last book, in a series of three, was my favorite. It was a great finale to a coming of age for a father and son. It kept your attention as both respond to their life challenges. Definitely a blue ribbon finish!