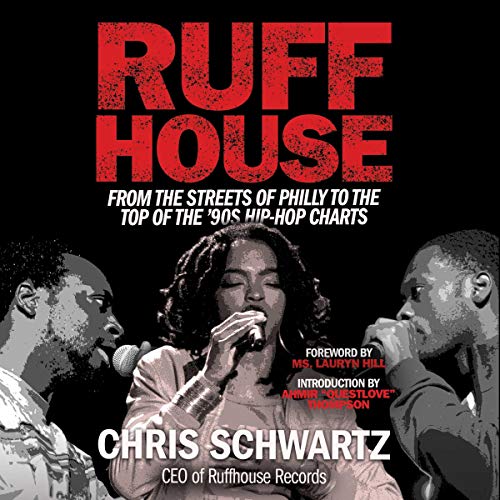 How Ruffhouse Records founder Chris Schwartz overcame poverty, abuse, and addiction to start one of the most pivotal labels in hip-hop history and launch the careers of some of music's biggest stars

"All respect to Chris Schwartz. He is a great visionary." --Nas

As a struggling musician trying to catch a break in 1980s Philadelphia, Chris Schwartz navigated the crime-infested, morally bankrupt music industry to found and build one of the most successful hip-hop record labels in the world. That label was Ruffhouse, which launched the careers of Nas, The Fugees, Cypress Hill, and others, dominating the charts and generating global revenues of over one billion dollars.

Schwartz and his partner, Joe Nicolo, built Ruffhouse from one desk and a phone to one of hip-hop's most revered record companies while simultaneously struggling with drug addiction and alcoholism. A story of money, greed, envy, betrayal, violence, addiction, loss, and redemption, not to mention a whole lot of music, Ruffhouse reveals the inside story of the record companies, recording studios, tour buses, private jets, mansions, radio stations, and concert halls at the height of hip-hop's 1990s heyday, while also uncovering the darker side of the business, from police stations to rehab clinics, courtrooms to prisons. Narrated in Schwartz's own candid, searing prose, Ruffhouse is a gripping portrayal of hip-hop culture at its tipping point, as it transitioned from urban curiosity to a global commercial platform.

What listeners say about Ruffhouse

I enjoyed the Author's intense testimony about Haiti and so muh more in the book. It's very explosive!

I never knew the back story of the Fugees record label. Very interesting read.

came in with no expectations, based on a tweet recommendation from Mr. Chuck D. incredible story and inspiring. learned alot!

l had some parallels with him. Don't know how he survived such a horrific childhood.

good story and a great read

It's nice to get a different perspective. I enjoyed hearing about the music business from the inside.

Cool interesting read , could of extended the story further along. It ends in the early 2000’s.

Thank you Chris for sharing your amazing & inspiring story. I wish & yours continued Blessings & success

Chris Schwartz illustrates the development of RuffHouse Records during the Golden Ages of commercial Hip-Hop Music in the United States of America. It illustrates his acute ability to leverage his entrepreneur interest in music by fostering strategic alliances in the Music Industry to later becoming the number one Record Label in the world. Timur A. Davis, Librarian