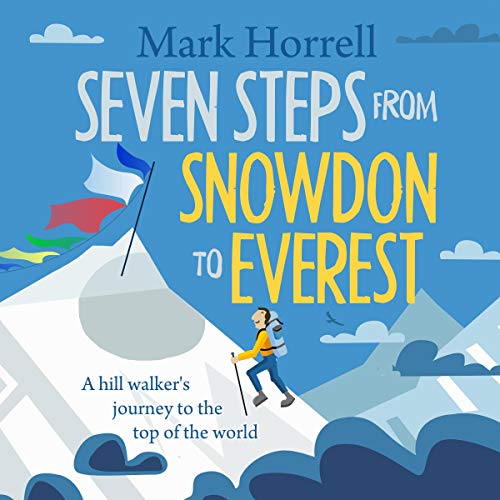 Seven Steps from Snowdon to Everest

Written by: Mark Horrell
Narrated by: Philip Battley
Try for $0.00

As he teetered on a narrow rock ledge, a yak's bellow short of the stratosphere, with a rubber mask strapped to his face, a pair of mittens the size of a sea lion's flippers, and a drop of two kilometres below him, it's fair to say Mark Horrell wasn't entirely happy with the situation he found himself in.

He had been an ordinary hiker who had only read books about mountaineering. When he signed up for an organized trek in Nepal with a group of elderly ladies, little did he know that ten years later he would be attempting to climb the world's highest mountain.

But as he traveled across the Himalayas, Andes, Alps, and East Africa, following in the footsteps of the pioneers, he dreamed up a seven-point plan to gain the skills and experience which could turn a wild idea into reality.

Funny, incisive, and heartfelt, his journey provides a refreshingly honest portrait of the joys and torments of a modern-day Everest climber.

What listeners say about Seven Steps from Snowdon to Everest

Great sense of humor and appreciate the realism vs sensationalism often seen in books that include Everest. Really interesting perspective on the journey from hiking to climbing.

Great perspective on big mountains from an amateur

Very funny, and extremely helpful for anyone considering hiigh altitude trips or making a change in their lives.