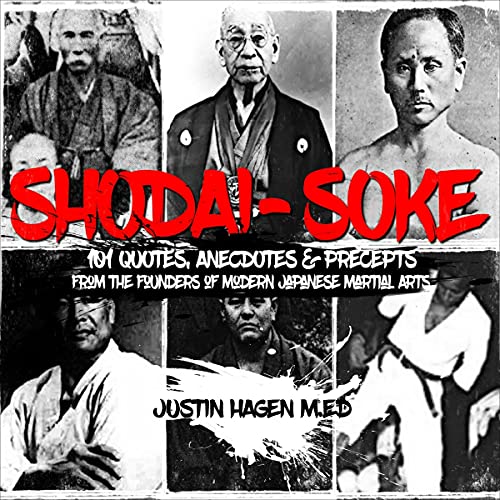 From ancient times to the modern era, martial arts has consistently evolved over the centuries and continues to evolve and thrive today. At the turn of the 20th century, martial arts saw perhaps its greatest evolution as many Japanese and Okinawan martial arts masters of the time no longer looked at martial arts as a mere tool of warfare, but instead as systems that have immeasurable mental and physical health benefits. While the popularization of MMA continues to showcase and demonstrate the formidable physical aspects of martial arts, many have lost sight of the philosophical components martial arts has to offer.

In an attempt to revive the philosophical components of traditional martial arts, included within this work are short biographies, quotes, anecdotes, and precepts as well as a list of additional books and writings from: Anko Itosu (Itosu-Ryu), Jigoro Kano (Judo), Gichin Funakoshi (Shotokan), Morihei Ueshiba (Aikido), Chibana Chosin (Shorin-Ryu), Chojun Miyagi (Goju-Ryu), Kenwa Mabuni (Shito-Ryu), Choki Motobu (Motobu-Ryu), Tatsuo Shimabuku (Isshin-Ryu) & Mas Oyama (Kyokushin). As many of these traditional styles are still practiced today and have given rise to even newer forms of martial arts since, it is important to look back at some of the most notable philosophies from the Shodai-Soke (founders) of these traditional martial arts styles so that we can understand the true meaning of these arts as not just tools for self-defense, but also as tools for self-development.

Through the inclusion of lists of writings and books from each Shodai-Soke, I hope to encourage others to seek out and read/listen to these books for further personal development.

What listeners say about Shodai-Soke