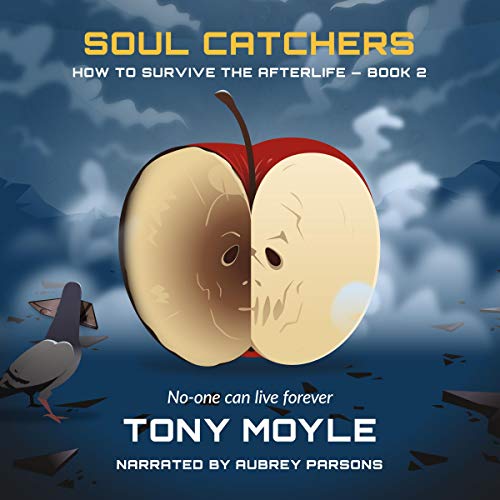 Written by: Tony Moyle
Narrated by: Aubrey Parsons
Try for $0.00

As the demons gather to debate John’s disappearance the scattered parts of his soul plan revenge on those responsible. All that stands between him and success is his newly acquired Tourette’s Syndrome and an increasing list of pursuers. Demons, Satan, shadow souls and a gang of deceased murderous dictators all want a piece of him. Fortunately there’s plenty to go around.

Meanwhile the pigeon, Sandy Logan, contemplates his unfulfilled ambitions. What if he ruled Hell? All he needs is an army and a plan to spark revolution. While the demons are distracted, his dysfunctional mob will attempt to pull off one of the greatest heists in the Universe.

Young fingers trace the letters on a cold black stone. They find a J, O, H, and finally, N. It’s the grave of a man whose image has been imprinted on David’s mind his whole life. Yet the name is the second most interesting thing about it. Mysteriously chiseled on the back of the headstone are the words, "God Protects the King".

Sequel to The Limpet Syndrome, Soul Catchers is book 2 of How to Survive the Afterlife the funny fantasy series by Tony Moyle. If you love books that challenge your belief systems about feline astronauts, demons made of dark matter (possibly!), high speed tractors, the meaning of life (and death) and talking pigeons then this is the book for you. OK you've never heard a book like that before...here's your chance!

Pick up the weirdness today!

What listeners say about Soul Catchers

A sequel to rival the first book

Can't wait for the next one! Very Meta fun and reader does a great job.