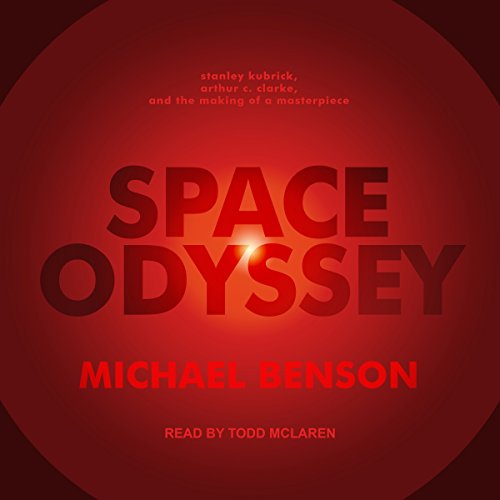 Written by: Michael Benson
Narrated by: Todd McLaren
Try for $0.00

Regarded as a masterpiece today, 2001: A Space Odyssey received mixed reviews on its 1968 release. Despite the success of Dr. Strangelove, director Stanley Kubrick wasn't yet recognized as a great filmmaker, and 2001 was radically innovative, with little dialogue and no strong central character. Although some leading critics slammed the film as incomprehensible and self-indulgent, the public lined up to see it. 2001's resounding commercial success launched the genre of big-budget science fiction spectaculars. Such directors as George Lucas, Steven Spielberg, Ridley Scott, and James Cameron have acknowledged its profound influence.

Author Michael Benson explains how 2001 was made, telling the story primarily through the two people most responsible for the film, Kubrick and science fiction legend Arthur C. Clarke. Benson interviewed Clarke many times, and has also spoken at length with Kubrick's widow, Christiane; with visual effects supervisor Doug Trumbull; with Dan Richter, who played 2001's leading man-ape; and many others.

"A fascinating, detail-rich account of the long slog to make the science-fiction masterpiece 2001: A Space Odyssey." (Kirkus)

What listeners say about Space Odyssey

One of the most comprehensive account to the genius of Kubericks stand alone masterpiece , 2001 Space Odussey.A Must read , an absolutely credible and detailed account of this Magic of Movie Making.

More of a behind the scenes book than the novelization of the film, which is what I was hoping for.

A Book Wholly Equal to its Subject

I thought about demeriting this book one full star for committing the discourtesy of ending. I still may.

Younger people have little idea how impactful the film 2001: A Space Odyssey was when it first came out. It inspired a whole generation of filmmakers, including major names like Steven Spielberg, George Lucas and James Cameron. The film is visually sumptuous, employing cutting edge special effects, many of which were pioneered by Stanley Kubrick and his team. This book is a wonderful romp through the making of the epic, revolutionary film. It provides so much wonderful detail about Kubrick's obsessiveness, his attention to factual detail and his often-times tyrannical style of directing. I loved every second of it, and went back right after finishing it to watch the film again. Doing so right after reading the book opened my eyes to many details I had missed the first (and second and third) time around watching it. I confess I even learned a lot more about the plot, which was very confusing to me at times. It's an excellent summer read.

This was a wonderful, comprehensive overview of the making of one of my favorite films. Although I've read extensively on Kubrick and the making of this movie, I still learned a lot here.

With that said, I didn't enjoy the narration. While a competent reader in most regards, Todd McLaren makes the bizarre and irritating choice to voice Kubrick's wife with a stereotypical German accent. If this happened once or twice, I could overlook it. But she appears consistently throughout the book, so the "Hogan's Hero" voice is unwelcome and distracting each time it appears. This might be acceptable if she were a character in a novel and her dialogue was spelled this way phonetically, but her words aren't written with a German accent in the book, so why pronounce it that way just because she's German in real-life? It's distracting and silly.

My appreciation for the film 2001 A Space Odyssey has only grown over the years. This book has actually increased that appreciation immensely. I had no idea of the extremes, expenses and innovations that went into filming even short sequences, many of which were discarded as being sub par. Watching this movie now blows my mind on a whole new level.

narrator’s accents are offensive and distracting

Over the top accents have no place in a non-fiction book. I cant even get through this.

Tells you everything you want to know about...

... the making of 2001. It's not my favorite movie (confession: I've never been able to watch it in its entirety), so it was, for me, too much information. But if you loved 2001, this is probably a must listen. It should answer every question you have about the movie. I had a huge problem with the narrator doing dialects. Even if they were good, which they are not (his Carl Sagan sounds nothing like him and I have no idea what his accent for Kubrick's German wife sounded like), it was unnecessary. The narrator should never call attention to himself and by doing accents, he does exactly that. Had he not done so, I'd have given his performance 5 stars.

Very informative book containing tons of details not found in other works on this subject.

fascinating journey through the creation of a masterpiece

for any cinefile let alone a fan of Kubrick and this movie, this is an exceptionally well told tale of the epic journey to create one of the great films of all time. it is such a compelling story filled with endless “wow” moments that I found myself compelled to listen any moment I could get. can’t wait to see the film again now that I know the true story of how it was made.

#celebrity #film #london A 'making of' focusing mainly on Arthur C Clarke (roughly 20%) and Stanley Kubrick (~80%). Some of the lengthy technical descriptions about how shots were achieved did not translate well to audio as it was too difficult to picture in my mind, I expect this will be different for different readers. Despite this problem there was enough fascinating insight into both of these men to keep the story interesting. #tagsgiving #sweepstakes

Well read by narrator and a great in depth and thorough exploration of one of the all time most influential movies. This book provides massive amounts of detailed insight and information. The narrator, Todd McLaren does and excellent job of bringing the text to life. If you’re looking for the best and most informative telling of what took place to bring one of the best movies of all time to the screen, this is it!