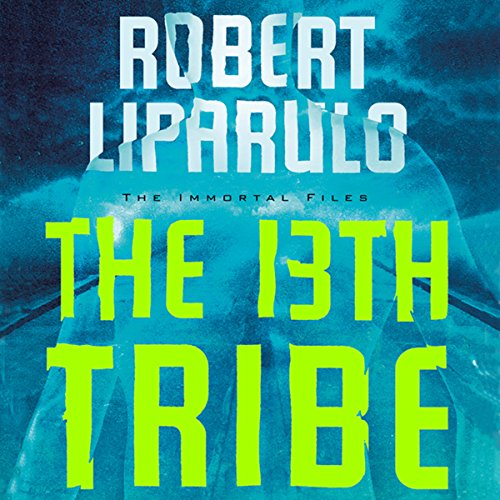 Written by: Robert Liparulo
Narrated by: Daniel Butler
Try for $0.00

Immortal vigilantes from the time of Moses have planned the unthinkable. But how can you stop what you can’t see? The battle didn’t start this year...or even this millennium.

It began when Moses was on Mt. Sinai. Tired of waiting on the One True God, the twelve tribes of Israel began worshipping a golden calf through pagan revelry. Many received immediate death for their idolatry, but 40 were handed a far worse punishment - endless life on earth with no chance to see the face of God.

This group of immortals became the 13th Tribe, and they’ve been trying to earn their way into heaven ever since - by killing sinners. Though their logic is twisted, their brilliance is undeniable. Their wrath is unstoppable. And the technology they possess is beyond anything mere humans could imagine.

Jagger Baird knows nothing about the Tribe when he’s hired as head of security for an archaeological dig on Mt. Sinai. The former army ranger is still reeling from an accident that claimed the life of his best friend, his arm, and his faith in God.

The Tribe is poised to execute their most ambitious attack ever and the lives of millions hang in the balance. When Jagger’s wife and son are caught in the crossfire, he’ll stop at nothing to save them. But how can one man stand against an entire tribe of immortals?

"Liparulo plunges deep into the pages of Scripture to find intriguing what-if’s and stunning revelations—all woven into a tale that is both skin-tinglingly supernatural and thought-provokingly real. Packed with high-tech gadgetry, action, and heart . . . Read this novel! Seriously!” ("Ted Dekker, New York Times best-selling author of Forbidden and the Circle Series)

What listeners say about The 13th Tribe

Would you listen to The 13th Tribe again? Why?

Yes,because it's good with no foul language.

Somewhat, not konwing what was next.

What does Daniel Butler bring to the story that you wouldn’t experience if you just read the book?

Everything becaue I dont like nor have time to read.

If you could rename The 13th Tribe, what would you call it?

This book would fit into the Marvel series.

this book would fit into the Marvel series. A group of people from the early days of christ are cursed to live on this planet till god forgives them and brings them home

Starts Off Slow But Stay With It

What did you love best about The 13th Tribe?

I felt bored and was close to returning the book after the first 4-5 hours but that last 10 hours picks up and runs.

What other book might you compare The 13th Tribe to and why?

The Left Behind Series. VERY similar in tempo and content but I like the that this took a less political approach and stayed on the mystery side of things more.

Which character – as performed by Daniel Butler – was your favorite?

Owen or Jagger were my favorite characters. Owen was very complex.

What made the experience of listening to The 13th Tribe the most enjoyable?

Giving a "voice" to each character helps to make it real.

It was a bit slow in the beginning, but I realize Robert Liparulo was building the story. Once it got started, it was fast paced and exciting. It had lots of twists and turns.

Oh yes ... Audible needs to offer us the sequel!

This action-packed fiction audio book made the time and labor of my weekend carpentry project zip by. The book was enjoyable and educational about Biblical history and science fiction too. Highly recommended time spent listening, learning, gaining new perspective while working. 5 stars.

I loved the concept!

Well carried out story. I will be moving right to the next book in the series.

This is worth it, you won't regret it!

What did you love best about The 13th Tribe?

This book it like tossing Highlander, the Ten Commandments, and a small bit from a vampire movie into one.

Yes, and I was surprised at the ending not what I expected to happen.

His voice for Jagged was a little on the rough, gruff side but maybe that was what he was aiming for.

If you could take any character from The 13th Tribe out to dinner, who would it be and why?

Owen...listen to the book and find out I don't want to spoil it for you.