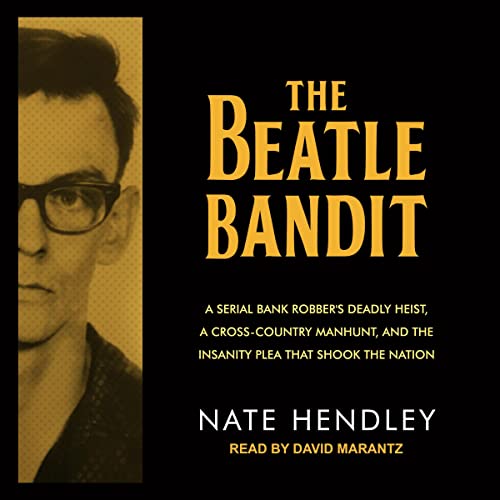 Written by: Nate Hendley
Narrated by: David Marantz
Try for $0.00

The sensational true story of how a bank robber killed a man in a wild shootout, sparking a national debate around gun control and the death penalty.

On July 24, 1964, 24-year-old Matthew Kerry Smith disguised himself with a mask and a Beatle wig, hoisted a semi-automatic rifle, then held up a bank in North York, Ontario.

The intelligent but troubled son of a businessman and mentally ill mother, Smith was a navy veteran with a young Indigenous wife and a hazy plan for violent revolution.

Outside the bank, Smith was confronted by Jack Blanc, a former member of the Canadian and Israeli armies, who brandished a revolver. During a wild shootout, Blanc was killed, and Smith escaped - only to become the object of the largest manhunt in the history of the Metropolitan Toronto Police Force.

Dubbed "The Beatle Bandit," Smith was eventually captured, tried, and sentenced to hang. His murderous rampage had tragic consequences for multiple families and fueled a national debate about the death penalty, gun control, and the insanity defense.

What listeners say about The Beatle Bandit