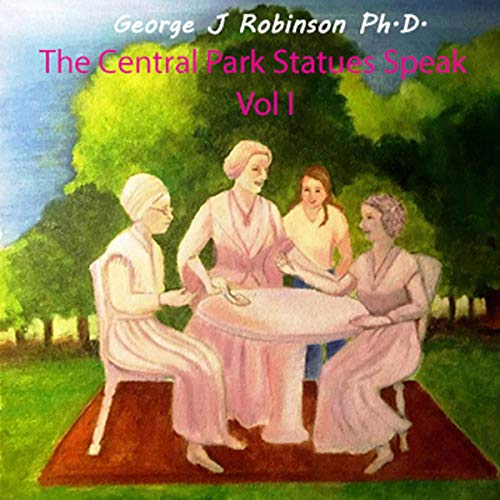 On average, 35 million people visit Central Park each year. Many pass by the statues, plaques, and benches and wonder who those people were. They read the plaques, but there is more to the stories than just what the plaques state.

I created this historical fiction series so that listeners could learn the compelling life stories of these honorees. Like Alexa or Siri, or a historical re-enactor, the statues recall their contributions to society lest we forget.

In volume one, four high school students converse with and confront AI- and IT-enabled Central Park statues about their past. The students question Balto as to why there is a statue of him, and Togo, the true hero of the Race of Mercy, doesn’t. Robbie Burns and Sir Thomas Moore are asked to explain why, if they were such good writers, did they die penniless. The teenagers listen to Fitz-Greene Halleck lament that he is the least known of the statues in Central Park. Shakespeare must defend the authorship of his plays and poems. Finally, the researchers probe Sojourner Truth about her uneasy relationship with the suffragettes.

In this nine-volume series, a total of 31 statues, five benches, three plaques, two tree markers, two fountains, one stone mosaic, and one obelisk are interviewed by the teenage researchers. Enjoy listening to their stories.

What listeners say about The Central Park Statues Speak: Vol I

Walking & talking to statues in the park one day

We used to travel to and walk and play in Central Park. George J Robinson's story pleasantly brought us back there. My kids just like one of the characters enjoyed listening and didn't realize they too were learning while the statues were entertaining us with stories of their true history. Listening was just as as good as being there again, well very close anyway, especially how the narrators Glen Russo and Brianne Vega voiced the statues and brought them all to life. What a nice story in a time when we can all use one.