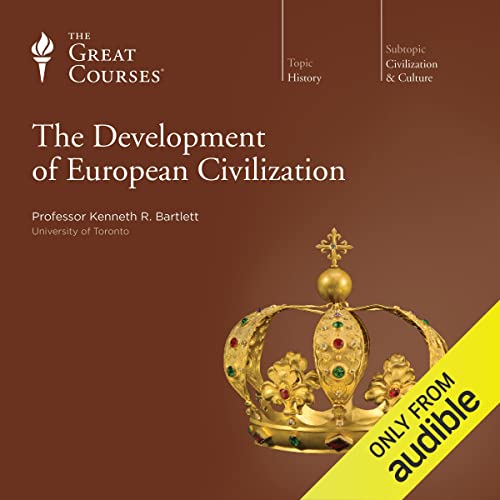 The Development of European Civilization

In almost every way that matters, historical Europe was the laboratory in which the world you now live in was conceived and tested. And you'll be living with the consequences for the rest of your life. These 48 lectures lead you through the doors of that laboratory and guide you through the development of Europe from the late Middle Ages through the eve of World War II.

As you follow Professor Bartlett through the dramatic story of European history, you'll learn about the major ideologies and "isms" that bubbled forth from Europe's constantly fermenting cauldron of debate and conflict, including absolutism, scientism, rationalism, capitalism, nationalism, liberalism, and totalitarianism. You'll investigate the forces that intermingled to create the Industrial Revolution and the accompanying economic and social upheavals that would, in turn, create so many more. You'll also make sense of the European ideologies of government, including the rule of law, the concept of "the consent of the governed," taxation, an independent judiciary, and other concepts. You'll explore the new roles for religion in European life, from the end of the traditional union of altar and throne to great upheavals such as the Protestant Reformation and the Great Schism. And you'll witness the evolution of the European class system, which influenced the social forces that swirled around it just as much as it was influenced by them.

Rather than offering a laundry list of dates, events, and famous individuals, Professor Bartlett leaves you instead with an understanding of historical and social causality. More important: He offers you the chance to experience Europe's development from a European perspective.

What listeners say about The Development of European Civilization

This audio is clear and easy to listen to. The history is laid out chronologically very well. It amazes me how many cycles I could pick out that are repeating themselves. Excellent audio. I learned a TON.

I am was not too sure at the beginning (first 2 hours or so), but it ended up being a great course.
Great content, great course structure and well presented.

The author spends an entire book to explain the conflicts between Europeans and closes off with the African and Muslim invasion is good for Europe.

The Development of Some European Civilizarion

A fine job with the dominant European cultures, such as Britain, France, and Germany, with less emphasis on the other European states.

I loved this course! I used it for studying for my AP European History class, and it was insanely helpful.

The lecturer knows his subject and speaks comfortably. I knew very little about European history before listening, but feel I could contribute to an intelligent conversation now. I like how he explained the circumstances on how specific wars started-- from early history to both world wars. Especially eye opening was how Darwinism, Marxism, and other European philosophers of pre World War I shaped thought of the day that set the stage for both WWI and WWII. He made the topics flow naturally into on another, to show how Europe has evolved.

I have read and listened to many history books. This was easily one of the best.

The lecturer is knowledgeable and passionate. His narration was enjoyable. Even though there was a lot of detail, I was never bored during the 24 hours and 32 minutes.

More importantly, I learned a lot. Professor Bartlett provides context and a unique point of view as he explains not only the historical events, but how the mindset and knowledge of the Europeans evolved across the past few centuries.

It's really an amazing feat to condense so much history and so much knowledge in only 24 hours. I highly recommend this book.

I find it interesting that he hardly and perhaps never talks about the freedom of religion. He puts a strong emphasis, especially toward the end, on the freedom of speech. He clearly has a bias against biblical Christianity as can be seen by his phrase Christian exclusivity. When he talks about religion in his lectures it is mostly in a negative way, where those in positions of religious authority, are using their position merely for the sake of power over others. He is missing a very valuable aspect of religion, and especially Christianity, when it comes to how society after society has benefited. I recommend the book How Christianity Changed the World by Alvin Schmidt. He also has a faulty understanding of Charles Darwin. Darwin did believe in the superiority of certain races over others and therefore was responsible for the experiment social Darwinism found in places such as Nazi Germany and the Soviet Union and the eugenics movement throughout the western hemisphere including the United States.

Professor Bartlett organized his course around the religious, social and scientific beliefs and theories that emerged and morphed during the long period under review. The emerging value systems challenged the orthodoxy of the time and explain the conflicts and insurrections that mark Europe's history and justify its characterization as "the dangerous continent."
Professor Bartlett's lectures were well organized and well-delivered with occasional snippets of wry humor. A very competent treatment of the subject matter!

Very detailed but a little boring to listen to

Excellent, detailed book but maybe better read than listened to, I found myself tuning out at times as although I was interested in the content it wasn't always exciting or engaging.

Would you ever listen to anything by The Great Courses again?

What didn’t you like about Professor Kenneth R. Bartlett’s performance?

He is idiotic to the point of distraction. He should read a book now out of print by Rudolf Flesch called How to Be Brief.

I couldn't listen long enough to find them.

What did you love best about The Development of European Civilization?

Have you listened to any of Professor Kenneth R. Bartlett’s other performances before? How does this one compare?

This is wonderful and is a perfect recap. I wish everyone had listened to this.