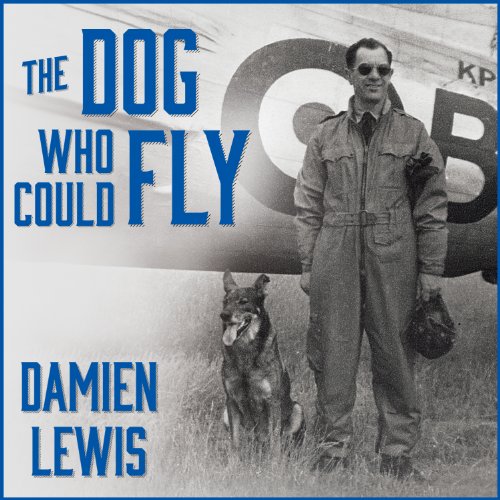 The Dog Who Could Fly

Written by: Damien Lewis
Narrated by: Derek Perkins
Try for $0.00

An instant hit in the UK, this is the true account of a German shepherd who was adopted by the Royal Air Force during World War II, joined in flight missions, and survived everything from crash-landings to parachute bailouts - ultimately saving the life of his owner and dearest friend. In the winter of 1939 in the cold snow of no-man's-land, two loners met and began an extraordinary journey that would turn them into lifelong friends. One was an orphaned puppy, abandoned by his owners as they fled Nazi forces. The other was a different kind of lost soul - a Czech airman bound for the Royal Air Force and the country that he would come to call home.

Airman Robert Bozdech stumbled across the tiny German shepherd - whom he named Ant - after being shot down on a daring mission over enemy lines. Unable to desert his charge, Robert hid Ant inside his jacket as he escaped. In the months that followed, the pair would save each other's lives countless times as they flew together with Bomber Command. And though Ant was eventually grounded due to injury, he refused to abandon his duty, waiting patiently beside the runway for his master's return from every sortie, and refusing food and sleep until they were reunited. By the end of the war Robert and Ant had become British war heroes, and Ant was justly awarded the Dickin Medal, the "Animal VC".

What listeners say about The Dog Who Could Fly

Superb narration by Derek Perkins. A five-star performance! The narration improved on the story, I believe, which is saying something. His voice is easy on the ears and distinctly different for dog and man.

This biographical account is based on personal diaries, BBC footage and reports, and military documents.

The "story" begins in France late in 1939, when native Czech Airman (bomber) Robert Bozdech is shot down in France, over enemy lines. Hiding out with his wounded pilot in an abandoned farmhouse, he discovers a starving newborn German Shepherd, whom he names Ant / Antis. Unable to abandon the puppy to certain death, he hides Ant inside his jacket and crawls through thick snow across "no man's land" -- bombs dropping from both sides, narrowly missing Robert, Ant, and his pilot Pierre. Within fewer than 24 hours, the young warrior pup is already defending Robert and Pierre.

In the months and years that followed Antis would save lives several times. This decorated dog rescued civilians buried under rubble in shell-shocked, battle-worn Britain, alerted men and women of incoming attacks at various Royal Air Force bases, and flew alongside his best friend in Wellington fighter planes.

This account focuses more on the tight bond between dog and man, less on the war itself. Still, there are some interesting war nuggets: Hitler's Czech invasion, Czech airmen joining the French Air Force to fight Nazis, France falling to Hitler, French and Czech soldiers fleeing to England to join the RAF and continue to fight Nazis, the bombing of Britain (so much bombing!), various bomber planes (Wellingtons, Liberators, etc.), and the place of dogs in the military during war (most pets were not allowed during war, so this story is unusual).

Various secondary characters added much to my enjoyment of the story.

The quality of the writing is good, not great. The story felt heartwarming. I chuckled several times, and held my breath with worry a few times, too. The pace flowed quickly. I learned something about the war from this unlikely perspective.

However, some overused phrases (e.g., "he looked deeply into his dog's eyes") cost the book one star, along with the rushed ending. I wanted to know more about Robert's wife and son in Communist Czechoslovakia, and more about his postwar life in England.

I was totally burnt out, had been reading a lot of nonfiction re: totalitarian regimes, genocide, famines. The last thing I was in the mood for was war. I was searching for a nice, uplifting animal book. Full Disclosure: I'm a sucker for a good animal book. "The Dog Who Could Fly" came up, and Military History? With a Dog? I suddenly got my second wind and I was SOLD!
The story follows Robert Bozdech from his fateful rescue of Antis through life during the war. This is a great audiobook of a jolly decent length (not short by any means), so it's packed full with a touch of the mundane (life on base with a really lively dog, and also, just how does one go chatting up a woman on a train when your dog haaaates her?), but mostly full of the daring and dangerous missions of the servicemen.
I know that animals aren't capable of sitting back, weighing life and death decisions, but honestly. Antis seems to do just that. His absolute devotion to the men, and to Robert above all others is astounding. You'll get to know many of the men who loved Antis, and it's extraordinary how creative they were in helping to keep Antis on base, or in helping Antis to fly: in their eyes, he was one of them.
I won't throw in any spoilers, but there's one part I almost stopped listening near the end. Robert, intending well, I guess, decides there needs to be a "tough love/things-must-happen-this-way" for such and such reasons. It was horrible to listen to because things go terribly awry (Note to Robert: You can't turn love on and off like a light switch).
Listen through it, stick with this book. It's a heartwarming, exciting "read."

Wow. Wonderful. Fantastic Story. True story about a dog and his loyalty and love with his owner.

I was so captivated. Could not stop reading. A pilot Robert was shot down by the Germans in 1939. There he met abandoned puppy Antis who would die if not rescued. Robert crawled for hours to safety with the puppy in his shirt. This is one of those truth is stranger than fiction stories. Amazing things happen. It’s nonfiction but embellished with assumed/fictionalized dialogue. I liked the way that was done. It made it more enjoyable.

The story is about the dog Antis from 1939 until Hitler surrendered in 1945. The epilogue states that Antis did some heroic things after the war during Robert’s travel from Communist occupied Czechoslovakia to Britain. That was one sentence. I wish the author wrote more about that.

I’ve heard and read about psychic events here and there. I want to believe those things exist. And this book reinforces my belief. In one episode Robert is on a plane. Antis is at the base. At 1 am Robert is wounded. At that exact moment Antis began howling and grieving in a way he had not done before.

TEARS:
Antis died after a normal life span for a dog of fourteen years. Robert lived after that without Antis. At the end of the book I had a crying session. Antis lived a full life, but I still grieved.

PICTURES:
There are pictures in the physical book. I wish the author provided a downloadable pdf file for audiobook buyers.

Don't hesitate to use your credit on this heartwarming story. You don't have to be a dog lover to enjoy this true story set in WW ll. You don't even have to be a member of that generation to find it worthwhile and enjoyable..I believe high school and college students would find it "a good read". An honest look at the reality of those difficult times. You'll laugh, you'll cry,and most of all you won't want it to end.

Would you listen to The Dog Who Could Fly again? Why?

I would listen to this book again for sure. Maybe even again and again...I am sure I missed some things on the first go around. I loved the entire book.

Auntis of course! What an amazing dog! Auntis and his owner Robert became like dear friends of mine. Each day I could hardly wait to get back to them. I was sad when when the book ended.

What does Derek Perkins bring to the story that you wouldn’t experience if you just read the book?

Derek Perkins tone of voice was perfect- very pleasant. He speaks with an accent that made the setting realistic. I often felt like I was right there.

I was brought to tears when Robert made a decision to distance himself from his dog in an attempt to save is life after the dog nearly died as a result of his unwavering dedication to his master. The dog was heartbroken as Robert attempted to break the bond between man and dog. Derek speaking from the dog's point of view- expressing his confusion and sadness nearly broke my heart.

Without a doubt and already have!

Of course the dog, but they were all great. It was so nice to see how the flight guys were so close and loved each other so much.

A dog is the most steadfast friend you can have.

Great story.
It is impossible to find a more loyal friend than a dog.
I remember and miss everyone that I have had the pleasure of sharing my life with.

My 90 year old mom is very picky about books. She wants nonfiction, lively, well written, well narrated, and not gruesome or depressing. It's surprisingly hard to please her. She loved this book.

I was glued from the beginning, a narrator soothing to the ear definitely makes the difference. This story will give a non-dog owner a real picture of the love, loyalty & responsibility involved in owning a dog. Dog lover or not, this is a memorable WW11 story you will not for get, and what a dog..
So when you're having trouble finding that next really good book, you've exhausted that favorite series, remember this book. It's amazing how this dog made it through the war along with his pack.

I really enjoyed this book about a heroic dog set during WWII. A Czech soldier finds a German Shepard puppy while fleeing France after it falls to the Nazis. The dog, named Antis, is very intelligent and becomes willing to lay down his life for his beloved human, Robert, which he very nearly does several times. Antis flies many missions with Robert, and is twice wounded in flight, earning a medal. This intelligence and loyalty becomes a problem, eventually, and leads to the 20 minutes of the book I skipped. Robert decides on a course of tough love to decrease the dog's loyalty to him, with fairly disastrous results. Alerted by another reviewer, I happily skipped from about 34 minutes from the end up until 8 minutes from the end, and was saved from hearing any sadness.